Bolsonaro threatened to punch a reporter for asking a question 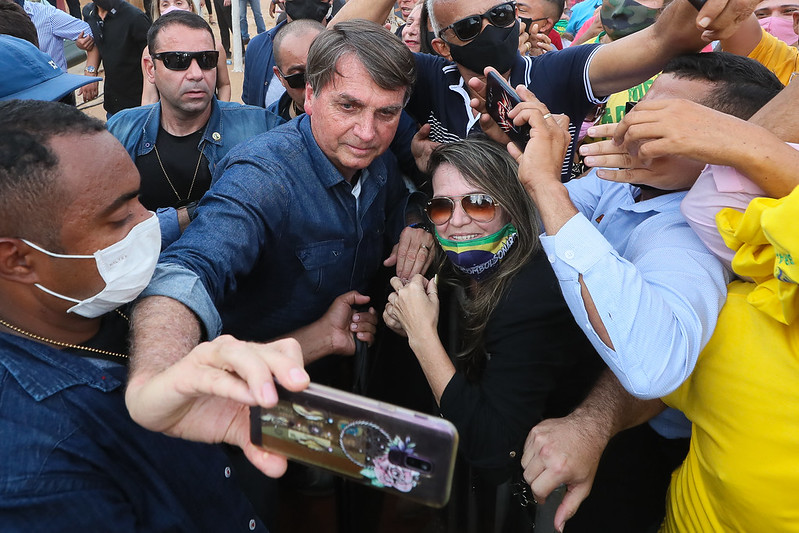 Bolsonaro, who tested positive for the new coronavirus in early July, poses for pictures with supporters during a visit to the state of Rio Grande do Norte, in August 21 | Photo: Isac Nóbrega/Presidency of the Republic/CC BY 2.0

On August 23, in the midst of the pandemic which has caused over 114,000 deaths in Brazil, President Jair Bolsonaro drew crowds at yet another public appearance in the capital, Brasília. While the president was on his way to the city's cathedral, a reporter from O Globo newspaper asked him why 89,000 BRL (approximately 15,900 US dollars) was deposited into his wife's bank account by Fabrício Queiroz, an ex-military policeman and former aide to the president’s eldest son.

Instead of answering the question, Bolsonaro threatened the reporter with the following words: “I want to punch you in the face, OK? You are shameless.”

The president’s response triggered a flood of similar queries from journalists, celebrities and other citizens on his social media accounts: Why indeed had his wife received money from Queiroz?

According to Fábio Malini, a professor at the Federal University of Espírito Santo (UFES) who researches social media and politics, by the night of August 23, 1,000 tweets were being published every 40 seconds with the question.

At the center, president @jairbolsonaro. Tagged in more than 1,035,521 messages on why he did not respond about the 89,000 deposited by Fabricio Queiroz in Michelle Bolsonaro’s account

President @jairbolsonaro, why did your wife Michelle receive 89,000 BRL from Fabrício Queiroz?

Who is Fabrício Queiroz?

The name Fabrício Queiroz is not new in Brazilian media. A close friend of President Bolsonaro since the 1980s, Queiroz came to the country's attention in 2018 for his ties to an alleged corruption scheme within the cabinet of Flávio Bolsonaro while the latter was a state representative in Rio de Janeiro. Flávio, the president's eldest son, has since become a Senator. As the BBC reports, Queiroz is “suspected of being part of a scheme to embezzle the salaries of phantom employees.”

In 2018, after an investigation revealed Queiroz had deposited a check in the amount of 24,000 BRL (approximately 4,288 US dollars) into the first lady’s bank account, the president claimed the amount was in repayment for 40,000 BRL (7,146 US dollars) he had loaned Queiroz over a period of time. Bolsonaro said the money was deposited into his wife's account because he himself didn’t have time to go out.

After authorities were given access to details of Queiroz's bank statements in 2019, a story by journalist Fábio Serapião published in Crusoé magazine at the beginning of August 2020 revealed that the deposit amounted to more than double what the president claimed it to be.

According to the Crusoé story, between 2011 and 2016 Queiroz deposited at least 21 checks totaling 72,000 BRL (US$12,853) to Michelle Bolsonaro's account. Stories published by the newspaper Folha de S. Paulo and news portal G1 reported that Queiroz’s wife also made deposits in the amount of 17,000 BRL (3,040 US dollars), in 2011, to Mrs. Bolsonaro's bank account. The total of these figures, 89,000 BRL, is at the center of current suspicions around a possible connection between the president and the 2018 scandal involving Queiroz.

Queiroz was arrested in June 2020 in connection to the 2018 embezzlement allegations but was released to house arrest shortly after due to coronavirus pandemic measures.

A hostile relationship with media

Bolsonaro has a history of outbursts against journalists, as noted in a statement released by the Brazilian Association of Investigative Journalism (ABRAJI) and organizations such as Article 19 and Reporters Without Borders.

The statement condemning the president’s threat to physically assault a reporter observes that the episode marks a new level of brutality in an already hostile relationship between Brazil’s top officer and the press. Bolsonaro's example has fuelled at least two attacks against journalists by people identified as his supporters and raised concerns about the safety of reporters covering the presidency.

A president threatening or physically assaulting a journalist is something proper from dictatorships, not democracies.

Journalists have been victims of constant verbal aggression while fulfilling their professional duty of questioning the president about the federal government actions and signs of corruption throughout his political career.

Human Rights Watch's Brazilian branch echoed this stance, saying Bolsonaro’s attitude was “a clear attempt to intimidate the media, so they wouldn’t ask questions he doesn’t want to answer”.

The president himself only spoke publicly about the episode on the morning of August 24, when he attempted to spin the incident and refocus attention on separate corruption accusations involving the Marinho family, who own O Globo newspaper. A man who was investigated for a money scheme claimed to have sold untaxed dollars to the Marinho family during the 1990s — the Marinhos denied any wrongdoing.

For at least the past 10 years the Globo system persecutes me, without proof of anything against me.

- Now, I’m waiting for explanations from the Marinho family about the plaintiff's claim the amounts larger than 1 billion BRL had been passed to them.

On the morning of August 24, at a public event about Brazil's handling of the COVID-19 pandemic, Bolsonaro slammed journalists again by complaining about the repercussions of his statement and accusing them of wielding their pens with “malice”:

My history of athleticism, the press people mock it, but when one of you fat asses catch it, your chance of survival is way smaller. You only know how to be mean, to wield your pen with malice.