“She had been smeared, red-tagged and threatened for years.” 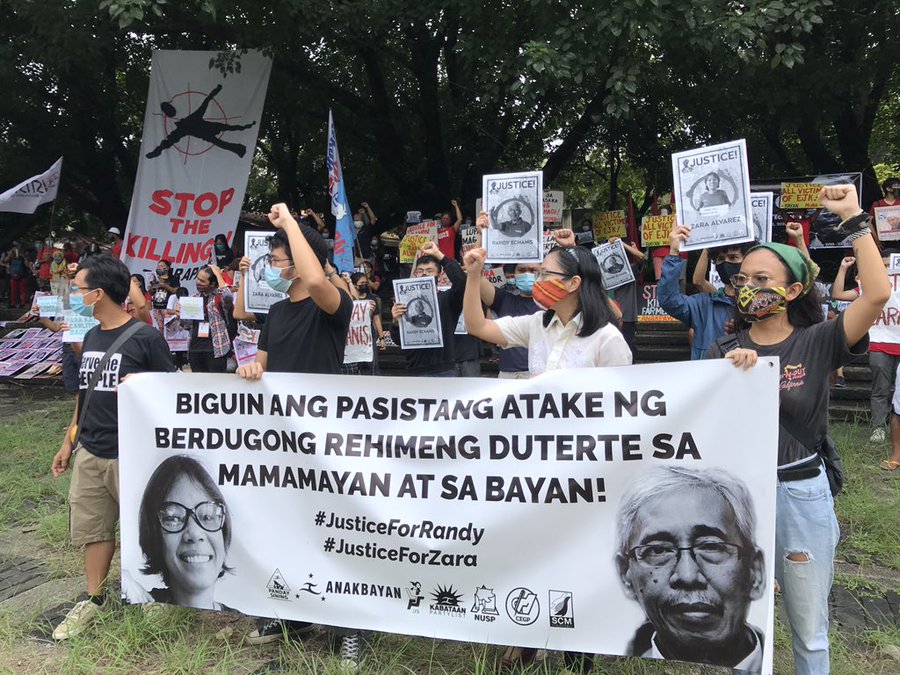 A protest action against activist killings at the Bantayog ng Bayani (Heroes’ Shrine) in Quezon City. The streamer reads: “Defeat the butcher Duterte regime's fascist attacks against the people!” Photo by Kodao Productions, a content partner of Global Voices, used with permission.

Human rights advocates have raised the alarm over continued extrajudicial killings in the Philippines.

On the same day that 72-year-old veteran peasant leader and murder victim Randall “Ka Randy” Echanis was laid to rest in Metro Manila, human rights activist Zara Alvarez was shot dead in Bacolod City in the central Philippine island of Negros. Alvarez, 39, was killed by unidentified gunmen at 8 pm on August 17 in a residential area while heading home after buying food.

Seven days before, Echanis was found dead with torture marks and multiple stab wounds in his home in Quezon City. He was chairperson of the left-wing Anakpawis (toiling masses) party and consultant for the now called-off peace negotiations between the communist-led National Democratic Front of the Philippines (NDFP) and the Philippine government.

Alvarez was not only a paralegal officer for Negros of the Karapatan Human Rights Alliance but also a community health worker with the Negros Island Health Integrated Program. Alvarez's murder has been condemned as another example of the worsening impunity under the government of President Rodrigo Duterte.

After Duterte rose to power in 2016, his government was accused of waging a bloody “war on drugs” that led to thousands of killings.

Saddened by Zara Alvarez's murder in Bacolod. Her daughter is now an orphan. The communities she served as a health worker and human rights advocate are orphaned too.

The heart of Negros bleeds again tonight, this time for a daughter who courageusly served and loved her people. pic.twitter.com/yySmhG43gO

There is now an alarming trend in the killings of activists in the Philippines.

Jory Porquia was killed in his home in Iloilo City in Panay Island last April, while Carlito Badion was killed in Ormoc City in Leyte Island last May. Porquia was the Iloilo coordinator of the left-wing Bayan Muna (People First) party which currently has three seats in Congress, while Badion was the national secretary-general of the urban poor and homeless association, Kadamay.

Presidential spokesperson Harry Roque denied government involvement in the killings of Alvarez and other activists. However, Duterte himself and some officials under his office have repeatedly made public statements supporting violence against activists and human rights defenders. Even official Facebook pages of police, military, and government agencies have been used to vilify some civil society organizations, activist leaders, and critics who are labeled as “terrorist-communists”.

Duterte, in an address to army soldiers on December 18, 2018, announced his intention of repeating in the Philippines the late Indonesian dictator Suharto’s bloody anti-communist purges that took place between 1965-1966. Suharto’s campaign led to the killings of at least half a million people. Duterte also signed Executive Order 70 institutionalizing a “whole-of-nation approach” that integrates the government’s civilian functions with the military-led counterinsurgency war against communist rebels and other “enemies of the state.”

The targeted killings and threats against activists are but the most visible expression of the overall constriction of democratic spaces in the Philippines under Duterte. This has also been marked by the passage of an anti-terror law that Duterte officials have threatened to use against critics, the shutdown of ABS-CBN, the country’s largest TV and radio broadcaster, and harassment against independent and alternative news outfits like Rappler. The military is now also pushing for the regulation of social media to thwart the use of online spaces by “terrorist organizations” to “destabilize the government”.

Alvarez was persecuted for several years

There had been no let-up in harassment and death threats against Alvarez for her human rights work. She had been labeled a “terrorist” along with 656 others in a case filed by the Department of Justice against purported communist personalities in 2018. Alvarez was a political detainee beginning in 2012 and was released in 2014 following the dismissal of all charges against her for lack of evidence. She was appealing a court decision that denied her request for protection when she was killed. Posters accusing her of being a communist rebel were being circulated around Negros at the time of her death.

UPDATE: It’s been almost a year since we filmed with Filipino human rights activist Zara Alvarez in our film ‘Duterte’s New War’. On Monday night she was killed. Watch @AJ101East: https://t.co/SeWnBtOgmJ pic.twitter.com/1jMVCO1pvf

Zara Alvarez was among the more than 600 people that the DOJ wanted to tag as terrorist in a proscription case filed February 2018. This list has been trimmed down to only 2. @rapplerdotcom https://t.co/mu8EBAUMHC pic.twitter.com/FkJHmB14gU

So terrible to hear that WHRD Zara Alvarez of @karapatan was shot & killed in the #Philippines last night. She had been smeared, red-tagged & threatened for years pic.twitter.com/yBn4rJzhch

Alvarez's home Negros Island has long been the site of land disputes between landless peasants and sugar workers, and the landed elites that own vast feudal landholdings, called haciendas, where sugarcane has been cultivated for export since the time of Spanish colonialism. The island has a long history of violence reflected in the violent crackdown on farmers calling for agrarian reform as well as land rights groups actively supporting them.

Alvarez’s brutal killing led to an outpouring of grief and outrage on social media.

Zara Alvarez was murdered tonight in Bacolod City. She was gunned down.

Zara is a human rights defender, with Karapatan-Negros.

Zara is a health worker. She is the advocacy officer of NIHIP, a community-based health program.

Justice for Zara Alvarez! Justice for all victims of extrajudicial killings and State terrorism! pic.twitter.com/GGvIVc4opk

I am deeply disturbed by the killing of Zara Alvarez and Randall Echanis in the #Philippines. Civil society spaces in the Philippines are shrinking. I call on the Philippines to investigate all killings and to protect human rights defenders.

Human rights groups join the Global Day of Action for Justice at Bantayog ng mga Bayani to condemn the killings of Negros-based activist Zara Alvarez & peasant leader Randall Echanis. Both were red-tagged, charged, and received threats before they were killed, Karapatan said. pic.twitter.com/0CXcT6QnTP