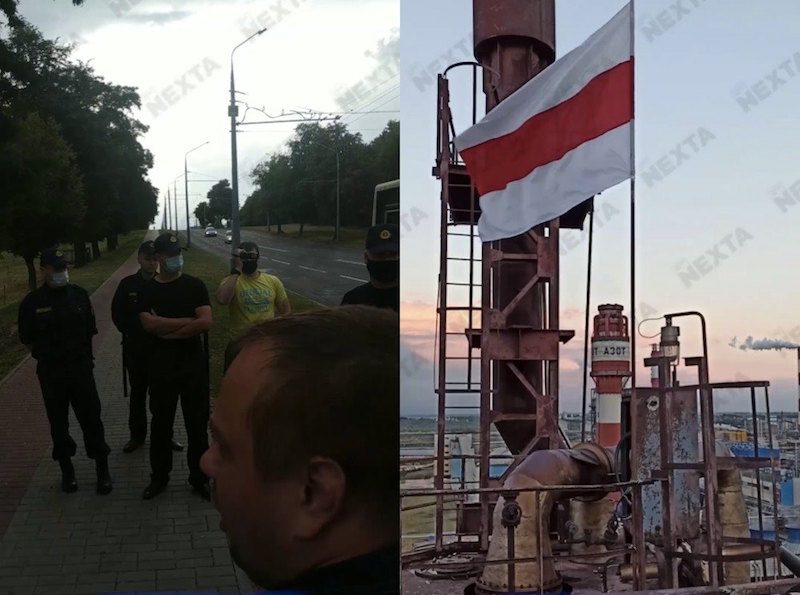 On August 26, 20 workers from Grodno Azot chemical plant were detained after walking through the city – the next day, the white-red-white Belarusian flag used by protesters was raised above the enterprise. Image from the NEXTA Telegram channel.

When Dmitry Kudelevich made his escape from the Belarusian security services, it was via the bathroom window in a KGB office in Salihorsk. “They dragged me out of my car, hand-cuffed me, put me in a minivan and took me to the KGB office,” he says in a video circulating on Telegram. Kudelevich, a member of the strike committee at the Belaruskali potash plant, continues with a smirk: “I always called on people to fight, and today you could say I had a unique opportunity to test my strengths.”

Over the past week, labour activists connected to strike committees at Belarusian enterprises have faced a pressure campaign — arrests, informal threats, and fines — from law enforcement agencies as mass protests continue in the country. These come in the wake of highly contested presidential elections on August 9, which are widely seen as fraudulent. Thousands of enraged citizens took to the streets to protest in the days that followed; Belarusian police responded with mass arrests followed by shocking violence and cruel treatment of those they detained.

Workers at state-owned industries have joined the protest movement, staging public meetings, walk-outs, threats of work-to-rule actions, and strikes. Researcher Volodymyr Artiukh points out that there have been reports of protest activity at “at least at least 70 industrial, trade and service companies as well as in the educational, medical, and media sectors” since the election. “Almost all of these are state-owned enterprises and/or publicly-financed organisations,” he says.

The protest mood appears to have worried the Lukashenka regime, given Belarus’ industries employ a majority in this country of ten million. Over the past two weeks, labour unrest has emerged at some of the country’s largest industries, including the Minsk Tractor Factory, the Belaruskali potash plant and the Grodno Azot chemical plant, which employ thousands of workers. Strike committees have circulated demands for fair elections, the release of political prisoners, and investigations into police violence.

“The state always considered workers a base of support,” comments Artyom Shraibman, a political analyst and regular contributor to Tut.By, a prominent Belarusian news website. “And the authorities, with Lukashenka at the top, were disappointed, to put it mildly, when many state factories turned away from them.”

Indeed, president Lukashenka has taken an aggressive stand. When workers at the Minsk Tractor Factory jeered the president during an August 16 visit, he retorted that they would have to “kill him” before he would re-run the election. A week later, Lukashenka called on managers not to “run after” recalcitrant workers at companies such as Belaruskali, as there were more than enough people to replace them. The striking miners at Salihorsk, he continued, could easily be replaced by Ukrainians (Mykhailo Volinets, chairman of the independent union of mineworkers of Ukraine, retorted in a video address that Ukrainian miners would not be strikebreakers).

The authorities have also urged workers not to stop work. Lukashenka himself warned workers of the same Minsk Tractor Factory that if they stopped work, foreign companies would seize Belarus’ market share; advertisements have also appeared on the website of the Ministry of Industry stating that some state enterprises “now require additional production personnel.”

“The biggest and most important enterprises were gripped by a strike and protest mood,” Shraibman continues. “But there has been, of course, a policy of frightening workers with the idea that they won’t be allowed back to work – some have already been fired to demonstrate that the threat is real. And thus, they’ve managed to stop the strike wave for the moment. If the strikes had continued and expanded, it would have been a very serious threat to the authorities – it would have been a threat to the management of the economy, and management of the country itself.”

In recent days, the Belarusian authorities have made good on some of their threats by detaining prominent labour activists. In Minsk, Anatoly Lavrinovich, a member of the strike committee at Minsk Wheel Tractor Factory, which produces military vehicles, was arrested after he attempted to collect signatures in support of a strike. And Sergey Dylevsky, a member of the strike committee at Minsk Tractor Factory and the opposition coordination council, was detained by police the same day. He was later sentenced to 10 days administrative arrest for attempting to organise an unsanctioned rally.

After calling on workers to start a work-to-rule action at Belaruskali on Monday, Anatoly Bokun, co-chairman of the strike committee at the enterprise some 100km south of Minsk, was arrested. In the days before, several members of the strike committee were contacted by local law enforcement for “conversations”, the strike committee reported. Bokun was eventually released the same day after being convicted of participating in an unsanctioned mass event. A crowdfunding project raised the money to pay his US$260 fine. Following Bokun’s detention, a Telegram channel used by the Belaruskali strike committee warned its supporters that they too could be at risk of arrest for their activities:

Dear friends and colleagues! Today Anatoly Bokun, the deputy chairman of the strike committee, was detained. At present he is in the cellars of the District Department of Internal Affairs. According to information available to us, reports will be drawn up and cases brought against all members of the strike committee of Belarusalkali for organising and participating in “unauthorised mass events”. Furthermore, reliable sources indicate that in the near future, members of the strike committee will be detained and brought to the District Department of Internal Affairs for further proceedings. Based on the current situation and the information we have, we are obliged to warn those of you on strike of the possibility that you will be detained. Be careful!

“If the authorities and plant management weren’t afraid, and everything really was how they claim it is – that we’re working as normal at the enterprise — then why would they need to do this? With their actions, the authorities emphasise once again that what we’re doing is right,” said Gleb Sandros, press secretary at the Belarusakali strike committee, when asked about the pressure campaign.

At times, pressure on strike committees appears to be more diffuse. Yulia Slivko, a plasterer at a major public construction firm in the city of Grodno, reported to the Salidarnasts newspaper that she received anonymous threats after being elected chairperson of her company’s strike committee. “They called me from an unknown number and said: ‘If you don’t keep your mouth shut, keep in mind: your son’s out and about on the street. Anything could happen.’”

Slivko was later invited for a “conversation” at a local police station, and also received a call from someone who said they were a social worker — who threatened to put her son on a register for socially vulnerable persons.

The campaign against labour activists has also born signs of the now trademark violence of Belarusian law enforcement. When veteran activist Nikolay Zimin, former head of the Belarusian Independent Union (BNP), was arrested and sentenced to 25 days for “participating in an unsanctioned protest” immediately after the elections, he was brutally beaten while in detention, the union reported. Zimin, now released, was not permitted access to medical treatment while in detention. On August 25, Zimin was convicted in Salihorsk of participating in an unsanctioned protest, and presented an administrative fine of $460.

Independent trade unions have faced harassment for many years in Belarus. But regardless of who organises them, it seems that the authorities are not prepared to tolerate political disputes reaching the workplace. As Belarus’ Prime Minister Roman Golovchenko argued in an August 20 interview, the Belarusian constitution only guarantees the right to strike over “labour and social disputes.”

“After a wave of detentions among labour activists and threats to workers, the strategy of emerging labour organisations in Belarus has shifted to so-called ‘work-to-rule’ tactics,” says Artiukh. “It is not clear yet how successful this strategy will be given the ample arsenal of punitive tools that management has — from withholding bonuses to threats of financial and criminal responsibility.”

“Given the slow pace at which strike committees and labour organisations are being set up on the one hand, and their extreme vulnerability to pressure from both enterprise management and state authorities on the other,” Artiukh continues. “I would not expect more significant work disruption at state-owned enterprises in the near future.”

At Belaruskali, Gleb Sandros is realistic about the chances of the strike committee. “If the economic crisis in Belarus, which we can now justifiably talk about, intensifies, then this will motivate more people — and I mean workers — to wake up, take a sober look at the situation and their conscience,” he says.

This article was produced in collaboration with oDR, openDemocracy's section on Russia and the post-Soviet space