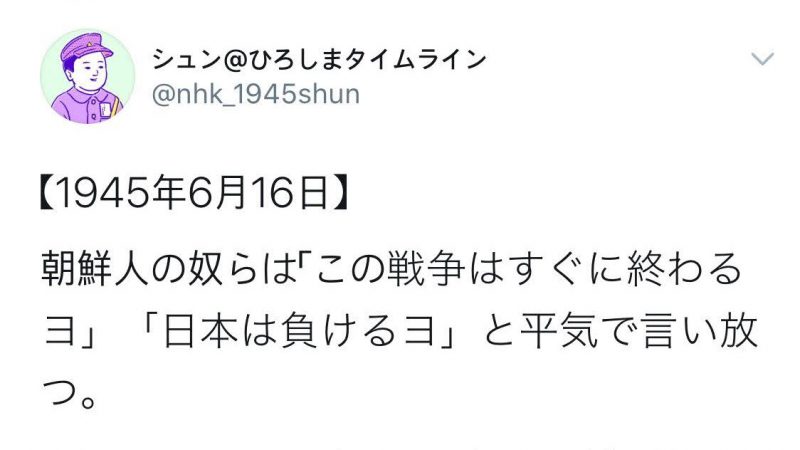 “Those damn Koreans (朝鮮人の奴ら) are openly taunting us, saying “The war's going to be over soon” and “Japan's going to lose, you know.” Excerpt from Hiroshima Timeline tweet on June 16, 2020. Screenshot of Tweet has been cropped, with full tweet embedded below. Image widely shared on social media.

An innovative NHK project about the August 6, 1945 bombing of Hiroshima has come under scrutiny for using racist epithets to describe Koreans, political interference, and for potentially fabricating historical source material.

NHK's Hiroshima Timeline project, dubbed, “What If They Had Social Media In 1945” (もし、75年前にSNSがあったら) features tweets based on the diary entries of three people who lived through the bombing of Hiroshima in August 1945. Regular people in Hiroshima, including high school students, have helped write the daily tweets and hundreds of thousands of people have followed along and engaged with the project on Twitter. Daily tweets about life in Hiroshima in 1945 are planned until the end of 2020.

In August, however, observers in Japan and around the world noticed the NHK-sponsored project was using a racial slur to describe ethnic Koreans who would have lived in Hiroshima in 1945.

So the NHK, Japan's largest TV station, set up an official account commemorating the 75th anniversary of Hiroshima bombing, and their idea of commemoration is using a racial slur against Koreans who are supposedly terrible people for rooting for Imperial Japan to lose WWII.

The slur, chosenjin (朝鮮人), is used by the persona of Shun (hereafter referred to as @nhk_1945shun), a 12-year-old boy and one of three characters whose diary entries are shared in NHK's Hiroshima Timeline project.

Those damn Koreans (朝鮮人の奴ら) are openly taunting us, saying “The war's going to be over soon” and “Japan's going to lose, you know.” Although I felt myself giving in to my anger and was going to taunt them back, I finally just felt overwhelmed. Anyway, I couldn't even find a suitable retort for the Koreans, so I just bit my tongue.

About 2 million Koreans resided in Japan in 1945. Some had settled in or had been brought to the country after Japan colonized Korea in 1910, while between 1939 and 1945 up to 800,000 Koreans were conscripted during the war to work in Japan's wartime industries. In 1945, an estimated 80,000 ethnic Koreans lived in Hiroshima, at least 30,000 of whom would die immediately in the atomic attack.

About one million ethnic Koreans still reside in Japan, and still experience discrimination.

According to Twitter user “Tomoka Phenomenon” (ともかﾌｪﾉﾒﾉﾝ, referred to hereafter as Tomoka) NHK's Hiroshima Timeline project appears to have published at least four different tweets that included the term chosenjin (朝鮮人), including the following:

The Koreans are coming!

A horde of Koreans, acting as if they have just won the war, are on their way (to Hiroshima) by train from Osaka!

Since the tweets sent by the three Hiroshima Timeline Twitter accounts are supposed to be based on actual diary entries by three real people in Hiroshima in 1945, Tomoka searched through Shun's original diaries to find some context for the tweets about Koreans.

I started to wonder just how much Shun from #Hiroshima Timeline had actually used chosenjin in his diary. First, I searched the @nhk_1945 on June 16 (1945) for tweets that included chosenjin. I found three. Following up, I took a look at that day in 1945 to find out what happened Shun (to make him disparage Koreans). However, there was no mention of Koreans in his diary […]

The Mainichi Shimbun also reported that Shunichiro Arai, the real person upon whom the @nhk_1945shun's tweets are based, never made disparaging or racist remarks about Koreans in his diaries:

Diary entries by Shunichiro Arai, whose writing forms the basis for Shun's tweets, are being published on the Hiroshima Timeline official website, but there is no mention of “Korean people” in the original text. As a result, one user has commented on Twitter, “I'm not sure to what point this is historical fact, or to what point it is imagined; there also aren't explanatory notes.”

Besides the dubious decision to use the epithet chosenjin in the Hiroshima Timeline project, Twitter user @wayto1945, who publishes a blog that takes a comprehensive look at Japan's colonization of the Korean peninsula, said that the Hiroshima Timeline tweets about supposed ethnic Korean impunity in the dying days of the war are historically incorrect.

Instead, even following the end of the war, ethnic Koreans in Hiroshima still regularly experienced violence. A tweet published on August 21, 2020 by the @nhk_1945shun account includes potentially fabricated content that misrepresents the dangers ethnic Koreans in postwar Japan actually faced:

I did not have the will to stop crying. At one moment, our own defeated veterans push their fellow Japanese civilian countrymen off the train (to make room). In the next moment, the Korean “victors” pull Japanese passengers off the train with impunity, and no one can resist. How wretched.

Far from there being no resistance, there were 37 incidents of Korean massacres over the course of the year following the end of the war until August 1946, as police clashed with organized gangs and intervened in coal mine disputes, etc.

According to the records of the Choren (one of the main ethnic Korean associations in Japan at that time), it was feared that, following the defeat, Japan would see another massacre of Koreans like what happened after the 1923 Great Kanto earthquake (when at least 6,000 ethnic Koreans were killed in mob violence).

In response to growing online criticisms, the official NHK blog for Hiroshima Timeline explained that the tweets made by the three Twitter accounts are actually composites, and were based on interviews and diary entries made by multiple people who experienced the end of the war, a fact not originally made clear on the Hiroshima Timeline website.

NHK explained that @nhk_1945shun's tweets, while not always based on diary entries made by the real Shun, who did exist in 1945, are instead intended to represent how many boys his age must have felt at the end of the war, to answer the question, ‘What kind of things might this person have posted on social media?’

In order to illustrate the saga of a junior high school experiencing the defeat in war, and to help younger generations understand the confusion of that time, (the Hiroshima Timeline creators) included actual expressions used by people we interviewed for the project.

The answer, NHK seems to indicate, is that people would have posted hateful comments about Koreans if social media had existed in 1945.

Back on Twitter, Tomoko also questioned how much oversight there was over Hiroshima community participants who crafted some of the tweets, none of whom are trained historians, all collaborated to create @nhk_1945shun's tweets. If the diaries didn't include any mention of Koreans, who directed the team to include the racist term?

Using screenshots, Tomoka also notes that “Yamaneko”, a pseudonym of one of the Hiroshima citizens who helped craft Shun's tweets, says they “received advice from” a public servant (公務員) identified as Ito Naoto, an employee of the Ministry of Economy, Trade, and Industry (METI). Ito, in turn, on a social media post screenshotted by Tomoka, states he received “valuable advice” (貴重なご意見) from a Hiroshima municipal assembly member Toyoshima Ganpaku.

What sort of opinions did a local politician give to people connected to a public broadcaster?

Toyoshima Ganpaku made the national news earlier in July for receiving cash payments from disgraced former Japanese Justice Minister Kawai Katsuyaki, who was arrested after a vote-buying scandal in Hiroshima prefecture.

Twitter user Tomoka, who spent considerable effort unraveling who might be responsible for the racist content, also notes that, according to the Hiroshima Timeline project page, the primary technical experts guiding the creation of the tweets were two playwrights, rather than historians, and their primary motivation may have been to create drama, rather than historical accuracy.

I'm not trying to say the project supervisor and the other people who worked to make it are bad. There job was to create a “narrative”, which is what they're paid to do. However, asking a director or an actor to play the role of an actual historian is like going to a greengrocer to buy a fish.

The real problem is @nhk_hiroshima (which was involved in commissioning and managing the project) asked a greengrocer to lecture us on “what makes a good fish” in the first place.