To accept Beijing's interference or to boycott the LegCo? Lawmakers face a double-edged sword 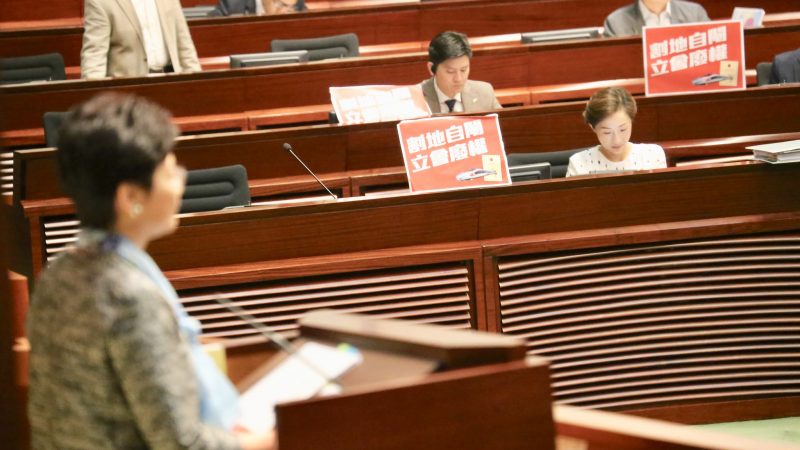 Hong Kong was scheduled to elect a new LegCo on September 5. Lam's decision comes in the wake of the controversial disqualification, in July, of 12 pro-democracy candidates from running, and Beijing's growing encroachment on the city's governance.

A controversial aspect of the postponement is the resulting year-long gap between the end of the current LegCo mandate and the election next year will be filled. To solve this, the Chief Executive has requested that Beijing's National People Congress (NPC) to make a determination, the latter decided to reappoint all sitting legislators for “at least one more year”.

The intervention by the NPC, even if theoretically a formality, has pro-democracy legislators facing a double-edged sword.

Accepting an extension granted by Beijing's NPC could be seen as a surrender to the mainland. On the other hand, rejection will mean, in practice, a boycott of the LegCo — thus giving pro-Beijing lawmakers free rein to pass any laws.

The quandary has thrown the pro-democracy camp into fierce disagreement; a split now seems inevitable.

The localist parties, a more radical subset of the pro-democracy group, are leaning towards a boycott. Lawmaker Ray Chan explained on a tweeter thread why he is against the NPC appointment:

I refuse the National People's Congress’ appointment to serve for another year. I did not resign from #LegCo. I boycott the term extension. The reasons behind my decision are simple. First, our mandate ends in 2020. Without a new mandate, serving beyond our term is illegal & illegitimate. […] Second, accepting the appointments means accepting the authority of the failure aka Carrie Lam Government & the Leviathan aka National People Congress to arbitrarily change the term of LegCo members. It'll open the floodgate for all kinds of meddling for years to come.

Later, Chan backtracked on his stand and said that he will make a definite decision once he hears from the public.

On the other hand, the Democratic Party and the Civic Party, a more conventional pro-democracy subset with majority of their members coming from professional groups, are inclined to stay in the LegCo. The former chair of the Democratic Party, Albert Ho explained his stance on an interview with a local online news outlet:

We should, by all means necessary, protect the rights of citizens, safeguard our values, and reasonably oppose changes… Are we to give up our chance to raise oppositional voices? If they want to pass unreasonable law or to waste taxpayers’ money, someone has to condemn the decision in the LegCo.

The pro-establishment and pro-Beijing camps have been advocating for a number of contentious issues in the past few months. They include radical changes on the function of the district councils, allowing Hongkongers based on mainland China to vote, implementation of the color-coded health system in the city, and a constitutional reform that would change the rules of the election of the Chief Executive starting in 2022.

If the pro-democracy camp is absent from the LegCo, those bills, which democracy advocates consider draconian, are very likely to pass.

While political scientists argue that a boycott of the LegCo will lead to the marginalization of the opposition and the consolidation of authoritarian power, localists defend it on moral grounds — they insist that lawmakers should not join the LegCo without a people's mandate.

Some localists have added that with the massive disqualification of pro-democracy hopefuls during the nomination period the opposition should give up institutional politics altogether.

Naturally, the debate spilled over to social media, with exchanges occasionally turning bitter as some users labeled pro-democracy lawmakers in favor of NPC’s appointment as “immoral traitors.”

It is against that backdrop that localist lawmaker Chu Hoidick called for an opinion poll or a public referendum on the matter.

While the Democratic Party has listened to those demands, it insists on a more deliberative and scientific approach:

On whether current legislators should stay or boycott the legislature coming year, the Democratic Party will base our decision on a scientific poll. We hope there will be at least one debate between 2 sides to allow HK people a well-informed choice before the poll is conducted. pic.twitter.com/ZBXc2QPRRq

Meanwhile, many fear that a split between localists and democrats, in the context of diminishing freedom of dissent in Hong Kong, will be very damaging to the city's opposition forces — regardless of the politicians’ ultimate decision on whether to stay or boycott the extended LegCo.