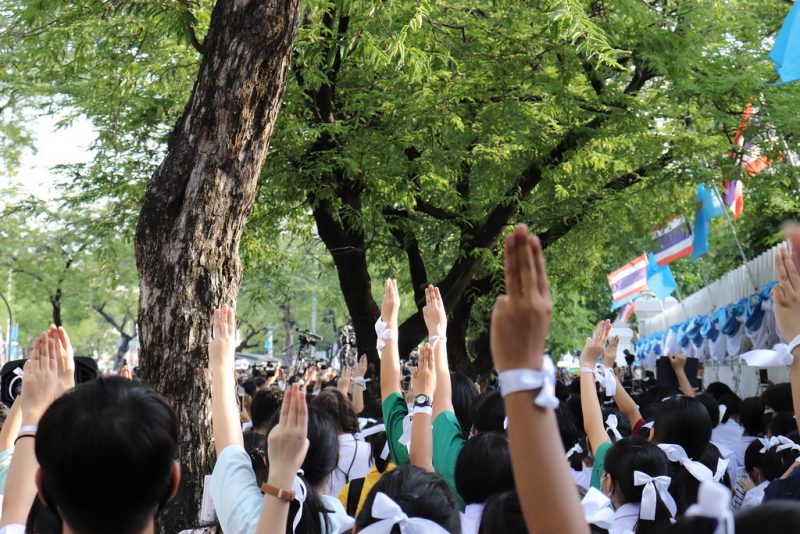 Students raising 3 fingers with their arms tied with white ribbons. Photo and caption by Prachatai English, a content partner of Global Voices. Used with permission.

Students across Thailand have been organizing massive protests demanding [2] “an end to the authorities’ harassment of citizens, the drafting of a new constitution, and the dissolution of parliament.”

The biggest rally [3] to date took place on August 16, when more than 20,000 people assembled at the Democracy Monument in Bangkok, in defiance of government restrictions.

READ MORE: About Thailand's political crisis, the rise of the military-backed government, and the 2014 coup [4]

Protests are taking place while the country is under a state of emergency. The government has banned mass gatherings, allegedly to contain the spread of COVID-19. Authorities have threatened to arrest participants and charge them with undermining public health, safety, and security.

In response, students have come up with creative means of circumventing the restrictive rules, turning activities such as garden walks, washing the dishes, dressing up as Harry Potter characters, and using the three-finger Hunger Games salute into protest actions. These events have attracted the participation of many young protesters, in addition to grabbing national media attention.

During a student-led rally at Bangkok's Democracy Monument on July 18, government personnel placed potted plants and flowers in the area, more than likely to prevent people from gathering around the historical symbol. Despite this barrier, the protest was successfully held and attracted [5] the participation of around 2,000 people.

Organizers of the protest returned to the monument on July 21 and invited the public to gather and walk around and appreciate the plants. Group leader Siriphob Poomphungphut told [6] Khaosod English:

This garden is (a) waste of taxpayer money. I can’t see the beauty out of it because it obstructed those who were calling for democracy.

Police officers face off with a group of anti-government activists at Democracy Monument, where the campaigners insist they were there not to protest, but to visit the garden planted around the monument. #Thailand [7] #KE [8] #เยาวชนปลดแอก [9] pic.twitter.com/aTo6qohaKa [10]

The assertion [2] made by a ruling party legislator on social media that “everyone wants to help the country, but no one wants to help mom wash dishes” inspired some protesters to gather in front of Government House on July 30, where they symbolically washed [12] several “dirty dishes” such as the defence budget and the lack of funding support for people and new graduates gravely affected by the pandemic.

The last dish washed bore the image of Prime Minister Prayut Chano-cha, the army general who led the coup in 2014. One of the protesters said [13] during the rally:

Every problem originates from Gen Prayut himself. If this dish cannot be washed, let’s break it.

Student activists wash dishes bearing images of PM Prayut Chan-o-cha in front of Government House today in a jab to a pro-government politician who advised the protesters to “help their mom wash dishes” instead. #Thailand [7] #KE [8] #เยาวชนปลดเเอก [14] pic.twitter.com/wekt6xalp0 [15]

Harry Potter and the military junta

Around 100 students gathered in front of the Democracy Monument on August 4 dressed [17] in various Harry Potter-inspired costumes. Participants used characters from the popular series of novels to denounce the lack of democracy under the military-backed government, as well as the need to reform laws relating to the monarchy.

One of the participants addressed the lèse-majesté (anti-Royal Insult) law, which has been used to detain critics of the royal family.

We are sick of this. This has been going on for generations. Why can’t I talk about something in my own country? About something that’s so prevalent for every Thai around here?

In the tweet above, the activist dressed like Harry Potter is Anon Nampa, who was arrested by the police for his role in the protest movement. The pilot of the fighter jet represents the prime minister.

Since 2014, Thai protesters have adopted [32] the three-finger salute from the Hunger Games films as a symbol of defiance against the junta.

Students continued to use the sign this year as they press for democratic reforms.

Many have been flashing the sign while the national anthem is being played in their schools. They are also wearing a white ribbon on their arms to protest the forced disappearance of some activists.

On August 20, around 500 students trooped to the Ministry of Education to protest the prohibition [33] of political expression in some schools, in particular, the use of the three-finger salute in campus activities. Students defended [1] their right to air their views about what’s happening in the country.

Several protest leaders were arrested [34] a day after the massive August 16 rally in Bangkok, and charged with sedition, illegal assembly, and breach of the emergency decree in relation to their participation in the rallies held last month.

By all means, the July 18 rally was a peaceful demonstration. Arresting these people for their pro-democracy activities raises the question of whether the crackdown was against the principles of free speech endorsed by the kingdom's constitution.

More importantly, police who are handling their cases must tread carefully. Since it's apparent those arrested have no intention of escaping the law, any harsh action will cause unnecessary anguish.

The youth-led anti-government rallies are certainly testing the limits of society on many levels. Coupled with the Covid-19 crisis and economic challenges, the situation calls for inclusiveness and tolerance as we learn how to move forward together despite differing views.

Students expressing their political standpoint in schools may be an unprecedented phenomenon, but it's nothing to be feared.