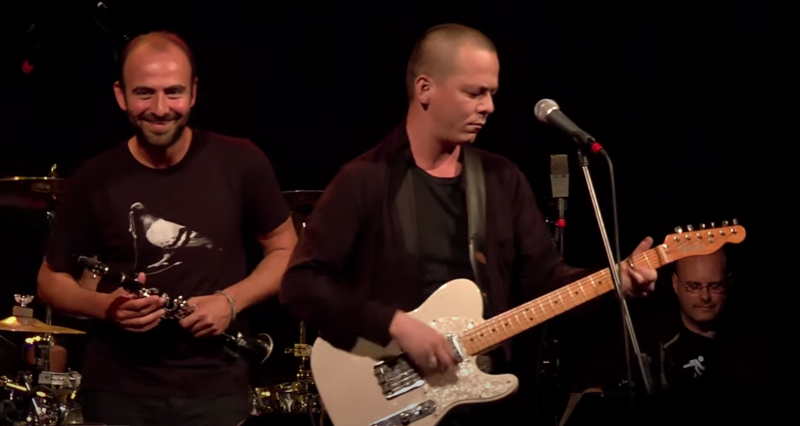 Concert with Uyghur musician (the one holding the guitar) Perhat Khadiq from the group Qetiq. Screenshot from YouTube video.

In many societies living under oppression and cultural denial, music is often the only space and form of resistance. This is particularly true for the 11 million Uyghurs in Western China, and the many thousands now forced to flee their homeland.

To understand how music has become an essential source of visibility, I spoke to Elise Anderson, an expert on Uyghur language and music who spent years in Xinjiang, and now works as a Senior Program Officer with the Uyghur Human Rights Project.

Filip Noubel (FN): Music and dance have become a cultural battleground between Uyghurs and the state. Could you explain why?

Elise Anderson (EA): Over the past few decades, Uyghur music has been a means of political resistance as much as it has also been a form of entertainment and artistic expression, a well of spiritual nourishment, and an object of state institutionalization. To some extent, the Chinese state has been central in shaping Uyghur music: for the past seven decades, Uyghur artists and producers have had to work within the strict confines of what the censors allow.

Still, Uyghur musicians have long used metaphor and symbolism to make political messages through their music. Whereas these messages could be more explicit in the 1990s, when Kuresh Kusen sang “Don’t sell your land” to Uyghur farmers, increasingly hard-line state responses to political dissent from the late ‘90s on meant that Uyghur artists had to be more creative. Even as recently as 2015 and 2016 these messages appeared onstage and in recordings, where Uyghurs performers sang of “the homeland” and “my people.” These coded messages seem to have disappeared since 2016.

The Chinese state has long stereotyped non-Han peoples like the Uyghurs as “musical.” A positive of the stereotyping is that it has allowed musical spaces to flourish as a forum for expression, making performance events a rare civil society-like space for Uyghurs. A negative outcome of this stereotyping is that it has often served to reduce Uyghur music to flat, sketchy versions of itself, and to erase Uyghurs from their own music-making to an extent. We’ve been seeing this lately in videos from state-run social-media accounts sharing videos of singing, dancing Uyghurs–as if singing and dancing are inherently Uyghur or somehow disprove the fact of China’s oppression. Many diaspora Uyghurs find these depictions deeply problematic and offensive.

FN: Your focus is on Uyghur pop music. Could you explain its origins and the way it is performed and circulated?

EA From the start, my academic research and performance focus were on what we could think of as “traditional” or “classical” music, the genre known as the “on ikki muqam” [The twelve muqams]. Yet, from my earliest encounters with Uyghur music, I found myself drawn to popular idioms as well. Uyghur pop has diverse influences, some of which link it to the broader whole of Uyghur music. For instance, the folk repertoire, which boasts thousands of songs with often playful and rhyme-driven lyrics, remains a source of content for the pop-style music performed and beloved at wedding celebrations and nightclubs. The technical aspects and melodic characteristics of muqam are similarly an influence in the melodic lines of some pop, and there is a lot of crossover between musicians who perform across genres and styles.

But “international” pop musics have long been sources of inspiration for Uyghur pop, with influences from Uzbekistan, Turkey, and other lands to the West of the Uyghur Region. Other sources of influence are perhaps less intuitive: flamenco, reggae, diva ballads, K-pop, jazz, rap. These borrowings and fusions began in earnest with the arrival of cassette technologies to the region in the 1990s and then accelerated in the 2000s and 2010s, particularly as the internet helped sound and video to make their way around the world with speed and ease. We could say that Uyghur pop is, for at least some of its practitioners, a cosmopolitan practice.

Here is an example of an Uyghur rock singer, Perhat Khaliq, who sings under the band name of Qetiq, in Uyghur but also Kazakh and mixes different styles on music:

FN: Some of the Uyghur singers and musicians have cult status. While some are allowed to perform and sell their music officially, others are in exile, have self-censored, or have been detained. Could you give us some examples and what they come to represent in the eyes of the Uyghur public?

EA Undoubtedly, Abdulla Abdurehim has the highest cult status among all performers of Uyghur pop. Abdulla, who is a master of puraq, the melodic ornamentation central to Uyghur musical aesthetics, has been performing since the 1990s. While he doesn’t appear to have performed much over the past few years, he has released some new music and recently even livestreamed an entire concert via Douyin, the domestic Chinese version of TikTok.

Abdurehim Heyit, a singer-songwriter and performer of the dutar (a two-stringed long-necked lute), is not quite as beloved but is perhaps held in even higher regard. Abdurehim was detained by authorities in early 2017. In February 2019, after a rumor spread from Turkey that he had died in detention, Chinese authorities responded to international outcry by circulating a proof-of-life video.

Sanubar Tursun, also a highly regarded singer-songwriter and master dutar player, disappeared into detention as well. She went silent in 2018, when she was slated to perform a series of concerts in Europe. Authorities in China neither confirmed nor denied her detention, however, despite international pressure. Sanubar, who studied at the Shanghai Conservatory and collaborated widely with Chinese and international artists, resurfaced in public performances in Urumchi in late 2019. Countless other beloved musicians, including but not limited to Parida Mamut, Rashida Dawut, and Ablajan Awut Ayup, have disappeared at one point or another.

Self-censorship has been heart-breaking to see. I have seen examples of Uyghur musicians “performing loyalty” by setting political lyrics in Chinese language to Uyghur-style melodies, singing entire songs in praise of Xi Jinping, and penning pro-Party essays. Live concerts, which had already decreased drastically in frequency after 2014, appear almost non-existent.

Of course, Uyghur musicians in the diaspora have long been performing outside China. Prominent examples include Kuresh Kusen, who lived in Sweden, and Sultan Memet, a Uyghur who grew up in Uzbekistan and moved to the United States. In recent years, musicians have formed ensembles in Australia and Europe, and Uyghur youths are performing rap and other styles of music across the globe. Performers are also active in Central Asia, where there have long been large Uyghur communities: Saniyam Ismail (Kazakhstan) and Nazugum Ayupova (Uzbekistan) immediately come to mind.

FN: As Uyghur culture and language are coming under systematic attack by the Chinese state, what role can Uyghur pop music play today?

EA  Uyghur pop can play several roles as the culture continues to be under attack: as a vehicle for expression and production in the Uyghur language. While the space for Uyghur language in formal schooling has been so drastically reduced that it remains only as a token gesture, musicians do appear to have continued making music in Uyghur. The environment in which they make that music is changed, and the circumstances of censorship I mention above pose difficulties, yet the language remains alive.

Pop can also continue to play roles as a source of both entertainment and rich inner life. These are deeply important for the millions of Uyghurs who are experiencing unimaginable trauma. And this point holds for Uyghurs in the diaspora as much as for Uyghurs in the homeland.

Another role pop music can play is in humanizing and amplifying Uyghur hopes, aspirations, and lives. Increasingly, I’m convinced that we get so caught up in arguing about the precise number of the detained that we forget about the human lives being destroyed in this crisis. Pop music can give us ways to understand those lives, to see who Uyghurs are and how they aspire to be part of the world. Similarly, pop can also help us to see that Uyghurs are so much more than the happy-go-lucky song-and-dance people of Chinese stereotypes. To be Uyghur can mean many different things, and the diverse influences and content of Uyghur pop give voice to some of those differences.