Lukashenka or Lukashenko? Why Anglophone media use different spellings for the embattled Belarusian leader

The answer: It depends. 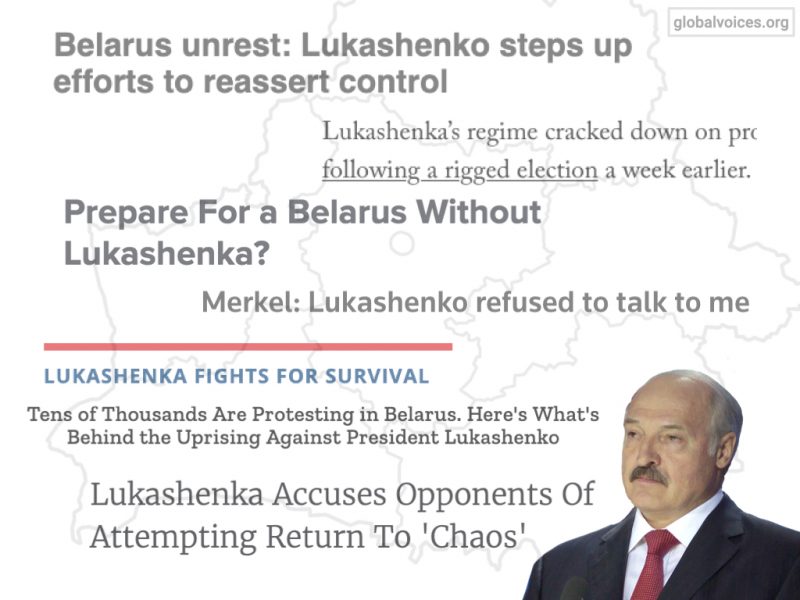 As Belarus is making worldwide headlines since the controversial August 9 presidential elections, different spellings of the surname of the longtime president have emerged in the international press. Lukashenka or Lukashenko: Which is correct?

Both Russian and Belarusian have official language status in the Republic of Belarus, where the population is mostly bilingual to varying degrees. While the two languages are often mutually intelligible, as both belong to the eastern branch of Slavonic languages, they are nevertheless distinct. Today, Belarusian can be seen and heard ceremonially at state functions and on street signs and government ministries across the country. However, much of daily life in the large cities is conducted in Russian, and the presence of Belarusian has waned in recent years, in part due to its declining role in the state educational system.

A similar distinction can be observed with the surname of the leader of the opposition: her name is Sviatlana Tsikhanouskaya in English, romanised from the Belarusian Святлана Ціханоўская. But she becomes Svetlana Tikhanovskaya when transcribed from the Russian spelling, Светлана Тихановская.

As protests have spread across the country, we might also ask about the spelling of various Belarusian cities. Did workers strike in Grodno (Russian) or Hrodna (Belarusian), did protesters demonstrate in Gomel or Homyel? International media have at times spelled Belarusian place names inconsistently.

To complicate things, Belarusian, while now written in Cyrillic, does also have its own Latin alphabet that was used in the 19th and early 20th century, called Łacinka, as well as during the Nazi occupation of Belarus in the early 1940s. A further spelling standard known as Taraškevica is used by some Belarusian speakers abroad; it uses much the same Cyrillic alphabet as standard Belarusian today, but rejects some of the Soviet government's linguistic reforms of Belarusian in 1933.

Furthermore, from the 15th century, the Tatar Muslim minority living in the Grand Duchy of Lithuania that included today’s Belarus also wrote Belarusian using an adapted form of the Arabic script , called Кітаб [Kitab] or ارابیصا [Arabitsa] as they gradually abandoned their mother Turkic language and adapted the Slavonic Belarusian language, while remaining faithful to Islam.

This debate may remind some readers of Ukraine, Belarus’ neighbour to the South. After the events of 2014 and subsequent war in the country's East, the country occupied ever more column inches in international newspapers. Heated debate has led to several publications declaring that they would spell the country's capital, previously Kiev, with the Ukrainian transliteration as Kyiv. Russian is spoken fluently by millions in Ukraine, many of whom are ethnic Ukrainians, but it is not an official language — hence the eastern cities of Kharkiv and Luhansk are by convention spelled in their Ukrainian forms, rather than Kharkov and Lugansk, as many of their inhabitants would call them.

Belarus’ political and sociolinguistic situation is very different from Ukraine. But these issues will continue to bedevil editors across the world. Some of the German press continues to refer to the country as Weißrussland (literally “White Russia”) rather than Belarus, as Belarusians prefer. The country is widely called Белороссия (Byelorussia) in the Russian press, despite Belarusians’ objections.

Moments such as these will continue to force editors across the world to consider to whom they are accountable — to state language policy, to the linguistic practices of a country's inhabitants, or to foreign readers who often know faraway places by entirely different, sometimes archaic, names? There are not always easy answers. But when the world's attention is fixed on a country which is unfamiliar, transparency is the best policy — allowing readers to understand how a single letter can matter.