‘Lukashenka's time is over': a Belarusian writer urges solidarity from afar 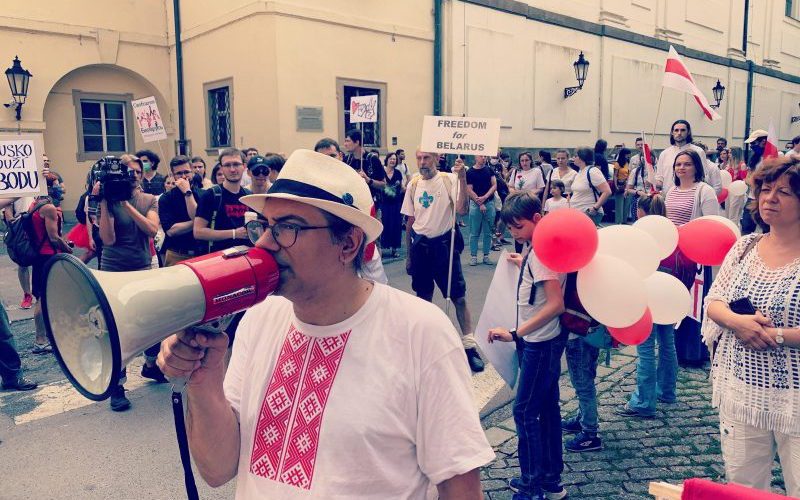 While one of the smallest minorities in the Czech Republic, they have played a major role advocating for domestic changes in their homeland. When protests broke out in Minsk against electoral fraud, prompted by an attempt by President Alyaksandr Lukashenka to stay in office for a sixth consecutive term, they organised demonstrations in solidarity, lobbying Czech politicians and raising awareness in the media.

Belarus has a total population of nearly 10 million people, yet another two to three million people claiming Belarusian ancestry live outside of their home country. Throughout the maelstrom of history, Belarusians have left their country primarily for religious and economic reasons. Czechs and Belarusians are no strangers: in the 16th century the scholar and early book printer Francysk Skaryna lived and worked in Prague, where he laid the foundations of the literary Belarusian language. Later, Belarusian writers and artists moved to Czechoslovakia in the aftermath of the Russian Revolution in 1917. Today, new generations of Belarusians have migrated to the Czech Republic for economic and educational reasons. In July 2013, the Czech government added Belarusians to the official list of 14 ethnic minorities who are guaranteed political representation and special educational, cultural, and media rights.

Max Ščur is one of these Belarusians. The poet, novelist, translator, literary and environmental activist has spent over two decades in the Czech Republic. He now writes in both Belarusian and Czech, and in 2016 won the Giedroyc Prize, a prestigious Belarusian literary award, for the best Belarusian novel of the year. He is also the founding editor of Litrazh, an online Belarusian-language literary magazine.

Ščur has been particularly active in organising Prague's Belarusian community in the aftermath of the August 9 presidential elections. He has coordinated several demonstrations in the Czech capital, such as one on August 15 which began in the city's historical centre, next to Skaryna's memorial plaque on the walls of the Clementinium, a former Jesuit college which hosts a Slavonic library. I spoke to Ščur to learn more about Belarusian diaspora activism and his hopes for change. The interview has been edited for style and brevity. 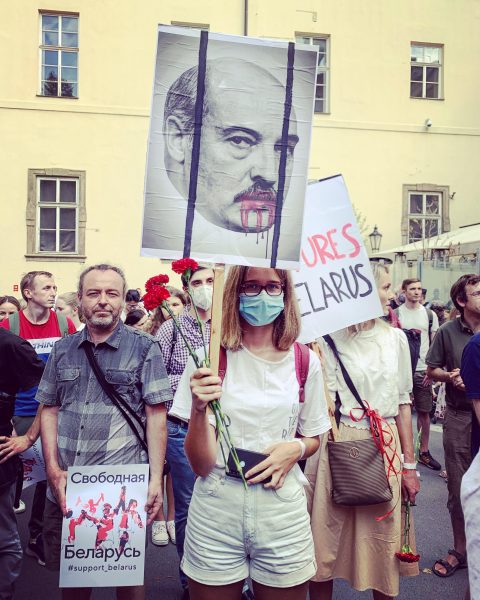 Filip Noubel (FN): How would you describe what is happening in Belarus today? This is not the first time there have been anti-Lukashenka demonstrations, but what's different this time?

Max Ščur (MŠ): This time, it is a people’s uprising. The protest is peaceful, but it is so unanimous that you could use the revolutionary term “levée en masse”, in other words, a total mobilisation.

FN: Fear and hope are two words often used to describe Belarusian society. How do you explain this sudden resistance after so many years of political apathy? Would you say that society is divided over Lukashenka or does one camp dominate?

MŠ: I think that Belarusian people, without even knowing it, act according to what the Chinese call the “wu wei” (無為) principle of non-action. According to Taoist philosophy, an action should be in harmony with the spirit of the time. When the spirit of the time changes, everybody knows it. In the same way, anyone knows when summer eventually becomes autumn: people just feel it, they know time for harvest has come. Trying to do something before the right time comes would be unfortunate. This was my case some 20 years ago, when I was young and wanted things to be different for everybody, while in fact caring but mostly about myself. In the end, I had to leave Belarus. Now everybody wants things to be different for everyone, and that makes a big difference. Belarusian society is not divided, because the issue is not about politics, but rights and the humane way of doing things.

FN: You are a writer in Belarusian and Czech, a publisher and translator, and a Belarusian literary activist. What is the social role of Belarusian writers today?

MŠ: There are so many different characters… Writers in general do their best to be “intellectuals”, this is why they trust their intellect too much. Sometimes it misleads them and makes them choose wrong answers to simple questions. Which in turn often leads to disagreements. We all have different tastes and preferences, we all want to be “interesting”. But right now, all the Belarusian intellectuals are united and one with the Belarusian people. This may sound like an empty phrase from the Communist times, but it’s true. Only ideological fundamentalists, by which I mean nationalists, keep their distance from what’s going on, because they can’t recognise that they were wrong about their own people for all these years under Lukashenka's regime. All the others, where liberals, anarchists, avant-gardists or traditionalists, stay united.

The role of writers in the times to come will be that of peacemakers and interpreters; those who can understand and reconcile different parts of society: workers and businessmen, Belarusian and Russian speakers, and so on. I’m afraid that not many of them will be able to fulfil this role. I expect that their egoistic ambitions will prevail over the common needs of the people, because such is the nature of an “author” in the West. So, there will still be lots of disagreement and discussions in the future.

FN: Many Belarusians, such as yourself, live abroad for political or economic reasons. Can the diaspora play a role? And what do you make of Czech public opinion? Do you see support from Czech public opinion, even though the Czech president has kept silent on the use of violence against protesters in Belarus? Especially considering that riot police in Minsk have used Czech-made weapons?

MŠ: The diaspora does its best to help the people of Belarus. Some of us, myself included, feel quite ashamed that we can't be there in person. That makes us all the more committed to trying to help from abroad by appealing to the international community. Lukashenka has said that Belarusians living abroad are controlled by “puppet-masters”. But it is actually the other way round: in the last weeks and months, all of us, emigrants, have entirely changed our lives in response to what is going on in Belarus. It is the Belarusians in Belarus who are the masters of the situation, and we, the diaspora, are just their puppets. And I’m happy to be such a puppet. I was waiting for 20 years for this to happen, and I did everything I could, including through my literary work, to make it possible. So, I am a very happy puppet right now.

Yes, it is a pity, that some people abroad don’t understand the situation and even support Mr. Lukashenka. For me, this Mr. stands for “murderer,” not “mister”. But what can we do about it? There are few important players in the world today, and I’m glad that the European Union is one of them. It may not be the strongest player, but it is strong enough to make its voice heard. There’s no time to pay attention to the voices of “useful idiots” such as xenophobes, supporters of Russian President Vladimir Putin, conspiracy theorists and so on. Their time was Lukashenka’s time, and it will be over sooner than they think.