Belarus in turmoil: The view from neighbouring Lithuania

Belarusians' activism has surprised even their familiar neighbours in Lithuania 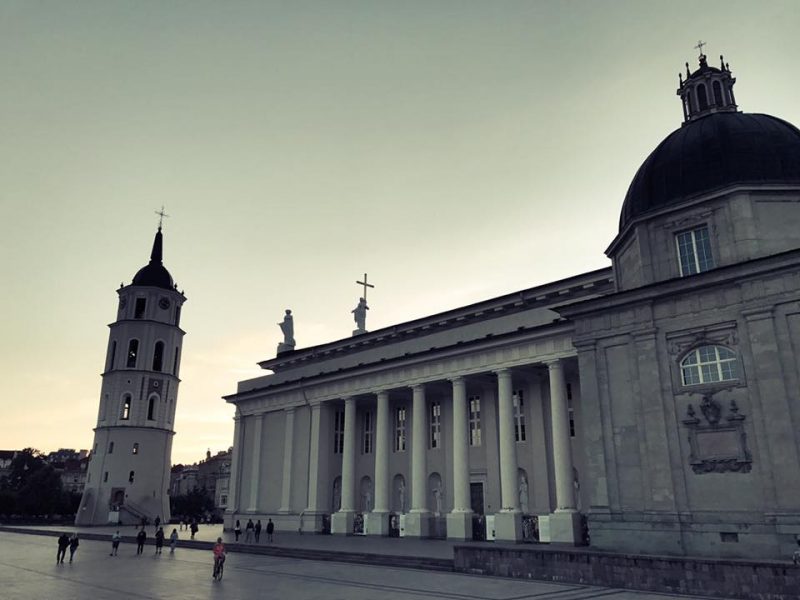 Vilnius’ Cathedral Square, one of the most prominent landmarks of the capital of Lithuania. Photo by Filip Noubel, used with permission.

Belarus and Lithuania share more than just a 600-km long border in the north of Central Europe. Although both countries have gone in very different ways since the collapse of the Soviet Union — Lithuania may be a NATO and EU member and Belarus part of the Russian-led CSTO military alliance — much in their common history unites them. While Belarusians are a small minority in Lithuania, representing less than two percent of the population, this minority plays an important role in Belarusian national historical narratives; from the 14th to the 17th century, Belarus and Lithuania were part of the same entity, the Grand Duchy of Lithuania, and many key Belarusian intellectuals lived, worked, and studied in Vilnius, its capital.

Today the two neighbours share in the aftermath of the August 9 presidential elections in Belarus, which has seen Belarusians take to the streets in mass protests against an attempt by longtime President Alyaksandr Lukashenka to secure a sixth consecutive term in office. Lukashenka came to power in 1994, and over his long rule more than a handful of Belarusian opposition activists have moved to Lithuania. Several Belarusian civil society organisations can be found in the Lithuanian capital Vilnius as well as the European Humanities University, which the Belarusian government forced out of the country in 2004.

Lithuania remains a likely destination for opposition supporters if the political situation in Belarus deteriorates further. They would join opposition candidate Sviatlana Tsikhanouskaya, who fled to Lithuania on August 11 after receiving threats from the Belarusian authorities. In exile, she continues to call upon Belarus to hold free and fair elections and announces her readiness to lead a transitional government.

For its part, the Lithuanian government has voiced strong support for the opposition protesters. For example, on August 12 the country opened its borders, which were shut due to the COVID-19 pandemic, to Belarusian citizens. Then on August 18, the Lithuanian parliament voted overwhelmingly in support of sanctions against Belarus, stressing that the results of the presidential election must not be recognised.

What does the Lithuanian government seek to achieve with these moves? And what do Lithuanians make of the turmoil next door? GlobalVoices spoke to Lithuanian activists, politicians, and civil society figures to find out more.

Despite this familiarity, Lithuanians were taken by surprise when Belarusians responded with such anger to the announcement of the election results, particularly their readiness to take to the streets in the face of incredible state violence and to go on strike.

Lithuania's former prime minister and current member of the European Parliament for Lithuania Andrius Kubilius told GlobalVoices that he sees a generational dynamic at work in these protests:

What triggered this unexpected reaction is a systemic change, the end of what I call the totalitarian regime syndrome of former Soviet states. After 26 years in power, Lukashenka could not provide permanent growth of social conditions. During the last ten years, it actually went into the opposite direction in Belarus. It is also a generational change, Lukashenka always tried to convince people how bad it was before he took power in 1994, but young people did not witness that “before”. They travel and see different living conditions for themselves. Belarusian society has changed dramatically, but Lukashenka hasn't, and that became unacceptable.

From Belarusian experts, we hear that the final straw was the pandemic, during which Lukashenka seriously explained to his people that “one can simply cure and prevent COVID-19 with a visit to the sauna and vodka”. But people took it on themselves to help patients and doctors; they understood they can do quite a lot on their own, and this movement [of social activism] laid the groundwork for the election campaigns and protests.

Given the proximity of Belarus, large parts of the Lithuanian population have shown great empathy, inspired by female Belarusian protesters who came onto the streets wearing white dresses and holding flowers in peaceful daytime demonstrations. Andrius Tapinas, a social activist and founder of internet TV channel Laisvės TV [Liberty TV] explained his own initiative, in which Lithuanians will channel their own struggle for independence into a statement of solidarity with Belarus:

On August 23, I am organising a human chain of people from Lithuania to Belarus. We call it The Freedom Way to Belarus; it is a copy of the Baltic Way of 1989 which has an amazingly deep symbolic value for us. We are going to build a living chain of people from Cathedral Square in central Vilnius, the starting point of original Baltic Way, all the way to the Belarusian border. We reckon it will take 25,000 people to achieve, but we have already registered interest from many more than that, so I expect a double chain of 45-50,000 people. We hope that the Belarusian people will extend the chain from the border into their country, all the way to Minsk. However after Lukashenka promised that he will break the chain by any means necessary, as of today it is unclear whether Belarusians will join.

Vilija Navickaite, a pro-democracy activist and a creative learning practitioner, says that she is eager to take part in Tapinas’ living chain to the Belarusian border. She explained her motivations for supporting the protesters in Belarus:

In my bubble almost everyone has changed their photos in FB with white-red-white Belarusian flags in support for our neighbours and I know people that are closely following the events in Belarus. All this might be a bit similar to 2014 when Lithuanians felt so close to Ukrainians… We were part of the same country with Belarusians for a long time and have similar words in our languages, very similar customs, and the same heroes from the period of the Grand Duchy of Lithuania. It seems that for a while, Belarusians were a bit like our forgotten brothers and sisters. I am happy that's changing.

However, some Lithuanians have markedly frostier attitudes towards their southern neighbour. Lukashenka has pushed for the final construction phase of a nuclear power plant at Astravets, located not too far away from the suburbs of the Lithuanian capital. It is a sore point; Lithuanians remember the April 1986 nuclear catastrophe at Chernobyl all too well. Kubilius shares these same concerns:

Lithuania has passed into law a ban on buying energy from Astravets, which was built initially to sell energy to the Baltics and Eastern Europe. People voted in a referendum in Lithuania against a Japanese-based technology plan after Fukushima to replace our own former Soviet nuclear plant in Ignalina. It is hard to predict the view of the new Belarusian government, but there is also a lot of opposition within Belarus to Astravets, so we might have better opportunities in the future for Lithuania.

Many Lithuanians also looking warily towards Moscow, which is bound to play a key role in the ongoing political crisis. Foreign Minister Linas Linkevičius went as far as to say that Vilnius does not discount an intervention by Russian troops in Belarus, which the government fears. According to Kubilius:

For Putin, Belarus is a real trap: he cannot support the revolution as it could serve as an example to Khabarovsk [a city in Eastern Russia hosting anti-government demonstrations] from Moscow, but if he associates too much with Lukashenka, he will repeat the same errors as in Ukraine, with [former President Viktor] Yanukovich, ousted in 2014. In the end Putin united all Ukraine against Russia. So he would be more happy to remove Lukashenka to avoid strong emotions that could inflame people in Russia, instead opting to install a new leader who is less against the Kremlin. If there are new elections in Belarus, he could get his way. The only hope today lies with the European Union's response: in the European Parliament we have now great support through Euronext to launch an investigation into what happened in Belarus. The biggest challenge to a new democratic government will be the economic situation: just as the EU provided help to Ukraine after the Euromaidan protests, about 14 billion Euros, so should we now provide 3.5 to 4 billion Euros for Belarus, whose population is about four times smaller than that of Ukraine.

That approach is shared by other EU member states bordering Belarus. On August 14, Poland's Prime Minister Mateusz Morawiecki announced a five point plan to help Belarusians, including support for independent media and civil society initiatives and support for political emigres. Some 11.4 million Euros have been allotted to these goals.

Poland has a long history of political support for its immediate neighbours to the East, which was once articulated as a diplomatic strategy known as the Giedroyc Doctrine. However, in recent years critics of the country's ruling right-wing populist Law and Justice (PiS) party argue that the government's attacks on political pluralism and the rule of law at home undermine Poland's credibility in promoting transparency and good governance abroad — including to Belarus. For example, an op-ed published in the major liberal newspaper Gazeta Wyborcza on August 13 argued that Poland's role in that regard had been taken over by Lithuania.

Jörg Forbrig, Director for Central and Eastern Europe at the German Marshall Fund of the United States, has directed a programme in support of civil society in Belarus for the last 15 years. He stressed that it did not necessarily make sense to contrast EU states’ perceived levels of commitment to Belarus in this manner, given that the effort towards reform is an all-European one. However, he praised Lithuania's outsized role in engaging with Belarusian civil society, stating that this gave Vilnius extra credibility with other EU states on the issue:

Lithuania is not [merely] fully in line with EU policy, it even spearheaded quite a lot of the direct support for Belarusian democrats. It hosts a free Belarusian university, numerous NGOs working on democratic change in Belarus, and has now proposed, together with others, a dialogue to resolve the current situation in Belarus. In short, Lithuania has been just as committed, and often even more so, to a democratic and free Belarus [as any other EU member state].

However the situation in Belarus develops, it is likely that Vilnius will be the first port of call for many of its young opposition activists — either as representatives of a new order or as exiles from another fateful attempt against the old.