After recounts revealed the same result, Trinidad & Tobago's government is finally sworn in 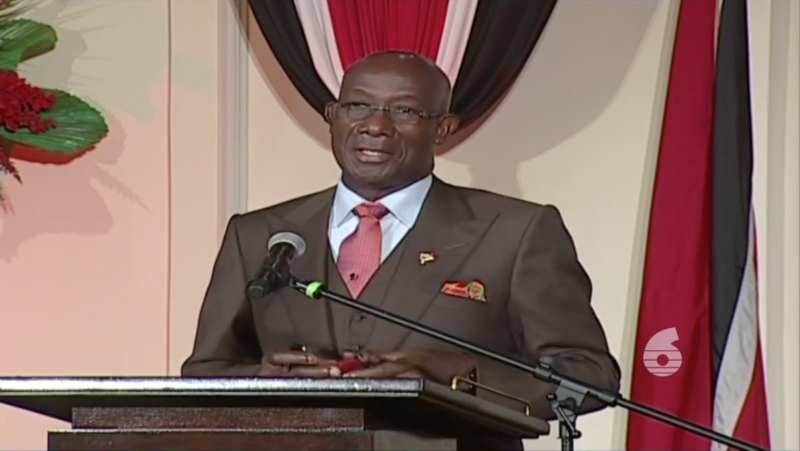 Trinidad and Tobago Prime Minister Keith Rowley addresses the gathering at President's House in Port of Spain, after the swearing in of his new Cabinet on August 19, 2020. Screenshot taken from the CCN TV6 livestream of the swearing-in ceremony.

Nine days after Trinidad and Tobago's general election was held on August 10, the country's government has finally been sworn in.

After the country's Elections and Boundaries Commission (EBC) released its preliminary results showing that the incumbent People's National Movement (PNM) had won with 22 parliamentary seats to the opposition United National Congress’ (UNC) 19, the latter, claiming irregularities, demanded a recount in several constituencies.

Leader of the Opposition Kamla Persad-Bissessar's suggested that the absence of international election observers was “probably a plan [for the PNM] to take the election illegally. But in the end, the results of the recount only reinforced the EBC's initial findings.

Losing candidates’ claims that there were suspicious signatures on the ballots, also came to nought, proving the incumbent administration's long-held stance that the checks and balances governing the country's electoral process make it “impossible to rig the Trinidad and Tobago election.”

One of the seats the UNC did win, however, is in contention. At a press conference held on August 18 Dr. Keith Rowley, leader of the PNM, revealed that his party had sought legal advice from two senior counsels, who advised the PNM that the nomination of UNC candidate Barry Padarath, winner of the seat for the constituency of Princes Town, “does not meet the requirements of the law and is wholly invalid.”

The PNM had raised questions over the legitimacy of Padarath's nomination before the election. Rowley said that the party would not pursue the matter any further in court, as litigation was “not free, not cheap and not without risk”, but felt that it was important to bring the matter to national attention.

Rowley noted that the PNM racked up legal fees of TT$23 million (just over US$3.4 million) responding to the UNC's decision to contest the 2015 election results in court, with the EBC spending about TT$14 million (about US$2 million).

Dr. Rowley says he will furnish the EBC with a copy of the legal opinion for it to determine its own position on the matter, and also advise the President.

Padarath, meanwhile, has said that Prime Minister Rowley should either take the issue to court, or “shut up”, a stance that attorney Justin Phelps challenged:

We should be expecting more from our leaders than arguments that say ‘We have a legal right to do it’. We should be asking be them to account for the implications of exercising it, for the benefits which it could bring, for the reasons why they intend to exercise it.

As the recount dragged on, voices from with the UNC party began to clamour for Persad-Bissessar to concede, which she eventually did on August 18. In her concession speech, she said that she would no longer allow herself to be “portrayed as an obstructionist […] an excuse for the government not moving forward.”

She also spoke of the need to “respect each other’s political choices without invoking and inciting race to divide our people”. Both main political parties have uttered racial slurs over the years, but the UNC was heavily criticised for the tone of its campaign advertisements in the run-up to this election, which many felt was offensive to Black people.

Addressing calls from within her own party for her to step down as political leader, Persad-Bissessar said, “Running away is not an option at this point in time,” thereby ending any speculation that she would allow the election defeat to force her hand. The UNC, however, is scheduled to hold internal elections in 2021 to determine the future leadership of the party.

The swearing-in of Prime Minister Rowley and his new Cabinet began at 4:00 p.m. Trinidad and Tobago time (UTC-4) on August 19, at President's House in the capital, Port of Spain.

The opposition is traditionally sworn in at the first sitting of the new parliamentary term. Unless a legal challenge to Padarath's nomination is mounted before then, he will take his oath of office, having been elected by the constituents of Princes Town by a margin of 6,572 votes.