'A big moment for Caribbean people in America' 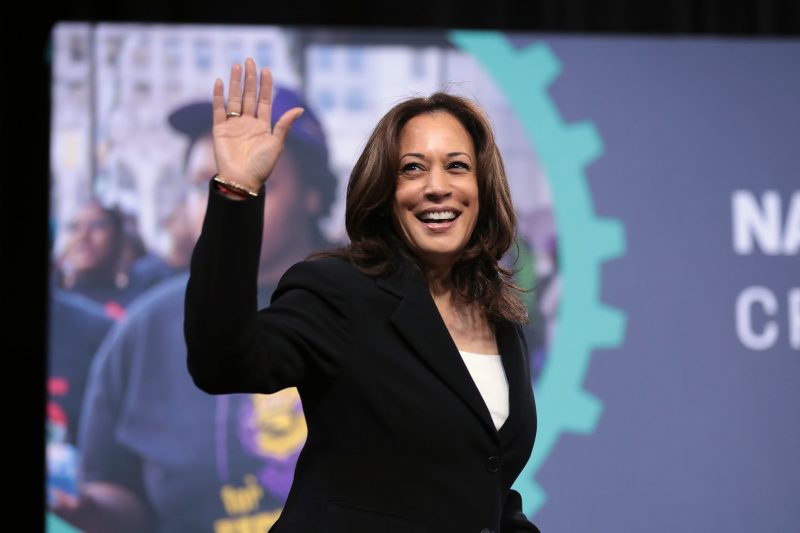 The August 11 announcement that Joe Biden, the Democratic party's candidate for the presidency of the United States, had chosen Senator Kamala Harris as his running mate, has sent waves of celebration throughout the Caribbean.

Harris’ father, an economist and professor emeritus at Stanford University, was born in Jamaica when it was still under British rule — and although she identifies as American, Caribbean netizens still claim her as a descendant of the region. So, too, do Caribbean people of Indian descent, as Harris’ mother, a breast cancer scientist, was born in Madras, India.

From Trinidad and Tobago, writer Ira Mathur, herself of Indian descent, felt that the choice allowed “so many of us [to] see ourselves represented.” She wrote on Facebook:

From Madras and Jamaica with love to America […] from the West Indies to South Asia we couldn’t feel prouder or have more hope for a Trump shattered America.

In a piece for CNN, writer Fredreka Schouten contemplated what the move meant for “islanders” like herself:

I, too, am from the Caribbean […] but descended from people who came from all over what the late Barbadian poet Kamau Brathwaite once called ‘a whole underground continent of thought and feeling and history.’

We carry the archipelago within us, looking and listening, always, for bits of what we left behind […] the habit — a preoccupation, really — with detecting the Caribbean heritage in the people around us.

To the nation, Shirley Chisholm represents the first Black woman elected to Congress and the first to pursue a major-party nomination for the presidency. To me, she's also the daughter of a seamstress from Barbados and a factory worker who came from Guyana. Colin Powell, the first African American to serve as Secretary of State? His parents hailed from Jamaica. Former Attorney General Eric Holder, Barbados roots. […]

Harris, who made a run last year for the Democratic nomination, has navigated public life as a Black woman in America.

That's not to say she doesn't embrace all of who she is.

Whether or not the Democrats emerge triumphant come November, Harris has already made history by becoming the first Black and South Asian American woman candidate for a well established political party.

Many social media users suspected Harris would be Biden's vice-presidential pick, and although most were pleased with the choice, they also understood that it wasn't a straightforward one.

She has the experience and she has the look and she has the energy that [Biden] doesn’t have but she also has a lot of baggage when it comes to black and brown men and the criminal justice system. But they must have worked out their strategy and messaging moving forward. She also represents ‘law and order’ and someone who was ‘tough on crime’ and ‘incarcerated a lot of black and brown men’ and they may be seeing that as a good counterbalance for the Trump campaign. She probably polled well among non people of color. She also has a white husband. So the aesthetic works politically. She’s also a very intelligent woman, articulate, and very savvy and will make a good VP. But she’s also half Jamaican so a big moment for Caribbean people in America.

She summarised her thoughts by saying Harris is “great for diversity,” adding:

She is also the daughter of immigrants and represents the promise of America pre-Trump’s attack on immigration. She ticks a lot of boxes.

I completely underestimated the enthusiasm & emotion Kamala’s selection would inspire… how much it would mean to so many. The usual corners of grumbling… but heart full from seeing how happy, proud, energised this is making people. ❤️🙏🏽

Jamaican social media users also found Harris to be a unifying force, and a firm vote of confidence came from Wayne A. I. Frederick, the Trinidad-born president of Howard University, Harris’ alma mater. Posting a photograph of himself and Harris at a graduation ceremony, Frederick said on Facebook:

Today is an extraordinary moment in the history of America and of Howard University. Senator Kamala Harris’ selection as the Democratic vice presidential candidate represents a milestone opportunity for our democracy to acknowledge the leadership Black women have always exhibited, but has too often been ignored. […] As Senator Harris embarks upon this new chapter in her life, and in our country’s history, she is poised to break two glass ceilings in our society with one fell swoop of her Howard hammer!

Harris’ unique experience as a multiethnic child of immigrant parents who were very involved in the activist movements of the 1960s — she was part of the second class of students to be desegregated through busing — undoubtedly helped shape her identity and worldview. In her announcement post on Facebook, she said:

My mom and dad, like so many other immigrants, came to this country for an education. My mother from India and my dad from Jamaica. And the Civil Rights movement of the 1960s brought them together. Some of my earliest memories are from that time: My parents being attacked by police with hoses, fleeing for safety, with me strapped tightly in my stroller.

That spirit of activism is why my mother, Shyamala, would always tell my sister and me, ‘Don’t just sit around and complain about things. Do something.’

That’s why I became a District Attorney and fought to fix a broken system from within. Why I served as California’s Attorney General. Why I’m proud to represent my state as a U.S. Senator. And it’s why, today, I’m humbled to be joining Joe Biden in the battle to defeat Donald Trump and build a country that lives up to our values of truth, equality, and justice.

Not everyone bought into her explanation. One Twitter user suggested that Harris once used her Jamaican heritage “to uphold an anti-Jamaican stereotype for unaccumulated relatability a broader white audience”. He is referring to a radio interview in which Harris joked about smoking marijuana, after which her father publicly distanced himself from her statement.

Harris’ record of incarcerating high numbers of people of colour is also proving problematic for some, and while there have been opinion pieces that declare the Biden/Harris combo as “disastrous,” some have also deemed it “wise.”

Former Jamaican prime minister P.J. Patterson, a classmate of Harris’ father, noted the ways in which she has grown:

She has been incisive, she goes to the heart of the issue that has to be resolved, particularly at this time when the US itself is going through severe challenges — including, but not confined to, matters pertaining to race. It is good to have someone on the ticket who can look at that and who has ethnic origins.

As the writer Schouten attested:

Who knows what will happen in the months ahead. But for the islanders keeping score — always reconstructing that continent of islands, if only in our minds — Harris will remain the first daughter of the West Indies on a major-party presidential ticket.