Pious, assertive, and ‘mother of all Bolivians': The political narrative of President Jeanine Áñez 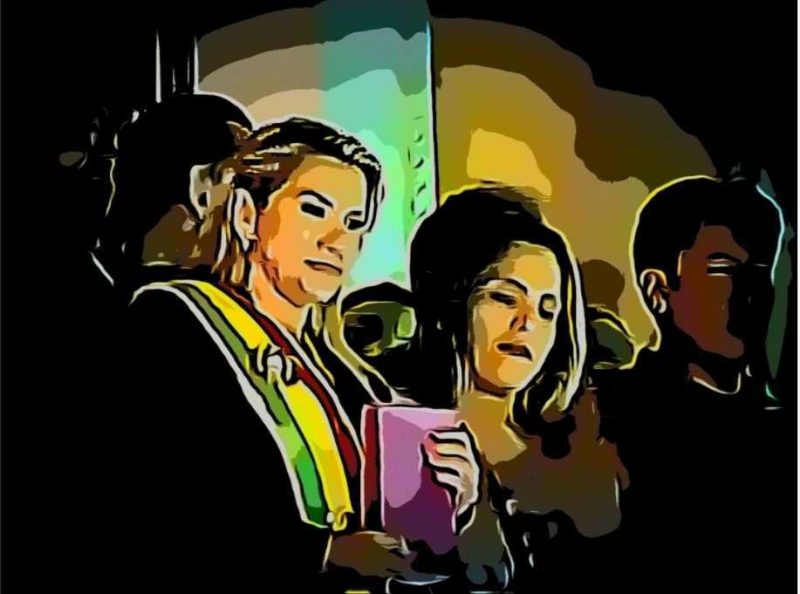 Throughout her campaign and current presidency, President Jeanine Áñez has created an image of herself as a pious Christian, a mother, and an assertive authority in Bolivia.

Despite leading a constitutionally secular country, Áñez has built her Christian image through political practice and religious speeches, earning her comparisons to President Trump and President Bolsonaro.

In an April 15 Instagram photo with the caption, “Flight of blessings. God bless La Paz”, Añez can be seen waving to one of the four helicopter flights made by the Bolivian Air Force to bless the cities of Cochabamba, Tarija, La Paz, El Alto and Montero.  Each flight lasted about an hour with passengers that included priests, evangelical pastors and legislators who brought along holy water and religious statues.

The flight over Tarija reportedly cost the state 11,500 USD in addition to the, at least, 9,000 USD for flights over the other cities. The amount is equivalent to five and a half years’ income for someone on minimum wage, which is currently 307 USD.

Blessings on the ground were also organized. In La Paz, the police paraded their patron saint, the Virgin of Copacabana, trying to lift people's spirits at the beginning of the quarantine. In Santa Cruz, evangelical leaders played the shofar, a Jewish instrument, and drove around the city in twenty vehicles for five hours on the “day of prayer and anointing” organized by the Ministry of Defense and the House of Prayer Church. One of this church's ministers is Áñez's brother, Juan Carlos Añez, who is also a candidate for city representative in Santa Cruz.

People have reacted strongly to this situation:

Facebook post:
“What are they spraying?”
“It’s holy water”
“Does it at least have chlorine in it?”

Captions: Chlorine, cheaper than alcohol, has become popular as a key ingredient for disinfecting surfaces and people during the pandemic.

In addition, President Áñez twice called for people to fast and pray during the COVID-19 quarantine. The calls were rejected in graffiti messages, Twitter, and NGO communications. “It is offensive and humiliating when there are people dying of hunger,” writer Paola Senseve told the newspaper El Deber. Meanwhile, there was a murder-suicide of a girl whose family had not eaten for two days. Her case is one among the projected 453,000 Bolivians who will be driven into extreme poverty this year, as predicted by the Economic Commission for Latin America and the Caribbean (ECLAC).

The phrase “God bless Bolivia” is recurrent in her speeches, as it is in her official government plan. Áñez has also been known to ask her ministers to pray. In her first moments as president, she carried a Bible and said: “The Bible is returning to the Palace”.

When asked by the BBC about her faith as contrasted with Bolivia's secularism, Áñez said that secularism was imposed by former President Evo Morales’ party on the constitution and that “Morales is an atheist”.

Journalist Javier Badani analyzed Añez's positions on Facebook: “Religious views are protected by the constitution. What is wrong is to preach personal beliefs while using the state's public resources, prioritizing your beliefs over others. Áñez and Morales have breached basic regulations. It is just as inappropriate that the cross and the Bible “return” to the Palace, as it is that ch'alle and k'oa [Andean rituals] are performed in this state space. It is not correct to seek political gain by instrumentalizing beliefs so deeply rooted in our country.” In his time, Morales was also questioned for instrumentalizing Andean religious rites.

Facebook Post's comment: The political powers and their narrow interests are killing us. Neither Evo nor Medioevo! Peace and justice!

The meme compares Evo Morales to the character nicknamed “The Mad King” from Game of Thrones, as he preferred to destroy his kingdom rather than leave the throne; and compares Jeanine Añez to the medieval Christian military order of the Knights Templar.

In Bolivia, 88.7 percent of the population identifies as Christian, and there is a syncretism of indigenous and Christian elements as a result of colonization. The country has declared itself secular since 2009, but even so, the state budgeted 1.7 million dollars for the Pope's visit in 2015. The church was also one of the mediators during the 2019 electoral crisis, and the police and military have their own Catholic statues of Mary, those of Copacabana and Carmen.

Religion is also a part of half of the presidential candidates’ campaigns. While the use of religious symbols in campaigns is prohibited, it is not a crime. “Religion can be a key factor in attracting voters. This was shown in the last election by the votes gained by an unknown evangelical pastor. Áñez knows how to use this to her advantage. The conflict occurs when her religiosity interferes with public administration, creates costs for the state, and uses public goods, which is to be condemned from all perspectives,” journalist María Silvia Trigo told Global Voices by email.

Along with religious references, “assertiveness” is another term frequently used in Áñez's speeches. She tries to show herself to be strong, determined and intolerant of corruption, even though this projected image does not match the real actions of her government, Trigo said.

She also emphasizes the fact that she is a mother. “I ask you as a mother” is one of her most repeated phrases. “Proud mother” of her children is part of Áñez’ description on Twitter and Facebook. Áñez dressed up as “Mrs. Santa Claus” to give presents to children at the Government Palace. Her presidential campaign clip begins with her saying, “We had to put the house in order” and shows her leading the management of a home with a group of people. During the quarantine, Áñez's daughter, Carolina Ribera, claimed: “My mother is the mother of all Bolivians”.

Rejecting this, Danitza Luna, a member of the feminist group Mujeres Creando, responded: “I don't accept you Jeanine Añez as my mother” and made a caricature of Añez as the Virgin Mary. The angel has the face of right-wing Minister of Government Arturo Murillo, and the cross on the crown is a symbol of Santa Cruz, the region where the 2019 protests began. The rest of the crown shows the constant threats of prison as a part of her rule, Luna said. Her veil has the U.S. flag and military camouflage, which allegedly supported her takeover. Her halo is made of weapons and at her feet are the police and military.