His two sons, who are not in the media business, were also arrested 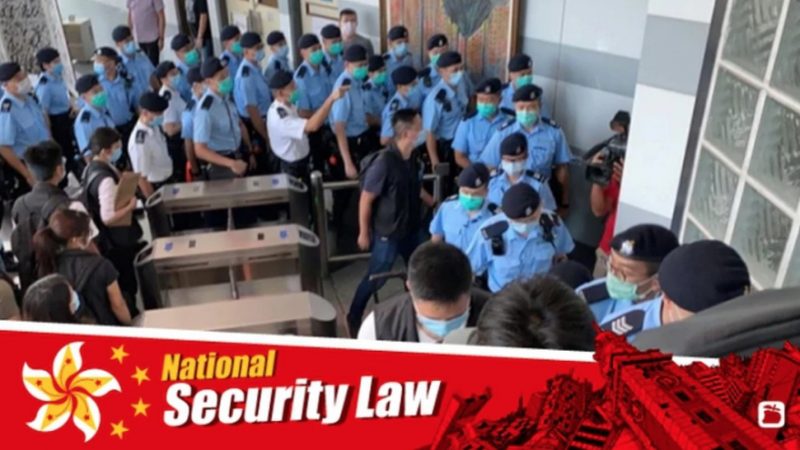 Hong Kong media tycoon Jimmy Lai, a prominent supporter of the city's pro-democracy protests, was arrested in the early morning of August 10 for “colluding with foreign forces,” which is a violation of the new national security law.

Lai is the founder of Next Digital, which owns Apple Daily News and Next Magazine. His two sons, who are not in the media business, and four other top members of his news corporation were also arrested under the draconian law. His personal assistant, Mark Simon, is currently aboard is wanted by the Hong Kong police.

Upon the the arrest, about two hundred police officers raided the office building of the two news outlets in Tseung Kwan O.

Images from inside @appledaily_hk‘s building. Yes, this is #HongKong. pic.twitter.com/lgPyOoiLhs

The incident has drawn the attention of international media and NGOs. Deputy Director of Human Rights Watch Phil Robertson reacted on Twitter:

Steven Butler, the Asia program coordinator of the Committee to Protect Journalists, said in a statement:

The arrest of media tycoon Jimmy Lai bears out the worst fears that Hong Kong’s National Security Law would be used to suppress critical pro-democracy opinion and restrict press freedom…Jimmy Lai should be released at once and any charges dropped.

During the raid, the police sealed off Apple Daily's building and barred journalists from other news organizations from entering:

#HongKong police barred most reporters from going near the @appledaily_hk building, including public broadcaster and govt dept RTHK. They said only local, large scale media which “didn’t obstruct police operation before” are invited. #Pressfreedom pic.twitter.com/SSAB8M51aJ

Apple Daily’s reporters live-streamed the police raid from inside the office. The video showed Jimmy Lai and executive director of Next Media Cheung Kim-hung being handcuffed and escorted back to the building during the search.

Jimmy Lai is now handcuffed from behind the back & is being escorted back to the Apple Daily building. Reporters estimate over 50 officers were part of the escort.

Police have still failed to point out which #NationalSecurityLaw regulation was used for the search. pic.twitter.com/zev6kC8nVJ

An internal message circulating among Apple Daily’s staff stated that the search warrant did not include reporting materials, but according to a police press briefing, officials went through the newsroom's desks and have taken away 25 boxes of evidence after a four-hour search.

When attempting to monitor the police operation, the paper’s chief editor Law Wai-kwong was threatened:

Chief editor Law Wai-kwong of @appledaily_hk got heckled and pushed away by a group of police officers. One officer in white shirt shouted at Law while pointing finger at his face that if Law refused to stay away after warnings, he could be arrested. pic.twitter.com/O7Y2HJ6YKP

While people in Hong Kong had anticipated that freedom of speech would shrink under the national security law, the arrest of Jimmy Lai’s two sons has sent shockwaves through the city. A Twitter user posted photos of police searching Lai’s second son Lai Yui Yan’s restaurant:

#HkngKongPolice searched restaurant, which owned by Jimmy Lai's son. It's all about suppression of HK freedom.#StandWithHongKong pic.twitter.com/eDgCsnkmKO

Although it was expected, the arrest of Jimmy Lai was still very outrageous because his two sons were also arrested, which was obviously an attempt by the authorities to destroy Lai's will through family ties.

I call on the international community to take immediate action ！

While mass mobilization has become extremely difficult under the national security law and the COVID-19 lockdown, some Hongkongers have found ways to express their support to Apple Daily News by buying stocks of Next Digital.

Hong Kong people bought its shares to show support to LAI & Apple Daily, and I believe as a whole the Freedom of the Press. pic.twitter.com/ZRtNWY4Muv

At around 3 p.m., the stock price of Next Digital increased 300 percent in relation to the previous day and later leveled back to 187 percent as the market closed.

Jimmy Lai has been a critic of Beijing since the Tiananmen crackdown in 1989, after which he started in the publishing business. He has sponsored major pro-democracy political parties in Hong Kong and, in 2014, joined the front-line activists of the pro-democracy Umbrella Protests.

Lai had already been arrested in February and April 2020 on charges of attending unauthorized assemblies in 2019 and 2020. This time, the charge of “colluding with foreign forces” under the national security law could lead to a maximum penalty of life imprisonment.