Minister accused of rape gets appointed. What does this say about France?

When it comes to rape, impunity remains the rule in France 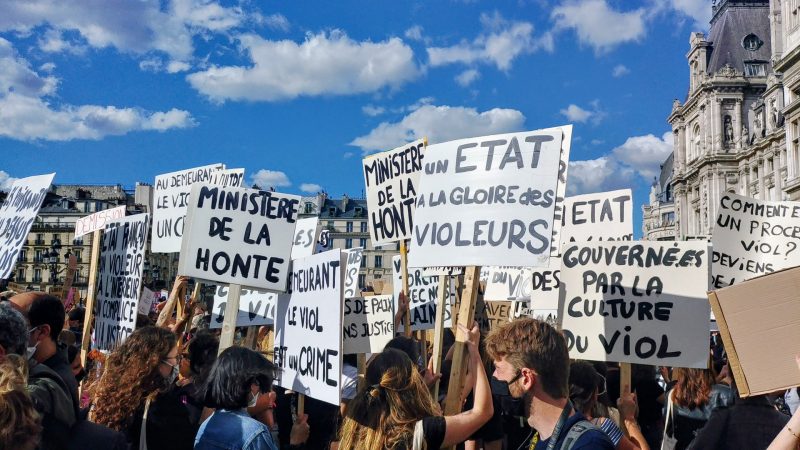 Participants at a rally in Paris on 10 July 2020 express their anger following the 6 July cabinet reshuffle. Writings on a few of their signs: “Ministry of Shame,” “A State that Glorifies Rapists,” and “Governed by Rapist Culture.” Photo @sandfemi, used by generous permission of photographer, who wishes to remain anonymous.

The appointment to the ministry of the interior of a man under investigation for rape and sexual harassment reveals a certain tolerance for violence against women along the fringes of French politics. It also raises broader questions about the normalization of sexist remarks and actions in our society.

On 6 July 2020, as part of a ministerial reshuffle, Prime Minister Jean Castex chose as interior minister Gérald Darmanin, a man being investigated for several charges, including rape.

In 2015, a woman from the city of Tourcoing, where Darmanin was mayor, accused him of “abuse of weakness” for forcing her to have sexual relations in exchange for housing and a job. The inquiry was dismissed in 2018, but it may be taken up again after the association Pourvoir féministe [Feminist provider] filed a court motion on 21 July 2020. In the interim, a second woman accused him of rape, sexual harassment, and fraudulent breach of trust. She filed a complaint three times, and was denied each time. But in June 2020, the Paris Court of Appeal ordered investigations to resume.

The appointment of Darmanin launched multiple feminist protests denouncing a “reshuffle of shame.” The local feminist group, Nous Toutes 35 [All of us 35], complained, “With an alleged rapist as head of police, they’re telling us that a woman’s life is less important than a man’s ability to climb the political ladder.”

The appointment of another minister, a notorious anti feminist attorney, also poses problems. He is Eric Dupond-Moretti, named head of the Justice Department. A critic of the #MeToo movement, Dupond-Moretti had lashed out in particular at new measures against street harassment on the grounds that some women “were sad no one whistled at them anymore.”

In the daily Le Monde, Céline Piques, spokesperson for the Osez le féminisme [Dare to be a feminist]] association, stressed:

These are representatives of the police and justice, two key institutions in the experiences of victims of sexual violence.

In addition to feminist groups, numerous politicians have called for Darmanin to resign, on both the left and the right of the political aisle. Facing them is a rapidly organizing defense.

A defense focused on the presumption of innocence

Since the new interior minister was appointed on 6 July 2020, his defenders have consistently waved the flag of the presumption of innocence. This legal principle states that a person suspected of a crime cannot be considered guilty until he has been found guilty by a court. While Darmanin has been implicated in two lawsuits, he has in fact never been convicted.

When President Macron was asked about the situation during a TV interview on 14 July 2020, he replied that he would “guarantee the presumption of innocence,” which he felt superseded “emotional reactions” and the “democracy of opinion.” In an opinion piece published the next day, 167 majority parliamentarians reminded us that “only our legal institutions can say who is guilty and who is not,” while excoriating “conviction by the populace.”

According to many observers, this line of defence conforming to legal principle avoids the tricky question of politics: What message does this appointment send?

The argument that “He is presumed innocent” is totally deceptive. Yes, that’s true according to the law, but that’s not the question. The question is whether that undermines confidence in our representatives….it is a question of both political ethics and confidence in democracy.

Madeline Da Silva, a member of the Nous toutes [All of us women] organization, asks :

Do you think they would have appointed someone under investigation for another crime, a murder or an assassination? No, this happens only for crimes that involved sexist and sexual violence, like rape…. We are talking about political choices and the messages being sent.

The new prime minister is taking “full responsibility” for this political choice.

A controversy that highlights the profound sexism in politics

Defenders of the new interior minister also rely on dated, sexist motives that appear to be normalized.

When asked about Darmanin, Macron spoke of the “relationship of trust from man to man” that connects them. Many interpreted this statement as an expression of the male solidarity and clannishness that rule in the halls of power. “Could he have chosen a worse defense?” wonders reporter Laure Bretton.

Such solidarity looks suspicious when you consider that several of the deputies who have publicly defended Darmanin have themselves been accused of sexual harassment and assault.

The political fringe also makes use of a well-known tactic in the #MeToo era: victimizing the accused, which tends to make the accuser invisible. According to the president, Darmanin is a man who has been “wounded by these attacks.” An op-ed signed by 200 representatives described him as being “targeted by disparate attack groups.” Darmanin himself says he is the victim of a “man hunt” and denounces “a form of injustice.”

Meanwhile, the plaintiffs watch as their pasts are picked apart and their integrity questioned.

Another revealing misstep by Darmanin was when he admitted to having had “the life of a young man.” A female activist analyzed this remark on Twitter:

The problem is that we have a culture where “the life of a young man” means behaviors of domination and predation over women. To excuse (and thereby validate and maintain) this culture at the highest levels of government is an extremely serious ethical failing. #Darmanin https://t.co/9r7ZXpVjmq

Journalist Christine Ollivier reported the highly problematic comments by an anonymous minister that appear to reveal the breadth of the phenomenon in politics:

Off mic, a minister answered a question from AFP about Darmanin by saying, “If every guy who acted badly with girls can’t have a position of responsibility anymore, we’re going to have a problem.”

Without meaning to, Darmanin’s supporters are highlighting the power mechanisms that contribute to the silence and to the impunity of the aggressors.

Has the #MeToo movement failed in France?

Gérald Darmanin joins a long list of male politicians accused of harassment or sexual assault: Georges Tron (Republican), Denis Baupin (Greens), Jean Lassalle (Center), Gilbert Cuzou and Pierre Joxe (Socialists), Christophe Arend (En Marche!), etc. While some cases are ongoing, no convictions have been handed down at the time of this writing. Sexual harassment is punishable in France by two years of prison, sexual assault by seven years, and rape by a minimum of 15 years.

Nearly three years after the #MeToo movement exploded around the world, France has not had a single major conviction, despite this new outlet for free speech of the victims and the swelling number of testimonies against men in power at #BalanceTonPorc [Squeal on your pig.]

According to the office of the Secretary of State for Equality between Men and Women, only one percent of rapes or attempted rapes led to a conviction in 2018. While some make reference to the French cultural exception, the underlying impunity shows it is time to recognize the systemic sexism and culture of rape permeating our society.