Who are the 6 Hong Kong activists wanted by the police under Beijing's national security law? 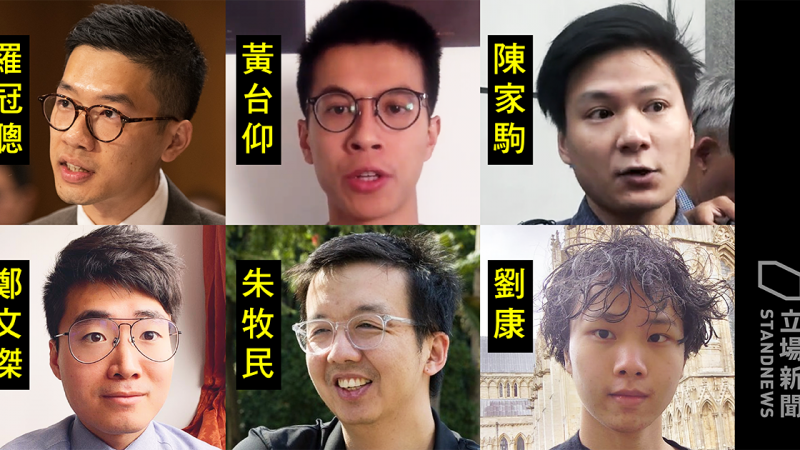 Six pro-democracy activists have been branded fugitives of justice by the Hong Kong Police Force, according to a report by China Central Television (CCTV) aired on July 31. Local authorities refused media request to comment on the case.

Among the activists are Nathan Law, Ray Wong, Honcques Laus, Simon Cheng, Wayne Chan — all Hong Kong citizens living overseas. The sixth activist, Samuel Chu, is a United States citizen and has been living in that country for the past 25 years.

CCTV reported that the six men are wanted for “incitement to secession and collusion with foreign forces,” which would be violations of the newly-enacted national security law.

The arrest order of US citizen Samuel Chu seems to confirm fears that China aims to apply the draconian law to anyone on Earth, including non-Hong Kong citizens residing overseas.

Since the enactment of the new law, the United Kingdom, the United States, New Zealand, and some European countries including France and Germany have suspended their extradition treaties with Hong Kong.

Why are the six men wanted by Beijing? Below is a brief summary of the activists’ background and their reactions to the “fugitive” status.

The 42-year-old pastor was born in Hong Kong, but since 1995 has been a citizen of the United States, where he also lives. He has been involved in anti-poverty activism in his country of residence, for example, advocating for schools to provide free meals to students and campaigning against “lunch shaming.”

He is a son of Reverend Chu Yiu-ming, who was a prominent figure in Hong Kong's 2014 Umbrella Protests.

On Twitter, Chu mocked the accusations levied against him:

Today, I woke up to media reports that I am a wanted fugitive.

Except I am an American citizen & have been for 25 years. pic.twitter.com/rppP14kLnU

Born in mainland China, the 27-year-old activist left Hong Kong to the United Kingdom shortly before July 1, 2020, when the national security law was enacted.

Besides being one of the student leaders of the 2014 Umbrella Protests, Law is also the founding chairperson of Demosisto, a now-disbanded political party led by student activists, including Joshua Wong and Agnes Chow.

The party advocated for a referendum to determine Hong Kong's sovereignty post-2047, when the “one country, two systems” principle of the 1997 Sino-British declaration is due to expire.

In 2016, at the age of 23, Law was elected as the youngest-ever member of the Legislative Council, but he was disqualified from holding office after making a protest statement during his oath-taking ceremony.

He now lives in London and has continued to lobby international bodies to safeguard civil liberties and human rights in Hong Kong.

After seeing the CCTV news, he tweeted that all of his decisions have been made out of the love for Hong Kong, and that he is willing to pay “the price of displacement”. He added that, in order to protect his family from political harassment, he would sever relationships with them:

8. At the same time, I hereby reiterate: My advocacy work overseas is conducted in my own personal capacity, without any collaboration with others. Since leaving Hong Kong, I have also stopped contacting members of my family. From now on I’ll sever my relationship with them.

Wong founded the localist political group Hong Kong Indigenous soon after the Umbrella Protests in 2014, which favored more radical action in contrast with the city's mainstream pro-democracy movements. He was arrested in February 2016 on charges of “inciting a riot” in Mongkok district during the Lunar New Year.

Wong jumped bail and fled to Europe in November 2017. Germany granted him refugee status for political persecution in May 2018.

Despite Beijing's claims that the national security law will not be applied retroactively, the inclusion of Ray Wong in the wanted list suggests otherwise.

So the only reason why I was sought for “incitement to secession and collusion with foreign forces ” must be based on my activities before the NSL is in force. Today,#HKGov unveils the fact that they'd use the law retrospectively.

The 19-year-old Vietnamese-Hongkonger is the youngest of the six activists.

He was arrested in April 2018 after a body search near the Legislative Council found he was carrying a toy gun. The activist was sentenced to 18-month probation by a District Court, but he appealed to a High Court and won.

In June 2019, he established the Hongkonger Utilitarian Party, a pro-independence group.

Like other activists, he fled to the UK shortly before the security law was enacted, and now seeks political asylum in that country.

In response to his “fugitive” status, he wrote on Facebook:

As I can enjoy freedom of speech in the UK, I will dare to express my political opinion freely, and continue to request the international community to impose sanctions against the Hong Kong government and the Chinese government, including sanctions on Carrie Lam, PK Tang and “Winnie the Pooh”.

The 30-year-old activist is the convener of the political group Hong Kong Independence Union.

Chan joined the Civic Party in 2013 and participated in the Umbrella Protests in 2014. He left the party in 2015 and took a political turn towards advocating for Hong Kong's independence.

He was arrested, and then released on bail, for participating in protests in June 2019 that were deemed illegal by the authorities. The activist jumped bail and fled Hong Kong to the UK in June 2020.

Chan has kept a low-profile since settling in the UK. He has told Hong Kong Free Press that was not sure why he was included in the list but pondered that the fact that he posted the Hong Kong independence flag on Facebook on July 1 might have drawn the authorities’ attention.

In the same interview, he expressed concern over the security of fellow activists in Hong Kong and stressed that he is not afraid of the wanted order:

I would not change my political view after leaving, especially when those in Hong Kong can no longer speak out as they wish.

Cheng was a former trade and investment officer at the British Consulate-General in Hong Kong. He was arrested and detained by mainland Chinese authorities during a trip to Shenzhen in August 2019 and was forced to make a video confession for “soliciting prostitutes” in exchange for his release.

In November 2019, he said Chinese agents tortured him and forced him to confess that he was a British spy who instigated the anti-extradition protests in Hong Kong.

He traveled to the UK in December 2019 and was granted refugee status by the UK on June 26, 2020. Together with other exiled activists, Cheng has been helping Hongkongers to seek asylum abroad.

As the Hong Kong government had disqualified pro-democracy candidates en mass from running to the Legislative Council election, Cheng's group of exiled activists are drawing a plan to establish an unofficial parliament-in-exile.

He made a brief statement on Facebook regarding the wanted order:

Statement: I keep speaking up and acting for the public cause of our people’s interest and freedom, esp. for those who have no power and wealth, now the totalitarian regime criminalises that and frame me up, then I would take that not as a shame but an honour.