In Trinidad & Tobago, the use of Black iconography in Emancipation Day ads backfires

Riding the wave of a social movement? Get it right.

Image of the clenched fist, a symbol of resistance that has come to be most closely associated with the Black Power movement, and now, with Black Lives Matter. Photo by Paul VanDerWerf via Flickr CC BY 2.0.

One of the ripple effects of the Black Lives Matter (BLM) movement has been personal reckoning when it comes to racial bias. After a video of George Floyd's murder at the hands of police officers in Minneapolis, Minnesota, sparked worldwide protests — including in the Caribbean — many have been educating themselves and confronting their privilege and now that BLM has captured widespread attention, companies are also making a point of supporting causes that advocate for racial justice.

On August 1, in Trinidad and Tobago, this desire to be seen as “woke” and in solidarity with the cause took on an interesting tenor as the country marked Emancipation Day, which commemorates the freedom of enslaved Africans in the former British West Indies.

Trinidad and Tobago, like other Caribbean territories, has a history of occupation, colonisation and slavery and in 1985, became the first independent country in the world to declare Emancipation a public holiday.

As is customary, the pages of local newspapers were filled with corporate messages acknowledging the anniversary of the abolition of slavery.

Several advertisements that missed the mark featured the symbol of the clenched fist most often associated with the Black Power movement of the late 1960s and early '70s, and now, with Black Lives Matter.

Stag, a locally brewed beer, posted an image of the fist emerging from one of its labelled bottles with the message, “Open up to freedom in every sip”: 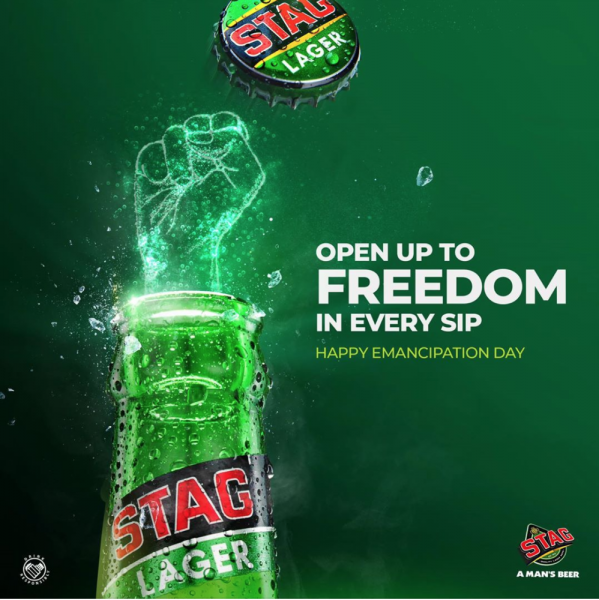 Some commenters expressed their disappointment at the trivialisation of the importance of Emancipation, while others felt those who took offence were being “snowflakes” and “over-sensitive”.

However, the ad that struck the sourest note came from KFC, which posted an image of a drumstick whose shadow cast an image of the fist clenched in resistance. Social media exploded at the audacity of the stereotype, with many users wondering if it was even authentic.

The post (and its accompanying comments) was taken down after the outcry, but several netizens took screenshots:

KFC Trinidad deleted this ad to acknowledge Trinidad and Togabo's August 1 Emancipation Day from its social media after some well-deserved backlash. Another reason to diversify your marketing teams/organizations. It's ok to laugh to express your shock and anger. #KFC pic.twitter.com/6uw9t325OE

There was a time when our ancestors weren't even given a drumstick to eat. They lived on chicken feet and whatever else the slave masters were discarding.

EDIT: Of course it has been removed. Now we await the bs apology and how determined they are to work with bla…ah..blah..blah

The clunkily worded apology, which used the word “recognised” three times, eventually came at 8:03 p.m. Trinidad and Tobago time — but was preceded by another tone-deaf attempt at an ad, this time with a red balloon boasting the face of Colonel Sanders rising above a bunch of inert white balloons: 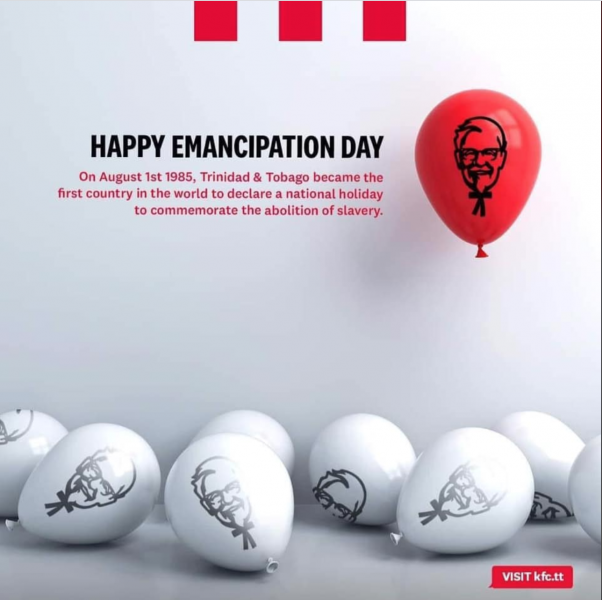 KFC Trinidad and Tobago's second attempt at an Emancipation Day ad. Screenshot taken from the brand's Facebook page before it was taken down.

According to Facebook user Michael Lee Poy, who commented on the Stag ad, it comes down to intent — whether a company truly believes in the cause, or is simply looking to promote its brand and sell more product on the backs of social movements that have captured people's imaginations.

Another glaring miss came from the opposition political party the United National Congress (UNC), which posted an ad that came across much more like “All Lives Matter”: 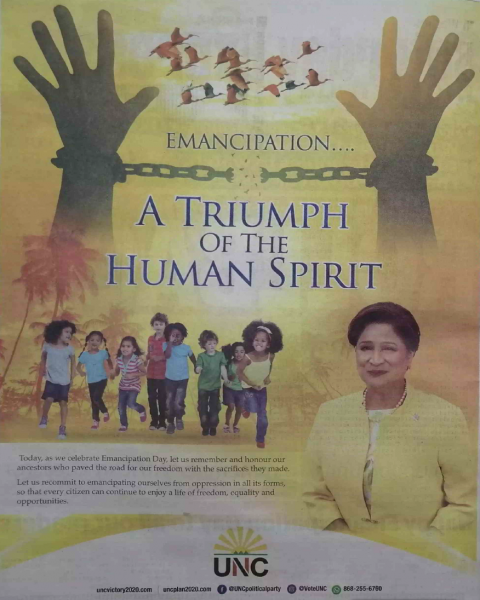 Screenshot of the United National Congress’ Emancipation Day ad, which ran in the Express newspaper on August 1, 2020.

The use of predominantly fair-skinned children and a photo of the party's leader under the image of a pair of hands — which didn't even look Black — breaking free of shackles, succeeded only in taking away Black people's agency and trivialising their suffering 186 years later, on the very anniversary of slavery's abolition.

In the wake of such missteps, a consortium that includes the Emancipation Support Committee, the Kwame Ture Educational Institute, Rhodes Must Fall Caribbean, and the Artists’ Coalition of Trinidad and Tobago, is demanding “discussions about reparative action” with Prestige Holdings Limited, the company that owns the local KFC franchise.

The groups have not yet identified whether they will approach other companies and organisations which also produced offensive ads, but they did issue a statement on the KFC imagery, which they called “racist, derogatory and diminishing of the African Struggle for racial justice particularly in terms of the Black Power Revolution celebrating its 50th anniversary and the contemporary Black Lives Matter movement”:

This ad brings to light greater issues of the way that Africans are represented in media and how careless and flippant many media programmers are with African icons, legacy, and symbols. […]

The battle is to eliminate destructive and debased colonial stereotypes which repeatedly project our people as lazy, savage, evil, criminal, and ignorant. The battle is to ensure that Black dignity, Black heroes, heroism and even super-heroism become more commonplace in modern storytelling.

We cannot allow a major Caribbean corporate player to perpetuate demeaning images of African People at any time—and more so on a day that is sacred to us, when we pay homage to our ancestors whose sacrifice resulted in the freedoms we celebrate on Emancipation Day.

The engagement they hope for includes “a public, corporate, and advertising industry outreach component […] to ensure that such a grievous error in representation is not made again.”

When organisations try to ride the wave of a social movement, they'd better know what they're doing, because consumers can sniff out insincerity. It's why the now infamous ad — in which, by offering a police officer a can of Pepsi, Kendall Jenner diffuses a tense standoff with demonstrators — has been lampooned by Black Lives Matter protestors.

We are still far from free of racism and the kind of thinking that views some human beings as more entitled, more valuable, more intelligent, more worthy, than other human beings based on skin colour, where you live, what work you do, your gender identity, what clothes you wear, and on and on. [Emancipation] is a day to remember that contemporary forms of slavery exist in the world today, that human beings are still being trafficked for profit, right here in our midst, and across the world. Today is very much a day of celebration, a day of remembrance, but also a day of reflection.

There's a difference between taking a stand on pressing social issues, and regarding those issues as nothing more than a marketing opportunity.