At least 24 new media outlets have been created since 2018 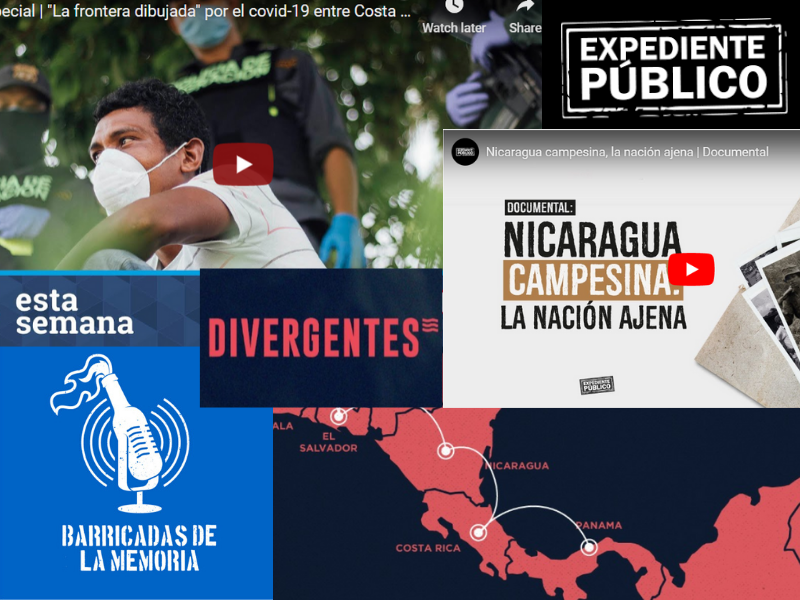 Montage of screenshots and logos from Nicaraguan and Central American media outlets by Global Voices, used with permission.

Press freedom in Nicaragua faces multiple challenges, including political persecution by President Ortega's administration coupled with a lack of access to public information. Despite these hurdles, at least 24 new media outlets have been created since April 2018 according to a report published by Literal Periodismo Ciudadano.

In April 2018, the largest popular mobilizations in the last 30 years were sparked in response to proposed social security reforms. However, following the severe government response, the protesters also began taking to the streets against political repression at the hands of Daniel Ortega government, increasingly seen as authoritarian. The protests from 2018 received a wide level of support, even in cities and sectors that were traditionally in favor of the Sandinista movement led by Ortega.

On May 30, 2018, the day when Nicaragua celebrates national Mother's Day, 18 young protesters were killed and 218 were wounded, according to local press reports. According to the Inter-American Commission on Human Rights, at least 328 Nicaraguans were assassinated during the turmoil in 2018. The political situation after the protests has led to at least 80,000 exiles.

Following the April 2018 protests, there were 1,080 attacks on freedom of expression and the media.

In 2020, Daniel Ortega is still in power and journalists in Nicaragua continue to face police harassment, customs blocks of press supplies as well as physical assault. According to Reporters Without Borders—which, since 2019, has lowered Nicaragua by three ranks in its annual ranking of press freedom—“journalists are often victims of harassment campaigns, arbitrary arrests and death threats.”

Despite these challenges, Nicaraguan journalism has managed to carry on, adapting to the new political, economic and technological circumstances.

Below are multimedia projects developed by new digital media, traditional print newspapers that have adapted to multimedia formats, and initiatives from the survivors of the 2018 protest crackdowns. Despite the ongoing threats to press freedom, Nicaragua's media outlets are using digital media to publicly reflect on the history of state violence and the forces that oppose it.

The Mothers of April Association was founded to bring together the mothers and families of the victims from 2018. The organization created a series of initiatives focused on memory, reparations and justice. One of its projects is the Museum of Memory, a multimedia gallery about the victims of the 2018 state repression, a forensic reconstruction of the May 30 massacre, and a podcast about the memory of the victims. The first episode relives what happened in the city of Masaya during the protests in 2018.

Memory to not forget, memory to resist.

Historical memory of the peasant resistance

The investigative digital media outlet Expediente Público developed a series of reports, timelines, and galleries on the peasant movement's opposition against the government during the 1980s and its history until the end of the “Nicaraguan Revolution” in 1990. The documentary “Nicaragua campesina, la nación ajena” (“Peasant Nicaragua, a Foreign Nation”) is a summary of this story.

Nicaragua is a country with a large rural population whose economy depends on agricultural exports. During the 1980s, with an agro-industrial export policy, the Sandinista government developed programs of agrarian reform and set up companies “owned by the people.” However, in practice, this vision meant land expropriation, forced cooperativism, and cultural imposition from the capital Managua, according to Expediente Publico. This situation generated discontent among the peasants, who not only questioned the government but also mobilized and were part of the armed conflict. At the end of the conflict, 71% of the Contras who stopped fighting were peasants, but they did not receive reparations nor sufficient support to reintegrate socially.

“The Empty Spaces Left by April”

The newly created Central American website Divergentes (which includes multimedia formats and news “from other perspectives”) was launched in May 2020 and recently published three profiles of families affected by state violence in 2018. The profile titled “Los Vacíos Que Dejo Abril” (“The Empty Spaces Left by April”) includes interviews with three families about how they handle mourning, and photo galleries and a special podcast edition about the rooms, furniture and spaces that are no longer occupied by their murdered relatives. There is a multimedia report, and a special edition in podcast.

“Here,” she says, stomping the ground, “Gerald thought to build his room to give privacy to his sisters and me. Occasionally, my dad comes to clean, to remove the leaves, although now it is of little use,” recalls Susana.

A media alliance (including Confidencial, and two Costa Rican media outlets—“La Voz de Guanacaste” [‘Voice of Guanacaste’] and the University of Costa Rica’s “Interferencia” radio network) produced a report about the communities on the border between Nicaragua and Costa Rica. These communities have been affected by economic conditions, difficulty in accessing public services, legal and illegal migration, and response strategies to COVID-19. A special video report was published on the social networks of these media outlets.