Five months after the elections, Guyana swears in new president 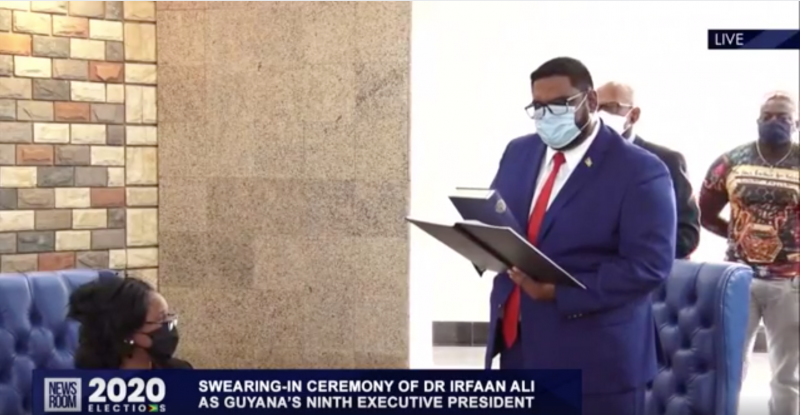 Guyana's new president, Mohamed Irfaan Ali, at his swearing-in ceremony on August 2, 2020. Screenshot from a YouTube video of the event posted by Guyana Uncut.

Five months to the day since Guyana's 2020 general elections took place on March 2, the country has a new president.

On August 2, Guyana Elections Commission (GECOM) Chair Claudette Singh declared Mohamed Irfaan Ali as the country's ninth executive president as she confirmed the results of the election in favour of the opposition People's Progressive Party (PPP).

The incumbent coalition A Partnership for National Unity/Alliance for Change (APNU+AFC) had insisted the votes it received in its stronghold electoral district of Region 4 were tantamount to a win, but the entire process was stymied by the manner in which that region's results were tallied — by spreadsheet, rather than by Statements of Poll, which is the legally sanctioned method.

The impasse induced a drawn-out process involving verifications, injunctions, intervention by the Caribbean Community (CARICOM), a recount and court actions challenging its results, some of which went all the way to the Caribbean Court of Justice, Guyana's highest appellate court.

When, however, the Guyana Court of Appeal unanimously ruled that the recount votes should be used to determine and declare the result of the general elections — and that GECOM's official report must be based on that tally — the end was finally in sight.

Less than two hours after Singh made the official GECOM declaration, President Ali was sworn in at the Arthur Chung Conference Centre in the capital, Georgetown. General Secretary of the PPP and former president Bharrat Jagdeo was sworn in as vice president, and former Guyana Defence Force Chief of Staff Mark Phillips took the oath as prime minister. The new PPP government is expected to announce additional cabinet appointments at a later date.

Stabroek News, well regarded as the country's paper of record, noted that things moved at a dramatically expeditious pace once the declaration had been made, but described the statement made by GECOM's public relations officer, Yolanda Ward, as “terse”:

[The Chief Election Officer] CEO submits report to Chairperson using results of the recount of ballots cast at the General and Regional Elections.

On March 6, Stabroek News had published an editorial accusing GECOM of “working in the interest” of the government and “rigging the 2020 general elections right before our eyes”.

A GECOM communiqué explained that after Chief Election Officer Keith Lowenfield, following the instructions of the appeal court, submitted his report based on the results of the recount of ballots, the commission met on August 2 “to deliberate on the report”.

A statement from the Ministry of the Presidency read:

President David Granger, this morning, received a call from the Chairman of the Elections Commission, Justice (Ret’d) Claudette Singh who invited him to a conversation with Opposition Leader Mr. Bharrat Jagdeo to discuss the way forward.

The President explained that he had no objection to speaking with Mr. Jagdeo but as far as a proposed declaration is concerned, he recognised that the Commission has a legal obligation as a result of the recent ruling of the Court of Appeal, to proceed with a declaration.

President Granger said that notwithstanding that declaration, the APNU+ AFC coalition maintains that the anomalies and irregularities which have been uncovered during the recount process cannot be accepted and will form the grounds for an election petition.

The GECOM statement, however, said that the PPP preferred to opt out of any discussions until GECOM had made its declaration. Once this was done, Bharrat Jagdeo said, the PPP would be “committed to talks on a governance model”.

GECOM reconvened at 2:00 p.m. Guyana time “to deliberate on the [Chief Election Officer’s] report,” and after “careful examination,” the release continued, “Justice Claudette Singh declared Mohamed Irfaan Ali as President of the Co-operative Republic of Guyana.”

The APNU+AFC Coalition respects the lawful consequences of the “declaration” as announced by the Chairman of the Elections Commission. I maintain that the Report ordered by the Court and presented to the Commission contains significant anomalies and irregularities.

The APNU+AFC Coalition cannot endorse a flawed Report and will continue its campaign to ensure that the votes of all Guyanese are accurately recorded, tallied and reported.

The APNU+AFC Coalition will challenge the declared results lawfully, peacefully and purposefully.

That pending challenge, however, doesn't seem to have many people concerned.

Democracy rules in Guyana! Today, Mohamed Irfaan Ali was sworn in as president, reflecting the will of the Guyanese people.

We congratulate President Ali & look forward to working with all to support Guyana’s development for the benefit of all its people. https://t.co/kVSHQ6Dl1l

Mere days before, on July 30, Kozak had tweeted his dissatisfaction with Guyana's lengthy democratic process, leading some to speculate that US pressure may have hastened the APNU+AFC's decision to stand down:

Today we took action to bar additional senior officials responsible for, or complicit in, undermining democracy in Guyana from entering the U.S.

The U.S. will not stand by as the Granger administration continues to defy the will of the Guyanese people. Democracy must prevail.-MK

The U.S. government had already applied sanctions in the form of visa revocation on “individuals responsible and complicit in undermining democracy in Guyana”, and was pressuring its allies to join them.

There was also concern that the political impasse would negatively affect the country's economic future.

Despite estimates that the newly discovered resources at Guyana's Stabroek Block are estimated to be more than eight billion barrels of oil, and a July 30 announcement by Hess Corporation — which is developing the interest in conjunction with ExxonMobil and CNOOC Limited — saying that recent appraisals identified two more high-quality reservoirs, Forbes magazine confirmed that “for oil and gas companies […] looking to do business in Guyana’s offshore, the resolution of this election and a return to government stability is a key factor.”

As Guyana's new president, it will now become Mohamed Irfaan Ali's responsibility to protect the Guyanese people's patrimony and transparently manage those billions of dollars in new oil revenues, which have the potential to transform the country completely.