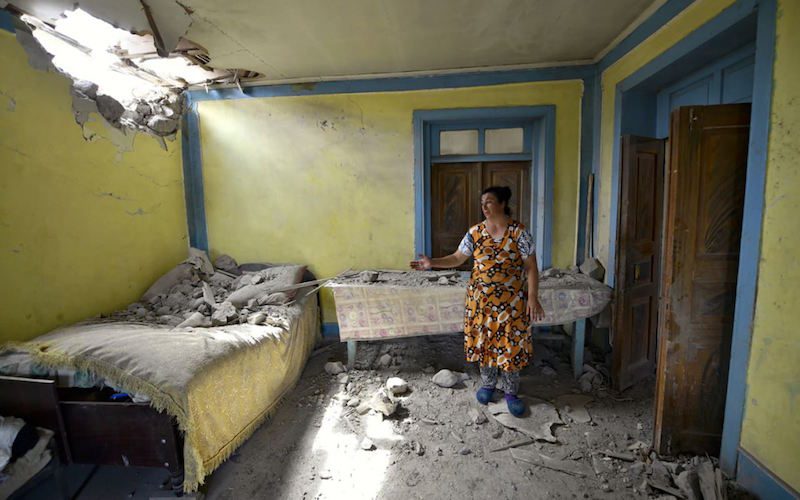 A house in Tovuz District, Azerbaijan damaged by artillery attack from the Armenian Armed Forces on July 14, according to the Azerbaijani side. Photo: Voice of America / Public Domain / Wikimedia Commons. Some rights reserved.

Against the backdrop of a pandemic, armed conflict has broken out once again in the South Caucasus. Unlike previous skirmishes on the frontline between Armenia and Azerbaijan, what started as violent border clashes on July 12 has since turned into the deadliest fighting in years, killing 17. The tension has spilt over into the diaspora: Armenian and Azerbaijani migrants clashed in various cities across the world. In Russia, traders from the two countries have even boycotted each others’ apricots.

What is clear is that the recent escalations represent a massive step back from any prospect for peace.

Peace has seemed even more elusive in recent years. The conflict between Armenia and Azerbaijan over Nagorno Karabakh, a mountainous territory which was an autonomous region in the Soviet era, spans three decades. It continues to be a source of instability, inflamed by constant accusations made by politicians from both sides. It has caused extensive financial loss and hardship to ordinary Armenians and Azerbaijanis alike, who have been displaced from their homes en masse.

According to data by the International Crisis Group (ICG), 239 people have been killed or wounded (including both civilians and military personnel) as a result of the conflict since 2015. These figures do not include the clashes in April 2016 when some 200 were killed. The fighting which broke out last month was the deadliest since the April 2016 confrontation. But a key difference was that while previous clashes have mostly taken place on the “Line of Contact” in Nagorno-Karabakh, the latest occurred on the internationally recognised border between Armenia and Azerbaijan, some distance to the North. It was also the first time in years that two high ranking servicemen were killed: Major General Polad Hashimov and Colonel Ilgar Mirzayev of the Azerbaijani Armed Forces.

On July 14, two days before the fighting finally quieted down, the news of Hashimov and Mirzayev's deaths reached the general public. That day, some 30,000 residents of the Azerbaijani capital of Baku took the streets of the capital to march in support of the country's armed forces and call on President Ilham Aliyev to take a tougher approach to the conflict with Armenia. One group of protesters even stormed the country's parliament building.

Officials in Baku have been critical of international mediators. Earlier in July, President Aliyev said that no negotiations of any substance were taking place and that the video conference calls between the Foreign Ministries of Armenia and Azerbaijan were not important. The country's leadership is frustrated with a lack of progress towards resolving the conflict, particularly around the return of seven adjacent Azerbaijani territories surrounding the Nagorno-Karabakh autonomous region, which are currently under Armenian control.

An International Crisis Group recap of the recent war explains the situation well:

What’s new? Deadly July 2020 clashes between Armenian and Azerbaijani forces left dozens dead, civilians among them, and forced villagers to flee their homes on the Armenia-Azerbaijan state border. Shooting across the trenches along the border is more frequent today than anywhere else on the Nagorno-Karabakh conflict’s front lines.

Why does it matter? Efforts by Baku and Yerevan, including through limited diplomacy, a communication channel set up in 2018 and an agreement between the two sides to safeguard farmers, have largely failed to create conditions that would deter people from leaving border areas. Violence there also risks permanently damaging wider peace efforts.

What should be done? The two sides should use the communication channel to warn each other about planned engineering works or other activities that might be misconstrued and lead to escalation. They should begin talks on limited cooperation to allow farmers to harvest crops, repair water networks and clear mines.

But the scale of clashes between Armenians and Azerbaijanis across the world was also noteworthy. After the first shots were fired, reports of diaspora clashes and fistfights started coming in from abroad. In Russia, where both Armenians and Azerbaijanis have a significant diaspora presence, the weapon of choice turned out to be apricots. In her reporting on the “apricot war,” journalist Liana Aghajanian writes:

The fruit fight began when Azerbaijanis bought pallets of perfectly luscious apricots – Armenia’s largest fruit export and treasured national symbol – and filmed themselves destroying the crops by stomping on them – videos of which were shared across social media networks including TikTok and Twitter.

A market in Moscow then refused entry to an estimated fifty drivers who arrived from Armenia and who normally trade at the market, wrote Aghajanian. The subsequent scenes of physical violence among the two communities that followed suit left many (including the author) wishing that the fighting had only continued with apricots.

EurasiaNet reported that gangs of men wielding clubs started attacking Armenian and Azerbaijani restaurants across Moscow and several other cities in Russia. Clashes were also reported in London, Brussels, and Los Angeles (the latter is home to one of North America's largest Armenian communities.)

As third party mediators and international organisations called for peace and calm, stars like Kim Kardashian did quite the opposite. Somewhere between stories on nudity and and her make up routines, Kardashian shared a post about the recent war on her Instagram account. Immediately, calls to report the account for spreading misinformation and hateful content spread across social media platforms, encouraging Azerbaijani users to respond to the American celebrity of Armenian descent and report her account. The story was not taken down but did expire, after which Kardashian shared the same text under one of her posts.

But one of the most aggressive standoffs was yet to come. On July 21, a group of Azerbaijani emigres was attacked by the members of the Armenian American diaspora. Not only did the pictures from the scene result in outrage in Azerbaijan and across the Azerbaijani diaspora community, but divided members of the community into those who condemned any violence and those who fully supported attacking the other side.

As protests continued across other capitals, a group of diaspora representatives from each country decided to address the ongoing violence and call on the representatives of both communities to respect universal principles of peaceful assembly. United under the hashtag #WordsNotSwords, the campaign was originally signed by six members of the diaspora community on July 23.

It takes the form of a statement shared on Twitter and social media, which reads as follows:

As members of the Armenian and Azerbaijani emigrant communities across the world, we condemn the ongoing acts of violence and bigotry perpetrated by individuals within our communities towards one another, in the name of patriotism.

While our societies have fundamental disagreements regarding the Armenian-Azerbaijani conflict, fistfights in streets across the world do nothing to advance the cause of either side. Instead, they are an affront to basic safety and human dignity.

As fellow immigrants, we call upon all members in our Diaspora communities to engage in peaceful activism, to respect the rights of others to do the same, and to reject violence, dehumanisation, and discrimination.

To date there have been no responses to the initiative from officials or state institutions in either Armenia or Azerbaijan.

In just a few days, the number of signatures grew to include over 160 representatives of the Armenian and Azerbaijani emigre and diaspora communities. GlobalVoices collected testimonies from the original co-authors of the statement:

Cavid Aga, an Azerbaijani student and journalist, reflects on the importance of shattering preconceptions and engaging with the other side face to face:

I was born during the war and grew up with children who lost their homes and found their way to Baku. Growing up with them, I took on their feeling towards Armenians too. After leaving my country to study in Turkey 10 years ago, I have met several Armenians in different countries and understood that they all had different stories […] Racists are always ready to jump into conclusions, let's not give them an excuse. On the contrary, we have many opportunities abroad which we don't have in our countries – such as meeting real people with real stories. I urge my fellow diasporans to seize this opportunity and talk to each other, a step our governments couldn't manage so far.

Ulvi Ismayil, a historian and researcher based in Washington, D.C. is all too familiar with the language of war and aggressive rhetoric. Ismayil recalled the rhetoric he heard when the conflict began in 1988 and despite his age, being only twelve at the time, remembers how each side accused the other of starting hostilities first, and argued over who was more ruthless. “As a witness to those days, I know the dangers of today, and where this all can take us,” said Ismayil. He has also signed other calls for peace, like this one in 2014, calling for the restoration of the ceasefire on the border:

The role of a peacemaker is not easy. You have to argue and try to convince naysayers from every corner, and sometimes say the unthinkable, especially when the situation at the border escalates this far. But you never give up and must be constantly alert and sometimes sacrifice a lot of things – friendships, connections and etc. Nothing stands above peace.

Phil Gamaghelyan is assistant professor at the Joan B. Kroc School of Peace Studies at the University of San Diego and co-founder of Imagine Centre for Conflict Transformation who has worked on several official and unofficial initiatives to facilitate reconciliation and prevent further conflict. He says that he has “continually observed the refusal of the Armenian and the Azerbaijani political, cultural and academic elites to engage meaningfully with the peace process or take steps necessary to prepare their societies for peace.” Meanwhile, the peaceful coexistence of Armenians and Azerbaijanis abroad “dispelled the absurd notions of ‘genetic incompatibility’ or ‘perpetual enmity'”, he continues.

As we argued in our petition, the spillover of violence to the communities outside the zone of the Nagorno-Karabakh conflict itself does nothing to advance the cause of either conflict side, yet it harms the image of both communities and the South Caucasus in general in the eyes of the world, needlessly endangers the already difficult lives of migrants, and further shrinks the space for dialogue. I call on all political and cultural leaders in the homelands and in the diasporas to rise to the occasion, stay away from finger-pointing, and condemn any and all acts of violence, especially those perpetrated in their name and by the representatives of their own communities.

Simon Maghakyan, a Denver-based Armenian-American activist and researcher, highlighted the human aspect to the recent clashes:

We initiated #WordsNotSwords to protect our communities across the world by asking our fellow Armenian and Azerbaijani emigrants to make individual choices that respect the safety and dignity of every human. With our own example, we show that – despite our fundamental differences regarding the Nagorno-Karabakh conflict – Armenian and Azerbaijani individuals can agree to disagree peacefully.

It is too early to say whether with all the signatures collected #WordsNotSwords will change much of the negative rhetoric that continues to this day. But it is heartening to see that among the two communities there are at least 160 who condemn violence and respect people's right to peaceful protest.

Editorial note: The author would like to add that she is a signatory of the #WordsNotSwords declaration