Amid threats of mass arrest, Filipino protesters rally during Duterte’s State of the Nation Address 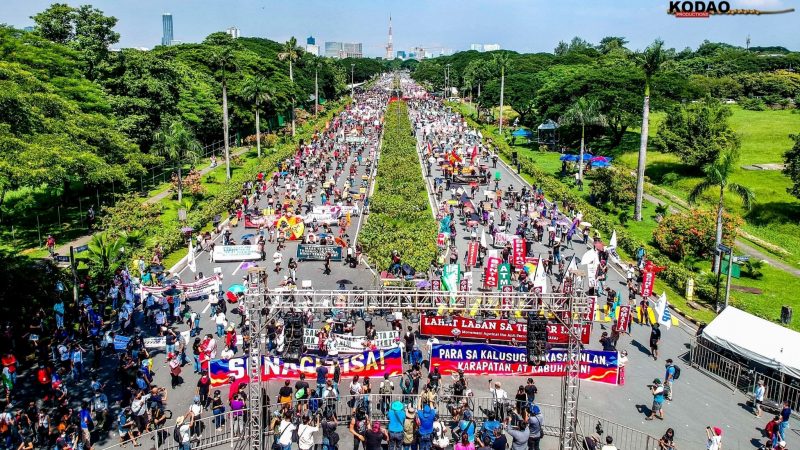 Thousands of individuals from various groups join a national protest against the Filipino government on the occasion of the 5th State of the Nation Address (Sona) of President Rodrigo Duterte. Photo by Kodao Productions, a content partner of Global Voices, used with permission.

On July 27, despite an official ban on demonstrations, Filipino activists gathered at the country's premier state university to express their frustration at their government on the occasion of President Rodrigo Duterte’s fifth State of the Nation Address (SONA).

On that day, all roads leading to the campus of University of the Philippines Diliman in Quezon City filled with protesters defying threats of arrests and the deployment of over 6,000 policemen in the national capital. An estimated 8,000 people gathered in the national capital, while hundreds more joined protest actions in other major urban centers across the country.

The main gathering place was UP Diliman campus, a special place given that an agreement secured by the protest movement against the Marcos dictatorship in the 1980s prohibits police and military from stepping foot on it. This has made the university one of the few remaining places where people can exercise their right to assembly. Yet on July 27, police checkpoints were set up at its gates, but that did not deter people from assembling.

The protesters gathered to slam the slow, incompetent and militarist response of Duterte's government to the COVID-19 pandemic. The activists were also denouncing the intensifying state repression marked by recent passage of the anti-terror law  which is widely feared as a signal to further crackdown on government critics. The confirmed number of COVID-19 cases in the Philippines has spiraled to 93,000 at the end of July but the Duterte government continues to dismiss all criticism of its efforts, and insists that everything remains under control.

Here are more images of the demonstration: 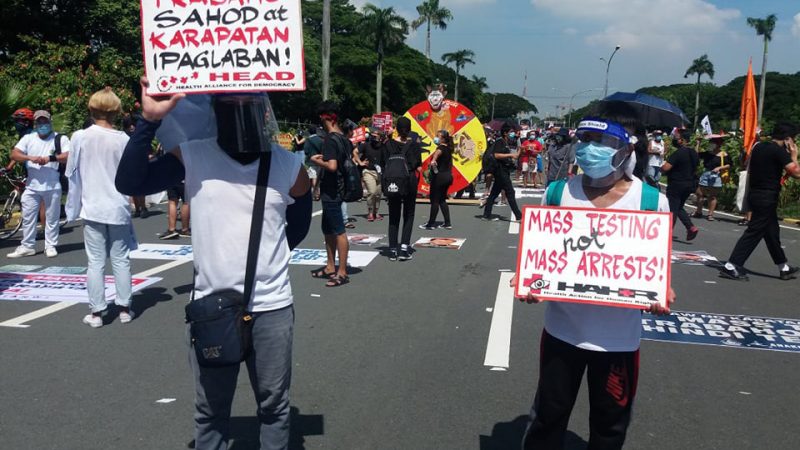 “Fight for employment, wages, and rights”, the placard on the left reads. Photo by Kodao Productions, a content partner of Global Voices, photo used with permission. 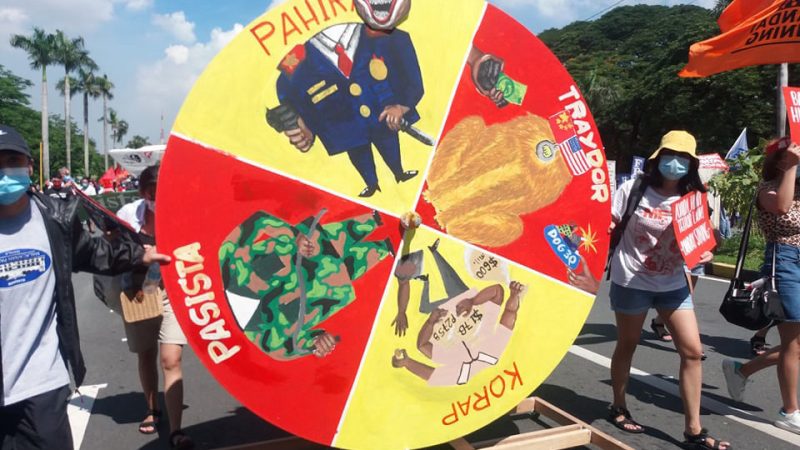 The United Nations Commission on Human Rights recently raised the alarm on the rising cases of red-tagging, harassment, arrests, and killings of activists falsely accused as “communist-terrorists” in the country. This policy has not stopped amidst the pandemic: the Duterte government has in fact stepped up efforts to shut down independent news sites such as Rappler and continues to harass smaller alternative media outfits. The Philippine Congress, which is dominated by Duterte allies, denied on July 10 a franchise to operate for ABS-CBN, the country’s largest TV and radio broadcaster. Police also swooped down on the office of the NGO Kadamy that fights against urban poverty, arrested its members, and confiscated copies of alternative news magazine Pinoy Weekly which were tagged as “subversive documents.”

On the day of the president’s address, the Department of Interior and Local Government headed by its secretary, former General Eduardo Año, issued an order banning protest actions.

But demonstrators went ahead, and, as can be seen in the following photos, wore face masks and strictly followed rules of physical distancing to ensure their own safety. 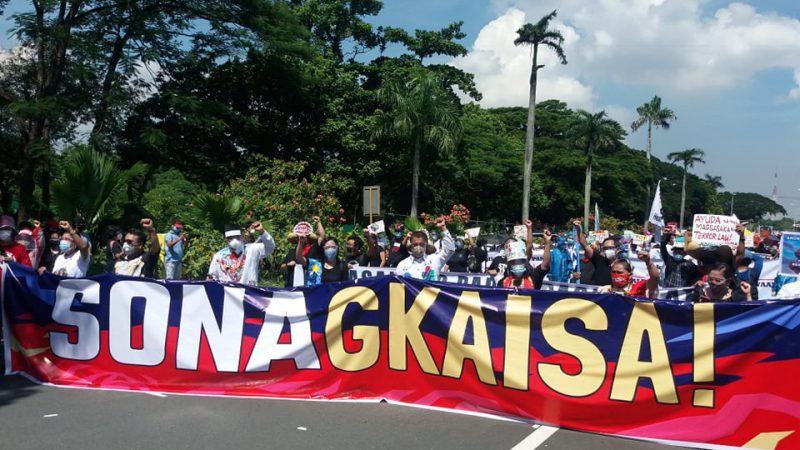 Dubbed the united people's SONA, the mass protest featured #SONAgkaisa as a theme. The hashtag combines the words SONA and nagkaisa (united) to emphasize the coming together of various political forces and persuasions. Photo by Kodao Productions, a content partner of Global Voices, used with permission. 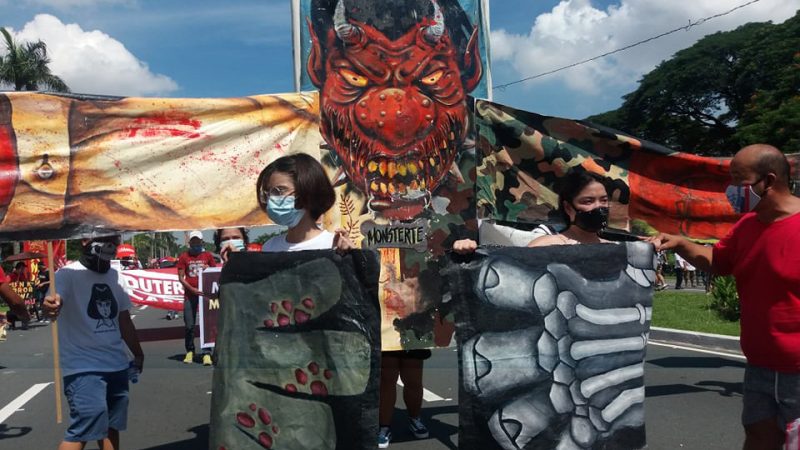 Photo of the July 27 demonstration by Kodao Productions, a content partner of Global Voices, used with permission.

The gays really be quick with #folklore‘s impact ? Because Taylor Alison Swift is what? An anti-fascist! #SONAgKAISA pic.twitter.com/9ooOFdGUXz

One of the highlights of the event was the singing of a Filipino adaptation of “Do You Hear the People Sing” from the theatrical production of Victor Hugo's Les Miserables, “Di Niyo Ba Naririnig?”:

During the day of protests, Metro Manila police chief Debold Sinas ordered the arrest of anyone seen carrying protests placards and streamers. In total, 141 people were arrested nationwide for participating in the protests. This includes 4 urban poor women in Pandi, Bulacan who were jailed for joining an online protest. Some 64 individuals were also arrested on their way to SONA protests in Cavite province south of Metro Manila:

LOOK: The Cavite 64 remains held for no explicit reason at a covered court beside the Carmona Police Station in Brgy. Maduya, Carmona, Cavite.

They were later released for lack of charges.