Within a fortnight, authorities have outlawed select protest phrases and arrested activists for allegedly inciting secession 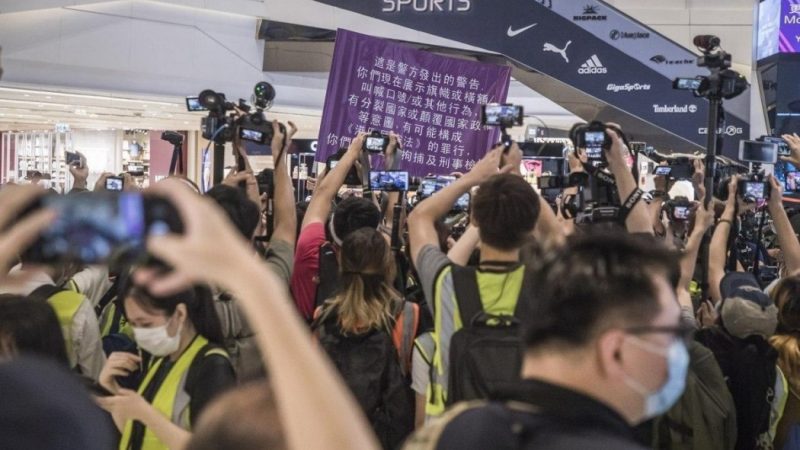 The original post was written by Jennifer Creery and published on the Hong Kong Free Press on August 1. The following edited version is published on Global Voices via a content partnership agreement.

Once a vague spectre, national security legislation became a reality in Hong Kong last month when, in less than six weeks, Beijing imposed a law granting authorities sweeping powers to clamp down on dissent.

Drafted behind closed doors without local legislative input, the law ostensibly targets acts in the city deemed a threat to state security, including terrorism and collusion with foreign forces, following months of sometimes violent democracy protests.

With broad, catch-all provisions that encompass acts committed abroad and charges punishable with up to life imprisonment, the law has sent shivers down the spines of activists who fear it will chip away at the territory’s treasured civil liberties.

The move was welcomed by the pro-Beijing camp as heralding the return of social “stability,” but activists and nongovernmental organizations have warned it will spell the end of One Country, Two Systems.

As some 7 million residents wake up to a radical shift in the city’s political order, HKFP rounds up some of the key developments in Hong Kong as the new legislation was rolled out.

First arrests under the security law

Despite the newly-gazetted law and the coronavirus restrictions on gatherings, thousands took to the streets on Hong Kong Island on July 1. Under the new law, police made their first arrest of several individuals including those who carried Hong Kong independence signs. On the same day, police introduced a new purple flag warning crowds that they may have violated the security law.

Reverberating through shopping malls across the city, the chant “Liberate Hong Kong, the revolution of our times,” came to define last year’s protests.

Two days after the enactment of the security law, the government singled out that popular protest slogan as implying separatism; anyone found uttering or displaying it could be arrested, it warned.

Legal experts have questioned whether the ban is binding in nature. But police swiftly cautioned pro-democracy political group Tin Shui Wai Connection at a street stall and arrested a demonstrator for holding a placard featuring the forbidden slogan in Yuen Long on July 27.

Protesters have responded using creative workarounds, such as near-homonyms, a geometric typeface of the eight characters, or using initials of the romanised slogan. Some voiced their opposition by holding up blank signs, while others pasted blank Post-It notes on walls to mimic “Lennon Walls” – public display boards once filled with messages of support for the protest movement.

Days after the enactment of the law, at least nine pro-democracy titles disappeared from public library shelves, prompting fears over censorship.

Among the books removed for “review” included incumbent democrat Tanya Chan's “My Journeys for Food and Justice,” activist Joshua Wong’s coauthored “Unfree Speech,” as well as Horace Chin’s “On the Hong Kong City-State and Hong Kong State-survivors,” penned under the name Chin-Wan.

Hong Kong Education Secretary Kevin Yeung declared on July 7 that no one in schools should “hold any activities to express their political stance,” and teachers must not allow students to play, sing or broadcast the popular protest song “Glory to Hong Kong” on campuses.

Police with a warrant descended on the offices of the Hong Kong Public Opinion Institute (HKPORI) on the night of July 10 with the objective of seizing computers.

The raid over a suspected data leak coincided with the pollsters’ involvement in self-initiated democratic primaries to select candidates to run in September’s legislative election, which went ahead as planned the following weekend. Officers left without removing any electronic devices.

Taiwan’s top acting representative in Hong Kong Kao Ming-tsun left the city on July 16, after refusing to sign an affidavit of support for “One China” for his visa extension application.

“One China” is a diplomatic principle acknowledging only one Chinese government and Taiwan as part of China. Taiwan has been ruled by the Republic of China government since 1945 and considers itself to be an independent country.

Kao has been the acting top representative after the designated official Lu Chang-shui's visa application was left pending since 2018. Taiwanese officials have accused the Hong Kong government of imposing “additional political conditions” when processing visa renewals and applications since the enactment of the security law.

The New York Times suddenly revealed on July 14 it was to relocate its Hong Kong digital news team – equalling about a third of its staff – to Seoul, South Korea. It cited press freedom fears arising from the new legislation and unusual difficulties securing work permits, “rarely an issue” before, it added.

The paper said it would keep some of its correspondents in the territory to chart its morphing political landscape.

On July 29, police arrested four former members of the pro-independence group Studentlocalism, including ex-convenor Tony Chung, ex-spokesperson Ho Nok-hang, as well as ex-members Yanni Ho and Chan Wai-jin, on suspicion of inciting secession, in the first major roundup following an investigation under the security law.

Speaking to reporters afterwards, the department's Senior Superintendent Steve Li pointed to social media posts created after the law’s enactment that allegedly advocated the “joining of all pro-independence forces” to establish a “Hong Kong republic.”

Studentlocalism announced a day before the government gazetted the security law that it would shift all local operations overseas. Critics sounded the alarm over potential retroactive application of the law following the arrests.

Less than 24 hours after the student arrests, returning officers invalidated the nominations of a whopping 12 democratic candidates seeking to run in September’s legislative election.

One of the reasons cited as grounds for disqualification was expressing opposition to the security law which, “in principle,” meant the candidate did not sincerely intend to uphold the Basic Law.

In an ominous statement, the government said it would not rule out the possibility of barring more candidates in the future. Wong on Friday warned authorities were attempting to scrub the legislature of opposition figures in order to maintain the pro-establishment camp’s majority.

The controversial legislation includes passages which make it applicable worldwide, putting Hongkongers overseas at risk of arrest should they return to Hong Kong or Chinese jurisdiction.

Hong Kong democrats, however, said the government was conspiring with pro-establishment lawmakers to stall the poll, using COVID-19 as an excuse.