A beach in Ljubanishte, Lake Ohrid, North Macedonia on July 24, 2020. Photo by Filip Stojanovski, CC BY.

North Macedonia has opened its borders to tourists from the European Union (EU) and other European countries, but measures related to COVID-19 prevention are discouraging visitors from choosing the country as a travel destination.

A big factor is that some EU countries, Hungary for example, require their citizens returning from North Macedonia to spend two weeks in self-isolation upon arriving home. Germany requires travelers returning from 130 countries designated as risky to conduct mandatory diagnostic tests. These rules vary from country to country and the EU has set up a website Re-Open EU to keep track of them all.

North Macedonia has been praised by WHO for its high level of transparency in reporting COVID-19 cases. In a population of about two million, the country has recorded 10.617 confirmed cases since the start of the pandemic, with 480 deaths so far. In recent weeks, the number of new cases has ranged between 100–200 daily.

Tour operators bringing foreign tourists into North Macedonia must conform to local anti-pandemic regulations, starting with the requirement that buses must provide physical distancing for passengers, with a limit of 50 percent of bus seats occupied. So, each full tour bus coming from Poland, for example, must be met by an empty local bus right after crossing the border, and half of the passengers must transfer to the local bus to continue the journey. Renting extra vehicles increases the overall price of the arrangement, making it less appealing to tour operators.

So, unlike in previous years, most foreign tourists visiting the country's prime tourist destination—the Lake Ohrid area—are those whose main destination is Albania, which has been much more open to visitors, and which, consequently, has a better financial outlook this tourist season. Some EU visitors to the Albanian coastline, however, do make day trips into the scenic UNESCO-protected region in North Macedonia, including the old town of Ohrid and surrounding natural beauty spots.

“I work with an incoming agency and as an authorized tourist guide; I haven’t earned any money since New Year. I share these difficulties with about 5,000 people like me who are in this sector. This season is certainly over and we are focusing on 2021, but what shall we do till then? Lately, I have been trying to rent my boat on Lake Ohrid, but the domestic tourists cannot afford it, and I still hope that some individual travelers or smaller groups will come to Ohrid, so that I can be of service to them for touring the area or renting my boat. And I am very much sure that the travelers will remember the beauty of the Ohrid region and will go back to their countries with pleasant memories and revelations of new destinations.”

The country has instituted pandemic-related protocols to protect visitors and tourism workers. The beaches, which are mostly leased by private operators, must provide physical distance between sunbeds; bars and restaurants may sit only four persons at a table, and waiters and other workers all have to wear face masks and institute other prevention measures.

The Lake Ohrid area features a number of attractions, including some that are accessible only by boat, such as so-called “wild beaches” under the cliffs of the Galichica National Park.

The beachfront of Lake Ohrid, where waters touch the front yards of 19th-century homes at the core of the Old Town, which is crowned by a citadel dating from the early 11th century. Photo by Filip Stojanovski, CC BY.

Meanwhile, citizens of North Macedonia face closed borders, except with neighboring Albania and Serbia. They are not allowed to visit Greece or Montenegro, while in order to enter Bulgaria or Croatia, where the sea is much farther away, they must show negative results of recent PCR tests at the border. For Croatia, they also have to show proof of booking arrangements.

For that reason, the tourist sites get many domestic visitors, especially during the weekends, when cities empty and lakes or mountain resorts get somewhat overwhelmed with visitors and garbage (and where a local initiative is trying to counter the littering of Ohrid beaches through voluntary cleaning actions).

Domestic visitors often use their own weekend houses or low budget rented rooms instead of hotels, and, therefore, bring in much lower profits. They also buy fewer souvenirs, and are much less interested in guided tours explaining the cultural or other aspects of the country's heritage because most of them have already experienced the sights or feel they know all the information they might get from paid guides.

The real lifeline for the tourism industry in North Macedonia is foreign guests, but there's little chance they would arrive in force this year. This has become apparent in the other big tourist destination in the country—the capital, Skopje. Its old town, with a well preserved Ottoman Old Bazaar which in size is second only to Istanbul's in the Balkans, had been bustling with tourists in previous years. However, since the pandemic started, even after the curfews and travel restrictions had been lifted, shopkeepers have been having a difficult time making ends meet. 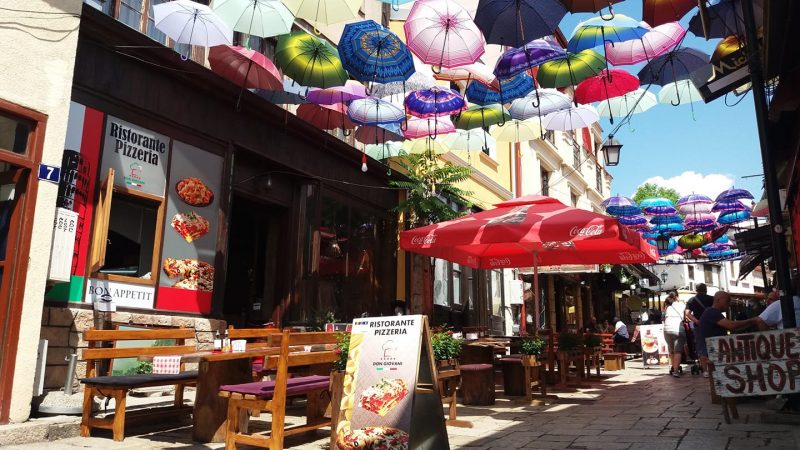 Since the pandemic, the Old Bazaar in Skopje has been receiving far fewer visitors than in previous years. Photo by Facebook page Ristorante Don Giovani-Skopje. Used with permission.

“We have been forced to pause work on Sundays, which before used to be one of our busiest days of the week. We also close much earlier, at around 6 or 7 p.m., instead of 10 p.m., because the bazaar is empty of people in the evenings,” says Xhemal Bajrami, manager of Don Giovani restaurant, located in one of the busiest streets in Skopje's old town. 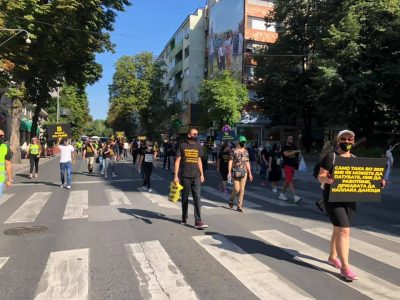 Tourism workers protest in Skopje, North Macedonia, on July 29, 2020. The sign reads: “Only in this way in 2021 would you be able to travel, would we be able to work, and  would the state be able to charge taxes.” Photo by Julijana Daskalov. Used with permission.

While 2019 was on record the most successful year for tourism in North Macedonia, the official statistics from May this year indicate severe losses for the tourism industry.

Many companies have cash reserves that can last only through the summer, and have been warning that unless they get substantial support, layoffs will have to be made come September.

On July 29, tourism workers held a peaceful protest in the capital Skopje, demanding state aid, under the motto “tourism is on ventilators,” referring to the final stage of treatment of COVID-19 disease.

They called for state subsidies to pay their minimum salaries until the end of the year, as well as various forms of tax relief that would prevent the bankruptcy of these companies.

The caretaker government, which has been running the country since the elections that took place on July 15, provided some subsidies for tourism companies during the spring, including granting citizens receiving minimal salaries 50-euro vouchers. However, they haven't responded yet to the latest round of demands by tourism sector representatives.