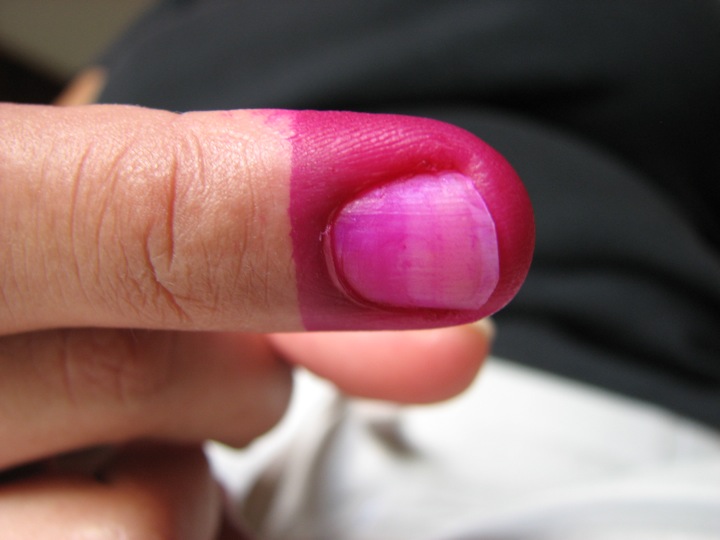 “The finger that voted”; photo by Georgia Popplewell on Flickr, CC BY-NC-ND 2.0.

Trinidad and Tobago's general elections will take place on August 10, and as much as electioneering in the time of COVID-19 has had some voters calling for campaign ingenuity, the substance of the messages has, for the most part, been more of the same.

The nonprofit Womantra, which educates and advocates for policy reform around the issues of women's rights and gender justice, has put out a statement about patriarchy — yet another source of dissatisfaction in the elections:

All candidates seeking public office should be meticulously screened, not only for portfolio and party compatibility but also for biases that impact their ability to serve the national community. Sexism is among these biases and one of the most dangerous. […] the words and actions of our politicians have been well documented by local media, the legacy of which informs what is deemed acceptable behaviour for those in authority and continues to haunt us today. In the midst of the 2020 general election campaign, it is clear that this problem persists.

The statement identified certain issues the group saw as problematic, including the nomination of a candidate currently facing sexual assault charges; another who has had “online allegations involving sexual offences” being levelled against him; and a third who has had an interim protection order taken out against him by a former partner.

No judgement has yet been handed down on the rape charge, no formal charges have been made against the candidate accused of sexual offences, and the protection order against the third candidate expired on July 23, upon which he was due to appear in court regarding the matter.

Womantra described these as “instances of grossly misogynist narratives:”

We note that these problems are wide reaching and that aspiring Members of Parliament from at least 3 political parties have come under scrutiny, underscoring the need for urgent and collective attention to end violence against women in politics.

Their position was echoed by Gabrielle Hosein, a lecturer at the Institute for Gender and Development Studies at The University of the West Indies (UWI), who noted that struggles over democracy are “always interwoven” with those of gender and sexuality, and condemned such “continued tolerance for gender-based and sexual violence, which are not yet considered so abhorrent that they deny men political legitimacy”:

If nothing else, understand young women’s fear that these could be the men who hold power over them and to whom they must pay respect, like those abusive uncles who somehow retain their place and authority in the family.

As such, Womantra has called for amendments to Trinidad and Tobago's constitution so that “persons who are convicted of any offence involving sexual harassment or assault be disqualified from being elected or appointed as a member of the Senate and/or the House of Representatives.”

Language emerged as another key issue, with a request that the booklet on parliamentary language is updated “to admonish the use of sexist statements, comments or words:”

Borrowing from the 2020 Council of Europe (COE) report, we echo the call for our Parliamentarians to take a strong stand against sexist attacks targeting women and to introduce or revise codes of conduct explicitly prohibiting sexist behaviour and speech in their assemblies. The COE Report also recommends that States be vigilant during election periods with regard to sexist attacks against women and to monitor candidate nomination procedures for inequalities.

Womantra also saw the Trinidad and Tobago Police Service (TTPS) playing a critical role by taking “all allegations made against political officials or aspiring representatives seriously and commence investigations promptly, particularly given the impending election of August 10.”

Citing the case of young political candidate Nabila Greene, who allegedly appeared in a video in which a faceless man showered her with money, Hosein observed that “gender and sexuality often become weaponised in electoral campaigns.” Although a 29-year-old man has since been charged with harassment and attempted extortion of Greene, Hosein maintained that “it’s actually irrelevant what women […] do in private, legal and consensual entanglements”:

Undermining women’s aspirations for political leadership, through breaking their trust and violating their privacy, is a deliberate containment of their democratic participation. And, it works. It’s one disturbing reason why there are fewer women in political leadership today.

For Womantra, it came down to scrutiny:

Perpetrators in positions of power not only silence victims but are granted access to further perpetuate their power and control over those they are charged with protecting. If violence against women is allowed to run rampant at the House of Representatives, how can gender equality be achieved in the lower rungs of the public service, the corporate sector, and within the home? We cannot and must not allow persons who commit crimes and devalue women, in words or in deeds, to have access to the seat of power in this country. Violence against women cannot be business as usual […]

Eight other civil society organisations have endorsed the statement, including Conflict Women, which financially empowers survivors of domestic and sexual abuse, and the Caribbean Male Action Network, which includes men and boys in the fight towards gender equality.