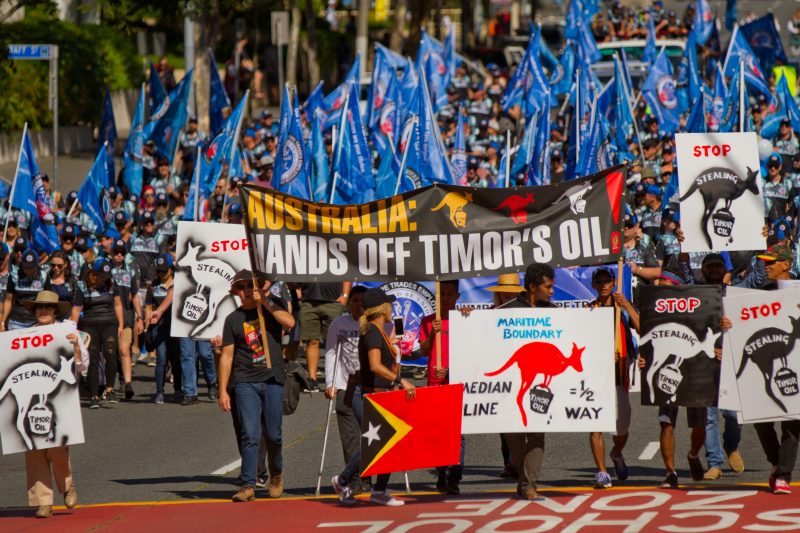 A government illegally bugs the office of a foreign country’s Prime Minister during treaty negotiations. The spy in charge who turned whistleblower and his lawyer face secret trials. Connections are exposed between government politicians and a big oil company that gained financially from the treaty.

In 2004 Australia and the new nation of Timor Leste were negotiating a treaty over their border in the Timor Sea. The future of rich oil and gas fields was at stake.  The Australian Secret Intelligence Service (ASIS) bugged PM Xanana Gusmão’s office to steal an advantage in the talks. The Australian Foreign Minister at the time, AlexanderDowner, apparently ordered the surveillance. He later took a consultancy with Woodside Petroleum, the company that benefited from the original treaty. There have been other suggestions of conflicts of interest. That treaty was eventually renegotiated in 2018 after the deception was made public.

Global Voices reported on the unfolding story in 2013:

East Timor: ‘Australia Spied on Us for Oil Secrets’

The identity of the whistleblower, known as Witness K, has been suppressed. In 2018 he and his lawyer Bernard Collaery were charged with conspiracy to give secrets to Timor Leste. This required the consent of the minister in charge of justice, the Attorney-general Christian Porter. They are facing separate trials.

Witness K has pleaded guilty but maintains that his only breach was to prepare an affidavit for arbitration hearings between the governments at the International Court of Justice in The Hague.

Collaery, who is a former Attorney-general of the Australian Capital Territory, has pleaded not guilty. Part of Collaery’s trial will take place in secret following a court decision that protects sensitive or classified information.

Many people on social media have been outraged by the prosecutions, fearing the direction their country is taking:

“A crime against one of the poorest countries in the world by one of the richest.” This is our Australia. #bernardcollaery #witnessk #DroptheProsecutions https://t.co/RY9JC8V8JK

The Bernard Collaery persecution has to be one most evil prosecutions (that we know about) in Aust history.
A lawyer, assisting a whistleblower going to International Court of Justice, being secretly tried for calling out morally bankrupt if not criminal conduct by Aust Govts https://t.co/8gE4Dmi4cj

Many also question just who or what is being protected. The intelligence agencies? Government ministers who authorized the spying operation or have approved the prosecutions? The commercial oil interests and others who profited from the original treaty?

The Howard Government spied on our Timorese neighbours in an attempt to plunder their oil & gas. Now the Morrison Government is trying to hide the truth and ‘bury the bodies’. It’s outrageous, morally bankrupt and must be challenged https://t.co/pxpauDh9gD

Others believe that the real purpose behind the drawn-out legal proceedings is to deter possible future whistleblowers.

In August 2019, the Australian Broadcasting Corporation (ABC) Four Corners program examined the Timor Leste scandal in Secrets, Spies and Trials. It explored ‘the tension between those who say national security is paramount and those who fear the steady encroachment of state security on the public's right to know’.

Stephen Charles, a former judge of the Supreme Court of Victoria and barrister, has represented both ASIS and ASIO ( the foreign and domestic intelligence agencies) in past cases. He was just one of several senior legal figures interviewed in the program who were disturbed by the direction of the trials:

It is a fundamental aspect of the rule of law that proceedings take place in public. It is difficult to imagine any justification for these proceedings taking place in secret.

Everyone who reads the newspapers is aware that ASIS officers entered and bugged the Timorese cabinet premises. Everyone is aware that the result of bugging those premises was that Australia got a huge and very unfair advantage in the negotiations being carried out between Timor and Australia.

Prisoner in the iron mask

The trend to prosecute whistleblowers has been alarming. In an unprecedented case, decorated military intelligence officer Witness J’s identity, trial, conviction and prison sentence were kept completely secret. He and Bernard Collaery have been given Empty Chair Human Rights awards by civil rights organisation Liberty Victoria:

The secret trials… challenge one of the fundamental bases of our legal system: the requirement for open justice and accountability.

The cases… highlight the need for strong action to ensure that any such trials are held in open court and subject to public scrutiny.

Former military lawyer David McBride also faces a potentially secret trial for blowing the whistle on alleged war crimes by Australian soldiers in Afghanistan. His “Afghan Files’ revelations were behind a Federal police raid on the ABC and possible criminal charges against one of its journalists.

There is an official investigation being conducted by the Inspector-General of the Australian Defence Force, with alarming claims continuing to emerge such as the murder of non-combatants. The slow progress of the inquiry is a concern for some on social media:

These trials are being held as Australia is fast becoming a security state with surveillance laws undermining digital rights and police raids on news organisations and journalists attacking media freedom. Journalist Paul Gregoire, writing on The Big Smoke opinions platform, argues that the decline of open justice in Australia has “glimmerings of totalitarianism”.

Journalists at the ABC have taken to Twitter to add their voices:

How can Australia ever pursue arguments for the importance of free speech in places like China when it criminalises public interest journalism at home? What a shabby, shameful affair this is. https://t.co/BVJNCxcAbk

In a recent development, proposed national security legislation would allow children as young as fourteen to undergo compulsory interrogation by intelligence agents. their parent or guardian could be removed from an interview for being disruptive.In addition, tracking devices could also be planted on cars or in bags without a warrant.