The late prime minister was hailed as a Caribbean man 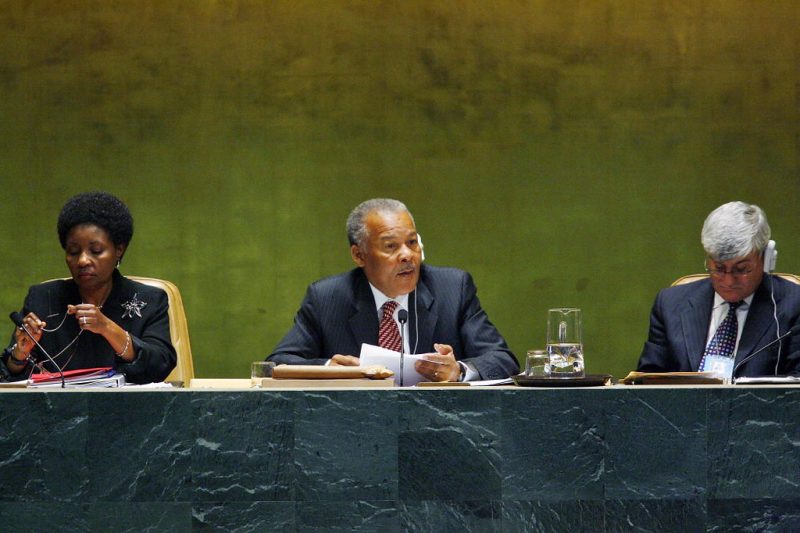 Then prime minister of Barbados, Owen Arthur (centre), chairs the plenary meeting on “The challenge of adaptation – from vulnerability to resilience”, at the United Nations headquarters in New York, on September 24, 2007. Photo by United Nations Photo on Flickr, CC BY-NC-ND 2.0.

The former prime minister of Barbados, Owen Seymour Arthur, passed away on July 27, 2020, at the age of 70.

He was described by fellow Caribbean leaders as “an ardent regionalist” who was “passionate about his country.” Barbados declared three days of mourning in his honour.

Arthur will be remembered as a leader whose knowledge of economics manifested in his uncanny ability to gauge the fiscal realities of a small island developing state like Barbados, and who distinguished himself politically, socially, and economically as both a sage and a charismatic presence.

He led the Barbados Labour Party as the country’s fifth prime minister from 1994 to 2008, serving in the House of Representatives for the parish of St. Peter, where he was raised.

Arthur did his secondary education at the prestigious Harrison College, and went on to study economics and History at The University of the West Indies’ (UWI) Cave Hill campus in Barbados. He subsequently gained his Master’s Degree in Economics at The UWI campus in Mona, Jamaica.

Arthur’s emphatic and down to earth style of leadership seemed to come at the perfect time for Barbados. His efforts to revive the country's foundering economy proved successful: during his tenure, he slashed Barbados’ unemployment rate in half, from over 20 per cent to approximately nine per cent between 1994 and 2000. Mention was often made of his brilliance and how this coexisted with a lack of pretence and easy approachability.

As tributes poured in upon the news of his death, the multifaceted nature of Owen Arthur's statesmanship became clear.

Over the years, he had been appointed to numerous commissions and consultancies, including the Commonwealth Observer Mission to Guyana’s general and regional elections. He also served as chairman of the Commonwealth Ministerial Action Group on Small States and co-chair of the global forum to focus on the Organisation for Economic Co-operation and Development's (OECD) Initiative on Harmful Tax Competition.

Barbados’ sitting prime minister, Mia Mottley, lauded Arthur’s tireless work ethic, noting that he was “was never overwhelmed by the task at hand” and praising his economic reforms as “his greatest domestic legacy”.

Just as significant was Arthur’s proposal during his 2003 election campaign to hold a national referendum to put forward revisions to Barbados’ Constitution, a move geared towards replacing the British monarch with a president as head of state.

Owen Arthur’s unique perspicacity and infinite warmth had a personal impact on many. On Facebook, his friend Tony Hoyos reminisced:

I was always in awe of how brilliant my old school chum had become, with not only a profound grasp of macroeconomics, particularly as applied to our developing nation, but also by his common touch and genuine caring for every Barbadian. Many of us will likely remember unexpectedly meeting Owen at a supermarket pushing his own cart.

Marsha Caddle, who had worked with Owen “on trying to solve the perennial debt issue in Barbados and the region”, said:

There is no economist working today in this region of the world who has not drawn on the wisdom, rigour and intellectual fearlessness of the Rt. Hon. Owen Seymour Arthur. And there is no Caribbean regionalist who does not feel gratitude for the integration vision that he brought to life, and on which we can now build.

Indeed, Owen Arthur helped forge the foundations for renewed regional integration, an invaluable contribution to the Caribbean community. With his passing, Barbados and the wider region, has lost a stalwart symbol of patriotism and Caribbean pride.

He is survived by his wife Julie, and two daughters.