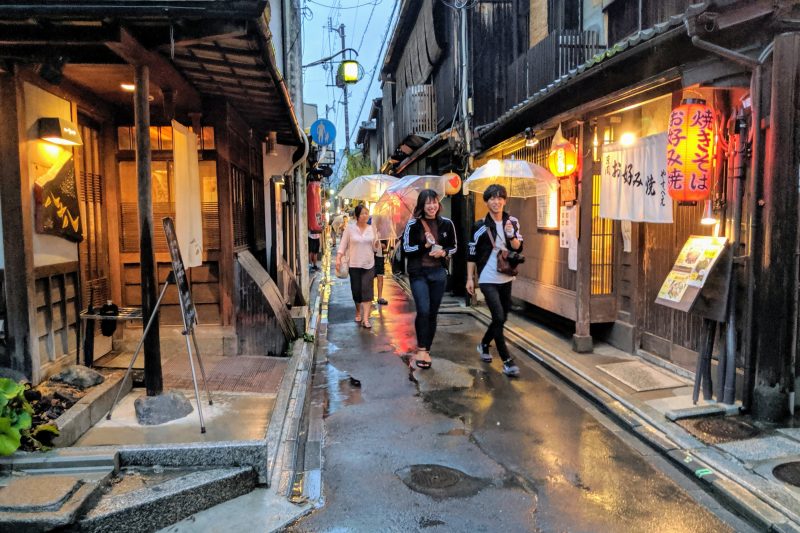 Pontocho, Kyoto, July 2019. Pontocho is popular with tourists, and Japan's new Go To campaign is encouraging people to visit places like this one. Photo by Nevin Thompson.

Mixed messages from Tokyo metropolitan government, which has asked people to limit non-essential trips, versus the central government's 1.68 trillion yen (15 billion USD) “Go To Travel” campaign, which aims to boost internal tourism, have placed Japan in a “double bind” over the virus.

On Wednesday, July 22, Tokyo governor Koike Yuriko asked residents of the capital to “act as if a second wave (of COVID-19) is already here.” With a population of 15 million, Tokyo remains the epicenter of the latest increase in COVID-19 cases in Japan. The metropolitan region has identified at least 5,000 cases of COVID-19 so in July, or about 45 percent of all infections since the start of the pandemic.

During the week of July 20, Tokyo experienced its daily highest rates of confirmed coronavirus cases ever, with the number of infections exceeded 200 for six days in a row in Tokyo. There are fears there could be an explosion of COVID-19 in Tokyo by August.

Other major cities in Japan, including Osaka and Fukuoka, also experienced a rising number of COVID-19 cases in July, while the isolated island community of Sado saw its first case of the disease. Yoron, a small island community in Japan's far west that is popular with tourists has seen 34 infections so far, with 5 in the past week.

Despite a daily rising number of COVID-19 cases, by the end of the week and the start of a four-day long weekend, on July 24, Prime Minister Abe Shinzo, ignoring government policy, had still refused to declare a state of emergency, stating the situation is still “under control.” Japan had declared a nationwide state of emergency once before in April and May that did manage to reduce the number of daily infections.

On the first day of a 4-day weekend for which the government has been forking out much-opposed traveling coupons to boost inter-prefectural travel, Tokyo records its worst ever number of new infections.
Many other prefectures broke records yesterday. Commonly sense 💩 https://t.co/qIDESp8E30

Instead, the Abe Shinzo government continued with its plans to launch its “Go To Japan” campaign on Thursday, July 22, and the start of the four-day long weekend. The “Go To Japan” campaign provides travelers with a variety of subsidies covering travel and accommodation of up to 20,000 yen (200 USD) per person per night for holidaymakers in 40 prefectures across Japan.

Due to its higher number of infections since the start of the pandemic, Tokyo is excluded as a tourism destination. However, this does not stop tourists from Tokyo from traveling all over Japan, including to Iwate Prefecture, which has experienced no cases of COVID-19 at all.

Many GoTo tourists flocking to Iwate. “They haven’t had any cases so it seemed the safest place to visit”【GoTo】 観光客が感染者ゼロの岩手に集結 「岩手は安全なイメージ」 https://t.co/bpSk7VDBpG

(Translation of article caption) “Go To Japan Campaign” Travels descend on Iwate Prefecture, which has had zero cases of COVID-19 so far.

Public reaction has been mixed. A July 24 poll suggested that most Japanese people thought that a future state of emergency is only necessary certain regions where COVID-19 is a serious problem, rather than the whole country. Other polls have demonstrated strong opposition to the COVID-19 plan.

There are also emerging reports of corruption, including kickbacks to politicians who supported the 1.68 trillion yen “Go To Japan” campaign. Management of the plan has been outsourced to a major travel agency, rather than being delivered in-house by the government.

Meanwhile, there is some puzzlement over how the “GoTo Travel” slogan was chosen:

Asahi report on how the government's campaign “Go To Travel” slogan has English speakers wincing. Spokesman says it was chosen because “Go”, “To”, and “Travel” are all easily understood words in Japan. https://t.co/eTwtxmEdnK

(Translation of article caption) Is “Go To Travel” grammatically incorrect (in English)? “Well, these are English words that most Japanese people know.”