Anti-fascist movements are re-emerging in Brazil to counter Bolsonaro

Online or in the streets, Brazilians are demonstrating against fascism 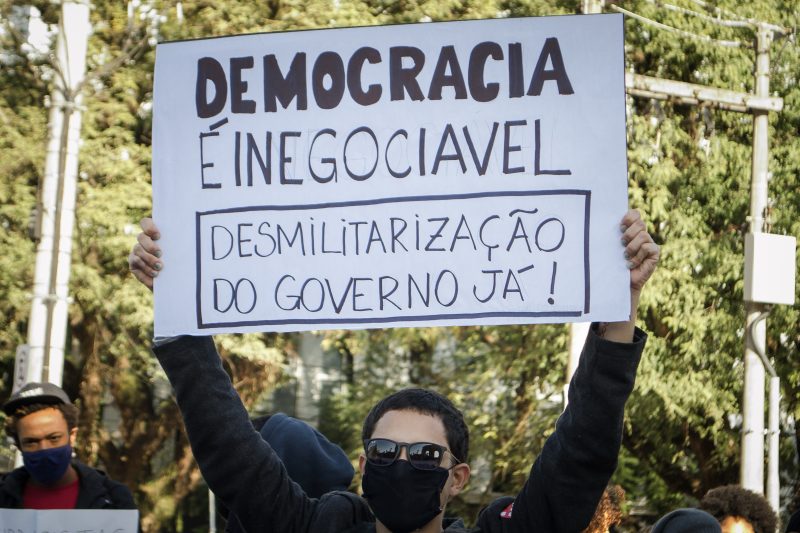 Anti-fascist demonstration in Porto Alegre. On the sign: “Democracy is not negotiable. Demilitarization of the government now!” Photo by Maia Rubinm via Benedictas Fotocoletivo (CC BY-NC 2.0)

Every time Leandro Bergamin goes to a demonstration, he makes sure to not leave home without a mask and hand sanitizer. He usually takes the subway and a bus but tries to stay as far from other people as possible. “The pandemic is urgent, but it is also urgent that we fight for our basic rights”, he told Global Voices via a WhatsApp call.

Bergamin joined one of the most famous anti-fascist organizations in São Paulo: the Corinthians Democracy Collective, inspired by fans from the largest sports club in Brazil.

Football fan groups in Brazil, like the country's other self-identified anti-fascist movements, have a history of fighting for human rights and democracy, but in 2020 they emerged as a counter-offensive to the growing pro-Bolsonaro demonstrations. As for the links between anti-fascism and football, Bergamin explains that:

Football has always had the issue of class struggle and regionalism. Football depends on politics to exist and politics depend on football.

May 31 saw one of 2020's largest anti-fascist demonstrations in São Paulo. According to Bergamin, protestors were profoundly dissatisfied “with the frivolous way the country is being conducted” during the pandemic. Demonstrators criticized the Bolsonaro government's authoritarian turn.

President Jair Bolsonaro showed authoritarian features since he launched his political career 30 years ago. His rise to the presidency has often been credited to his ability to capitalize on collective and individual resentments, which boosted support to call on strong military presence throughout the country. Bolsonaro helped fuel gun ownership, encouraged police killings and supported the Amazonian fires to free space for the agroindustry.

Since COVID-19 hit Brazil, he has been downplaying the pandemic and participated in protests to shut down the Supreme Court. Even after testing positive for COVID-19, he still made public appearances without any protective gear. He is accused of using the pandemic to dismantle environmental regulations, for participating in corruption schemes, and for enabling a genocide against indigenous peoples. He has verbally attacked the press and publicly endorsed violent practices against the opposition. 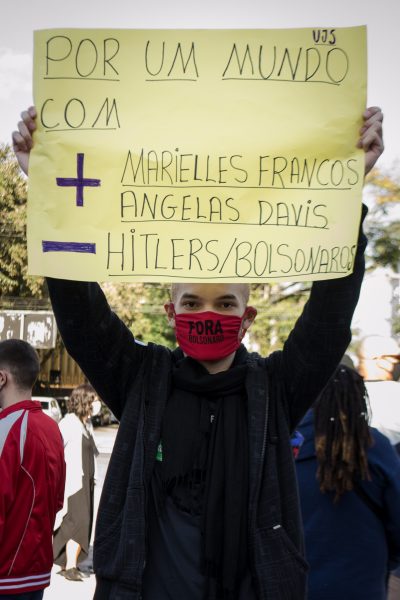 A protester in Porto Alegre, on June 14th, holds a sign saying: “For a world with more Marielles Francos [and] Angelas Davis [and} less Hitlers [and] Bolsonaros. Photo by Maia Rubinm via Benedictas Fotocoletivo (CC BY-NC 2.0)

For Ângela Meirelles de Oliveira, a historian who dedicated her career to studying Brazilian anti-fascism, the anti-fascist movement in the football world is an example of how anti-fascist groups are much more heterogeneous than before. A few structured organizations are supported by a vast, and diversified, support base which includes blue-collar and white-collar workers, different social classes, and different professions.

Anti-fascist groups emerged in Latin America in the 1930s, a decade after their European counterparts, to fight against fascist movements in the region, “which were many”, Oliveira told Global Voices in an email. There was, for example, the Integralist movement in Brazil and the Argentine Civic Legion. They also counteracted growing Nazism in communities of German origin in Latin America.

Both then and now, critics of anti-fascism in Brazil deny that fascism ever existed in the country and therefore perceive anti-fascists as a “meaningless militancy,” said Oliveira. She continues:

On the one hand, [there are] those who saw in sympathizers of anti-fascism only puppets of organized militancy, on the other, [saw them as] a group that would operate for a meaningless cause, since [they believed] fascism never existed in Brazil.

In 2020, the action is less organized, with little hierarchy, and more variety in their ranks. “They also have a very expanded agenda against oppression, given the motions against racism, homophobia, misogyny, and xenophobia,” adds Oliveira.

Today, anti-fascism is also going online. In May, Brazilians who did not take to the streets because of COVID-19 concerns shared the anti-fascist flag on social media. In May, June, and July, this flag — symbolizing anarchism, communism, and socialism — appeared on people's profile pictures on Facebook, Twitter, WhatsApp, and Instagram. Users would also complement the flag with more personal identifiers such as “journalist”, “artist”, “feminist”, or “father”, for example.

Today, as before, anti-fascists and any person accused of fitting this label are under pressure in Brazil. In June, 900 pages with lists containing peoples’ personal data circulated on the internet. The so-called “anti-fascist files” doxxed hundreds of people accusing them of belonging to anti-fascist groups. The files were supposedly taken to the police to counter “terrorist activities”.

According to Oliveira, “The more oppressive a government is, the more they will see opposition as criminal”.

On July 24, the Brazilian news organization UOL had access to documents from the Ministry of Justice which compiled new alleged anti-fascist profiles. In total, there are 579 officials from the government identified as members of the “anti-fascist movement” and three university professors. The Ministry informed that the operation is legitimate and aims to support decisions focusing on “prevention, neutralization, and repression of criminal acts of any nature that violate public order, the safety of people and property”.

The most common argument against anti-fascist movements is about looting or destroying private property. Oliveira responds to this saying that antifas (the common shorthand name for anti-fascists in Brazil) question the justification of protecting private property when the state enforces violence on poor people of color. “In my opinion, the practice and action of [a]ntifas are fundamental to put such State actions in question”, says the researcher.

Bergamin adds that the anti-fascists organizations do not defend violent demonstrations and he says he believes that they have to be peaceful. “But I do not judge because, for many, violence is a way of survival in Brazil”, he says.

Bergamin says that he sees himself protesting more in the near future. “I believe the demonstrations will multiply and amplify,” he says.