The long and winding road to Guyana's 2020 election results

It's 'inconsistent with [the constitution] for GECOM to disenfranchise electors' 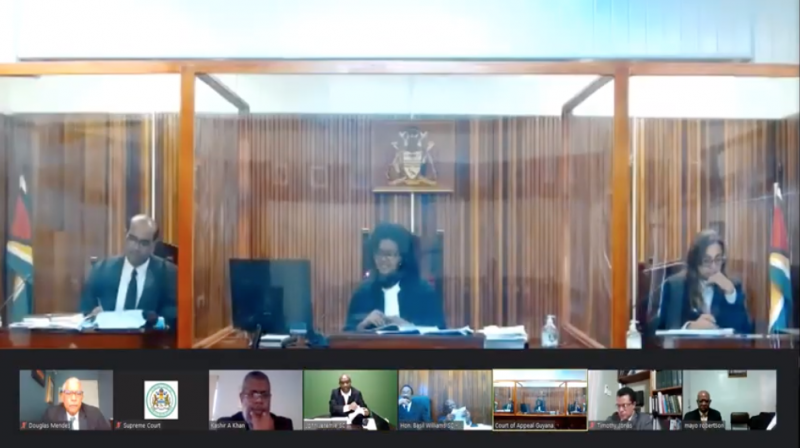 The Court of Appeal hearing regarding Guyana's elections recount case, which took place on July 25, 2020. Screenshot taken from the Stabroek News livestream of the hearing.

Guyana's general election took place on March 2, 2020, a year after it was constitutionally due, but although the ballots have long been counted, the country still has not declared a winner.

It's been an extraordinarily slow road to get to this point, with developments happening in almost imperceptible increments. When ExxonMobil announced on June 30, 2016, that it had made a “world-class discovery” of oil offshore Guyana, the news changed, in one fell swoop, both the country's economic outlook and its political stakes.

By December 2018, Guyana's parliament had voted “yes” to a no-confidence motion brought by the opposition People's Progressive Party (PPP) against the governing coalition A Partnership for National Unity/Alliance for Change (APNU+AFC). Despite the government launching a legal challenge to the parliamentary vote, it was deemed valid, and all eyes turned to the Guyana Elections Commission (GECOM) as it prepared for the impending election.

The latest twist in the ongoing controversy — which has pivoted around the integrity of the election results coming out of Region 4, a stronghold area for the governing coalition A Partnership for National Unity/Alliance for Change (APNU+AFC) — involves the re-verification of votes.

After many false starts, a recount was finally underway by May 6, but it was slow going, with many inconsistencies and accusations of stalling.

More than a month later, on June 9, the Stabroek News ran a story in which several presiding officers from Region 4 polling stations said their deputy returning officers had instructed them not to place certain key documents in the ballot boxes. By then, the recount had been completed and the results confirmed that Clairmont Mingo, Region 4's returning officer, had increased the government's numbers and reduced the votes for the opposition PPP.

It seemed a fait accompli that the revelation would result in GECOM having to declare the PPP, with 33 seats, the winner. Guyana has a total of 65 parliamentary seats — the recount showed that the APNU+AFC secured 31 of these, while a group of other parties got one seat — but things were about to get more complicated.

In Guyana's proportional representation electoral system, there are several steps to ensure voter legitimacy on election day. Voters must provide photo identification in order to gain access to the voting booth. In casting their vote, the “X” denoting their preference must be clearly located next to the candidate/party of their choice, and each ballot paper must be stamped on both sides with a six-digit code. When votes are being counted, these criteria ensure validity.

Though the recount did unearth some differences in voting numbers, they were not significant; the final count was similar to the information listed on the Statements of Poll, the data by which election results must be verified. The initial results declared by Mingo had been read from a spreadsheet.

According to Guyanese law, the validity of votes can only be challenged through an election petition after the overall election result has been declared and a government is in place — at which point, an investigation will be done and the case tried in court based on the evidence presented. Such a challenge cannot be made during the process itself.

However, an APNU+AFC supporter challenged the interpretation of the term “validity” laid out in Article 177 (4) of Guyana's Constitution, an action which questioned the credibility of GECOM's recount results.

The argument hinges on Article 177 (2b), which says that where there are two or more presidential candidates,  if more votes are cast in favour of one than the other, the chair of GECOM shall declare the candidate with the greater number of votes to be president, “acting only in accordance with the advice of the Chief Election Officer.”

Chief Elections Officer Keith Lowenfield, however, — despite instructions from GECOM Chair Claudette Singh to include all the votes that were in keeping with the Statements of Poll — is of the opinion that a number of ballot boxes were corrupted. Contrary to what the law allows for, he has said that he's not prepared to include them in the count.

It is unclear how Lowenfield concluded that hundreds of thousands of votes were invalid, and accusations abound that this is another attempt by GECOM to rig the elections in favour of APNU+AFC. The court action contends that the constitutional parameters surrounding the election of a president allow for the term “votes cast” to be interpreted as “valid votes cast,” and seeks to limit the final declaration of results to only the votes that Lowenfield validated.

Guyana's Court of Appeal agreed with the interpretation that the wording in the Constitution reading “more votes are cast” means more valid votes are cast.

Based on the court's decision, Lowenfield prepared a new report, comprising votes that he deems to be valid. As many as 115,000 votes that had been counted as valid during the recount process were then subtracted, a move that paved the way for the governing coalition to claim victory.

Caribbean Court of Justice gets involved

This decision is at loggerheads with the Caribbean Court of Justice (CCJ) ruling. As Guyana's final appellate court, the CCJ was asked to determine whether Guyana's Court of Appeal “rightly assumed and/or acted within the jurisdiction conferred by Article 177 (4) of the Constitution.” Its decision read:

Unless and until an election court decides otherwise, the votes already counted by the recount process as valid votes are incapable of being declared invalid by any person or authority. By the unnecessary insertion of the word ‘valid’, the Court of Appeal impliedly invited the CEO to engage unilaterally in an unlawful validation exercise. This trespassed on the exclusive jurisdiction of the High Court established by Article 163. It was inconsistent with the constitutional framework for the CEO or GECOM to disenfranchise thousands of electors in a seemingly non transparent and arbitrary manner, without the due processes established in Article 163 and the Validation Act.

Citing the CCJ ruling, Guyana's acting CJ has since declared that only the results derived from the recount can be used to make a final declaration. Lowenfield was asked for a new report reflecting the same. He refused, and was given another written instruction to comply.

Instead, another applicant, Misenga Jones, approached the court to have the recount figures discarded and Mingo's original declaration for Region 4 used for the preparation of Lowenfield's report.

The rationale for this motion appears to be that in its ruling, the CCJ said the recount order itself was “in tension” with the Constitution and therefore couldn't stand — in which case, Mingo's declaration (along with the declarations for Guyana's nine other regions) would be the only other figures upon which to base the Chief Election Officer's report in accordance with Section 96 of the Representation of the People Act.

The CJ, however, ruled that those declarations were no longer valid since they had been overtaken by the recount figures. She also ruled, with regard to the validity of the recount itself as well as the constitutionality of GECOM having the ability to issue the recount order, that these matters were “res judicata” — a matter that had already been decided upon by both the Court of Appeal and the CCJ, and therefore could not be raised again in court.

Attorneys representing the opposition PPP have insisted that Jones’ challenge of the recount can only be approached through an election petition. As such, they have suggested that the Court of Appeal “respectfully step aside” and allow GECOM to finalise and declare the results of the election.

However, the court heard Jones’ appeal on July 25. A ruling is expected within the coming week.