'Journalists must be allowed to report facts freely & independently' 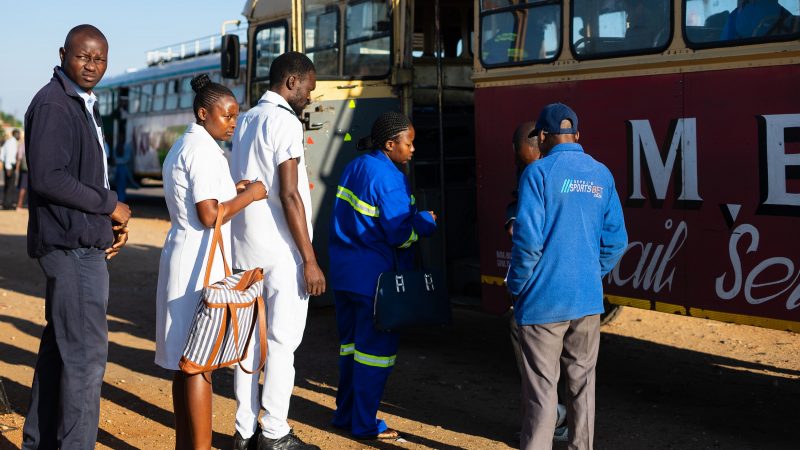 Health workers queue for a bus into Bulawayo City from Nketa, Zimbabwe. Many of Zimbabwe's essential workers lack PPE clothing but have been reporting to works nonetheless, in Bulawayo, Zimbabwe, April 20, 2020.
Credit: KB Mpofu / ILO via Flickr CC BY-NC-ND 2.0.

The arrest of two prominent figures in Zimbabwe signal new levels of crisis in governance as the nation heads toward unprecedented economic decline and social unrest.

Jacob Ngarivhume, leader of a small opposition party called Transform Zimbabwe, and Hopewell Rugoho-Chino’ono, a journalist, are both accused of inciting violence in their calls to end corruption at the highest levels of government, and allegedly participating in plans for an anti-government demonstration scheduled for July 31.

Ngarivhume appeared in court on July 22, facing charges for planning to incite public violence. He was arrested on July 20, tied to tweets deemed provocative by the state. He remains in state custody at Harare Remand Prison with no possibility of bail. Ngarivhume is accused of organizing anti-government protests  based on tweets such as:

I stepped forward to add my voice to the growing calls for corruption to end and the govt doesn't like- this is the free Zimbabwe. 26 years ago Nelson Madela gave the South African people their freedom and demanded nothing in return. This is our time #31July pic.twitter.com/5D1FsxAf9T

Hopewell Rugoho-Chino’ono was hauled before the courts in handcuffs on July 22 and July 23, after close to a dozen state agents raided his home on July 20 and seized some of his belongs. He was arrested for allegedly planning to incite public unrest based on several tweets. His Twitter account was taken down on the day of his arrest. Hopewell was also denied bail and his case was deferred to August August 7.

Both were arrested in connection with allegations of violating Section 187 (1) (a) as read with Section 37 (1) (a) (i) of the Criminal Law (Codification and Reform) Act, Chapter 9:23, “incitement to participate in public violence,” and both face up to 10 years in jail if convicted.

As we feared both Jacob & Hope will spend a further night in prison after they were both respectively remanded overnight in custody. In Hope s case court adjourned due to Mnangagwa s curfew rules . In Jacob s case the court said it will now hand down its ruling tomorrow #Shame pic.twitter.com/xxRoijp3W8

On July 22, President Emmerson Mnangagwa declared a curfew and a raft of other measures curtailing people’s movement, purportedly to stem the spread of COVID-19 infections in the country. Activists charge that this move was clearly aimed at stopping planned anti-government protests on July 31.

Due to the curfew, courts close early.

Lawyer Doug Coltart tweeted that the courts deemed Ngarvihume a “danger to the public” due to COVID-19 restrictions:

Jacob Ngarivhume has been denied bail on the basis that the he is a danger to the public because if he is released he will incite people to break COVID-19 Regulations on #31July.

Hopewell’s bail hearing will continue this afternoon at 2:30 pm.#FreeHopewell #FreeJacob

Reporting on the COVID-19 fund scandal

Chino’ono extensively reported on a corruption scandal involving millions of dollars worth of COVID-19 funds meant to benefit Zimbabweans.

The procurement scandal led to the sacking of former health and child welfare minister, Obadiah Moyo, who awarded contracts at inflated prices for personal protective equipment (PPE) and medicine worth over $60 million United States dollars.

Following the corruption exposé, Chino'ono used social media — primarily Twitter — to echo a clarion call for protests next week against corruption. His cameras and computers were seized by police, without any search or arrest warrants. It is unclear who is responsible for removing his Twitter account.

Government spokesman Nick Mangwana expressed the state’s position on the matter in a tweet:

Embassies in Zimbabwe have roundly condemned the arrest of Chino’ono and Jacob Ngarivhume.

Activists Hopewell Chin’ono, @jngarivhume, #MDCTrio, @VOANews’ @FrankChikowore & @263Chat’s @takawirasam answered @edmnangagwa’s call to end corruption. Yet, the govt prosecutes them instead of the culprits. Every dollar lost to corruption is #ADollarStolen from the Zim people. pic.twitter.com/1koJ3d7OmZ

Hopewell and Jacob were arrested for inciting people to remove a constitutionally elected Government on 31 July. If Zimbabwe was America, they would currently be going through torture at Guantanamo Bay. pic.twitter.com/c3QLdDBpzC

The European Union expressed concern at the arrest of Hopewell:

We are concerned by the arrest of @daddyhope this morning and call for his immediate release. Journalism is not a crime, but a crucial pillar of any democratic society & of the fight against corruption. Journalists and freedom of expression deserve protection. #EU4HumanRights pic.twitter.com/m6RIiFI86W

The Canadian mission to Zimbabwe tweeted:

Journalists must be allowed to report facts freely & independently. That is why today's arrest of @daddyhope, and other recent apprehensions of journalists doing their work is so concerning. Media has an important role in defending & advancing truth. #mediafreedom #humanrights pic.twitter.com/83smcJ5E4A

But netizen Chido Matamba had a different view:

Journalists must be objective and stop inciting people. Some Journalists have their hidden agenda of inciting people to remove a constitutuonally elected Gvt.These journalist r being used and are getting paid handsomely to revolt against e Gvt in power.

Zimbabwe on the brink

Zimbabwe is undergoing an unprecedented time of economic decline with inflation hovering above 737 percent and acute food, foreign currency and fuel shortages. A local currency—RTGS dollar— introduced last year, replacing official use of a stable foreign multicurrency system, has rapidly fallen in value against the US dollar.

Bankers, doctors, nurses and other healthcare professionals have joined the call to be paid in US dollars to cushion them from the cost of living and a depreciating local currency, but Mnangagwa’s government will have none of it.

The stock exchange has been closed since June 28, a first in the country’s turbulent history.

As a result, citizens are growing increasingly agitated by economic hardships and the government is concerned about the possibility of mass protests — which could unseat Mnangagwa — as happened to the late former President Robert Mugabe in November 2017.