Serbia protests point to crisis of legitimacy for Vučić government 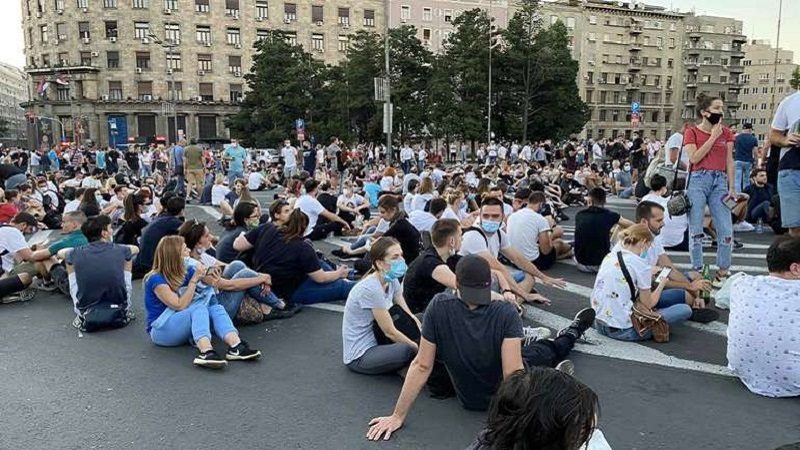 Over the past several years, Belgrade has been the setting for mass protests demanding transparency and accountability from the government led by President Aleksander Vučić of the Serbian Progressive Party (SNS).

Protests against gentrification and non-transparent development such as the initiative Don’t Let Belgrade D(r)own (Ne da(vi)mo Beograd) brought thousands to the streets and made international headlines, while mass movement “1 out of 5 million” marched for weeks on end against corruption and for free and fair elections. Yet none of these mass anti-government protests were touched by state violence—that changed in early July of this year.

On the night of July 6 and for several nights afterward, police broke up protests in front of the national parliament with tear gas, stun grenades and beatings. Witnesses like Goran Sandić, an associate at the Belgrade Centre for Human Rights, saw indiscriminate and disproportionate use of force even blocks away from the parliament—violence that was caught by cellphones in several instances and was widely distributed on Serbian social media.

“We saw with our own eyes and on video that the police attacked people physically,” says Sandić, who attended the second night of protests as an observer. Balkan Investigative Reporting Network (BIRN) mapped numerous incidents of attacks against both protesters and journalists and an umbrella of NGOs has filed complaints with the public prosecutor and ombudsman calling for an investigation into the incidents.

Why did these protests, unlike the waves of mass protests during the years prior, evoke such a violent crackdown from the authorities? Observers point, on the one hand, to the nature of the protest that was initially underestimated as being mainly anti-vaxxers, conspiracy theorists and supporters of the far-right before swelling to thousands of citizens from all different ages and backgrounds.

A vanguard group of protesters surrounded the parliament and were able to enter it before the police began to break up the scene. “The 5th of October [2000, when Slobodan Milošević's regime collapsed] was finished by entering the parliament, so it is very symbolic”, says Zdravko Janković, an activist with Don’t Let Belgrade D(r)own who has attended numerous public protests in the last decade.

On the other hand, though, these protests represent a unique threat to a president voted in by a minority, plagued by accusations of corruption, and presiding over an unfolding public health and economic emergency. As Sandić notes, “This is literally a life or death situation.”

False reporting of the COVID-19 numbers

After months of a strict nationwide lockdown, President Vučić announced that the country had successfully contained the pandemic and enacted a loosening of measures in late May, coinciding with the run-up to rescheduled parliamentary elections.

OSCE's election observatory body commented on the campaign, “A notable aspect was the meshing of the SNS’s campaign with media coverage of the president and the government’s response to the COVID-19 crisis.” The ruling party received considerably more media coverage than any other and benefited from having their supposedly successful combating of COVID-19 repeated by all major media channels. Meanwhile, normal life resumed in some measure, and Belgrade even hosted Europe's first football derby since the lockdown, with 25,000 fans in attendance.

This made it all the more jarring when Vučić announced, a mere two weeks after highly contested elections that were boycotted by close to 50 percent of the electorate that the country would head back into a strict lockdown. This gave the impression that the lifting of the sanctions had been a political move to enable elections.

In the meantime, new information started to cast significant doubts about the government’s rush to reopen the country. An investigation by BIRN showed that authorities significantly under-reported the number of deaths from COVID-19, according to information from the government’s own database. It appeared that “they had one report for the government and one report for the public,” says Janković. Numbers on international tracking sites like the World Health Organization still reflect the government's numbers—they list a total of 491 deaths as of July 24 for Serbia, whereas the data reported by BIRN showed 632 death as of June 1.

Despite denials by the government and accusations of fake news, the report apparently managed to reach a large number of people, who felt that the government had manipulated them for political ends. “The real journalism has found its way to crawl up in the pile of rubbish journalism,” adds Sandić.

The presence of right-wingers as well as hooligans at the protests on July 6 and the days following is indisputable, but the government's claims that the protests were dominated by such forces, or even foreign agitators, are highly suspect. Attendees and observers, as well as video footage, show a wide range of protesters from all walks of life.

“I was there to monitor and what I could see … the demographics of the protest were such that there were older people, younger people, middle-aged people with children, etc., but from the moment where the clashes started it was mostly young males, dressed in black who started provoking the police,” says Sandić. “What is clear is that there was an attribution of the scenes of violence to all citizens in the protest instead of to hooligans.”

‘The only opposition is reality’

Despite attempts by Vučić and some in the media to cast the protests as the work of anti-science conspiracy theorists and people angry exclusively (and irrationally) about lockdown measures, the scenes of police brutality and tear-gassing of journalists that were widely broadcast both on public and social media have jolted Serbian society, and apparently deeply threatened the government's ability to control the narrative about the pandemic.

The doubts over the official coronavirus numbers have reached members of the medical community, a large group of which has called for the resignation of the government task force and an investigation into possible concealment efforts by the regime. A planned reintroduction of a curfew was revoked. Suspicions over the legitimacy of the elections and the presence of irregularities continue to dog the SNS, even as they dominate the parliament with a super-majority. And long-standing suspicions of the party's connections to organized crime were re-awakened by a report by investigative outlet KRIK that caught the president's son watching the Belgrade derby together with a “football hooligan” who has suspected ties to a Montenegrin crime klan.

The continuous drip of bad news for this government undermines their ability to gain public cooperation at a moment when the country faces an unprecedented double threat of an out-of-control pandemic and roiling economic turmoil. “They are facing a problem of their legitimacy—which is quite complicated at this stage of the pandemic in Serbia,” notes Janković. The link between trust in the government and the ability to impose measures to combat these threats has been observed in other countries like the United States, but coming on top of years of anger and despair over corruption as in Serbia, it amounts to a potentially dangerous situation, particularly if the government continues to show itself unwilling to address the mounting accusations levied against it by outraged members of the public.

For observers like Sandić, the concern that the government will fight hard to maintain its grip over authority is as much a concern as the ongoing threat from COVID-19. “I am afraid that the spark that will light up the fire of change could end up in deaths, and that would be the worst scenario.”

The violence and lack of accountability bared openly for the nation to witness during July's protests after years of restraint suggest these fears may not be unfounded.