Georgians "rallied around the flag" during the pandemic 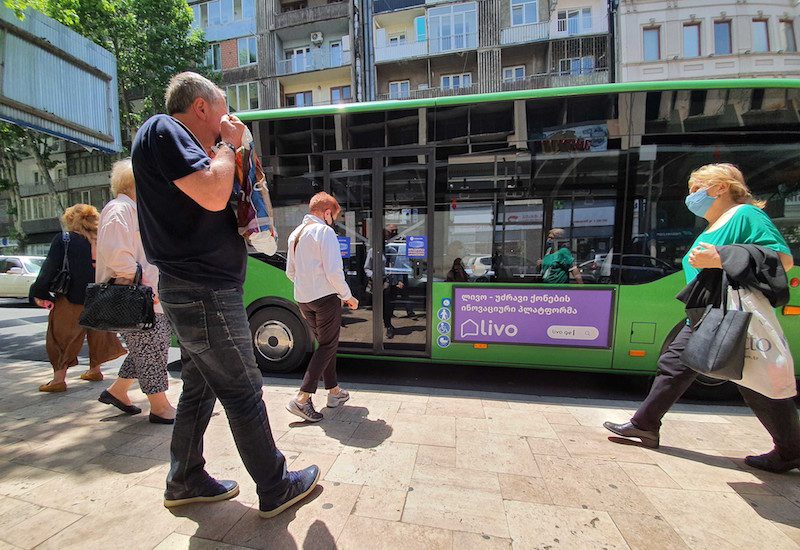 A new survey of public opinion in Georgia during the COVID-19 pandemic has revealed widespread support for the authorities’ response to the crisis.

When COVID-19 reached Georgia, there was initially some doubt as to how well the South Caucasus country could contain the lethal virus. The country registered its first case, a man who had returned from badly hit Iran, on February 26. Shortly afterwards, on March 11, the World Health Organisation (WHO) officially declared a pandemic. Over subsequent weeks, the Georgian authorities imposed a curfew, locked down the country's four largest cities, and instituted strict entry restrictions.

This strict response has since been widely praised for its effectiveness, as have the three doctors behind it. Georgia was the only former Soviet republic of 15 countries to which the EU opened its borders on July 1. According to the Georgian government's official COVID-19 portal, StopCov.ge, the country has recorded 1,085 COVID-19 cases, including 16 deaths. Its neighbours Armenia and Azerbaijan have fared much more poorly, with 36,162 and 28,980 cases respectively according to the Johns Hopkins University Map.

Tbilisi's response appears to have won plaudits from ordinary Georgians, too. The new survey, published today, was conducted by the Caucasus Research Resource Centres (CRRC) with support from the Dutch Embassy in Tbilisi. Its findings are based on six periods of data collection between April 29 and June 6, at the height of Georgia's epidemic. These featured interviews with over 6,200 people from all regions of the country under the government's control.

Importantly, the survey indicates that the vast majority of the Georgian public approve of the measures implemented by the government during the crisis. Some of these, such as wearing masks in closed areas or enforcing night-time curfews, were supported by 94 and 83 percent of respondents respectively.

Despite their support for these measures, most respondents nevertheless favoured reopening the economy rather than waiting any longer for the crisis to abate before doing so. In a country where the average monthly salary is around US$300 and there is scant to no social welfare, it is perhaps not surprising that many Georgians appear to fear deeper poverty at least as much as the pandemic. The least supported policies, though supported by the majority, appeared to be those posing an immediate and direct economic loss — such as restricting sales of certain products online and increasing fines for violating emergency rules. An exception to this trend was the negative attitude towards reopening the country to international tourists, a prospect supported by only 37 percent of respondents.

The risk of impoverishment is palpable: the share of households reporting no income whatsoever increased from around one percent before the crisis to around 13 percent during it. Approximately half of the employed population lost a job, half of which eventually returned to work by early June. Meanwhile, consumer sentiment remains low and few Georgians suggest that they would return to shopping and socialising in bars and cafes even after the restrictions have been lifted — with potentially significant repercussions for the service sector and economic recovery.

The authors of the survey note that Georgian society appears to have “rallied around the flag” during the pandemic, expressing markedly positive views of the actions of public institutions and figures.

Heated debate erupted over the Georgian Orthodox Church, which was accused of defying the government's social distancing measures when it continued to hold communal worship. Just four percent of Georgia's Orthodox Christians stated that they attended the Easter liturgy this year, down from 44 percent the previous year. Only a third of respondents stated that they approved of the church continuing to serve communion wine from a shared spoon during the pandemic, a longstanding tradition which clerics strongly defended. While Georgians may have heeded the government's advice over their priests’, these incidents did not have any statistically significant impact on public approval of the church, which remains one of the country's most trusted institutions in this Orthodox Christian-majority country.

Read more: Has COVID-19 provoked a crisis of faith in Georgia's Orthodox church?

The most remarkable change was noted in the approval of the performance of Georgia's Prime Minister Georgi Gakharia, which rose from 21 percent in November-December 2019 to 65 percent during the survey period.

Before COVID-19 struck, the political scene in Tbilisi was turbulent even by Georgian standards. Last year saw thousands of young people from opposition parties and grassroots protest movements alike take to the streets to air a number of grievances. They castigated the government for the failures of its drugs policy and demanded a stop to reforms of the electoral system, which they feared would disproportionately benefit the ruling Georgian Dream party. When the Russian MP Sergey Gavrilov addressed the Georgian parliament on June 20, a wave of protests broke out to which police responded with rubber bullets. As a result, 18-year-old Mako Gomuri lost an eye; eyepatches became a symbol of the protest movement.

One figure who has drawn the protesters’ ire has been the billionaire Bidzina Ivanishvili, former chairman of Georgian Dream who is widely regarded as the most powerful man in Georgia today. Yet a majority (53 percent) of respondents stated that it was acceptable for strong leaders to control the government in times of crisis provided that they were effective. This appears to form part of an inconsistent public stance towards democracy as an abstract ideal — the percentage of respondents stating that democracy was the ideal form of government increased from 49 in November-December 2019 to 60 during the pandemic period.

Although the majority of Georgians approved of and abided by measures to safeguard public health, the survey also reveals a substantial presence of mis-  and disinformation within Georgian public life. For example, nine percent of respondents believe that COVID-19 is related to 5G mobile infrastructure and over 40 percent believe that the virus was deliberately created in a laboratory. These stances conceivably influence attitudes towards vaccination, openDemocracy has reported based on the same survey.

Georgians may credit their leaders, institutions, and particularly their healthcare system, with saving them from the worst outcomes of the COVID-19 pandemic. But it is hard to say whether they will remain as well disposed towards their rulers once normality — of a sort — returns. These opinions are not trivial in light of the fact that Georgia holds parliamentary elections in October.

CRRC's Research Director Dustin Gilbreath told GlobalVoices that the goodwill earnt during the COVID-19 crisis could provide the ailing Georgian Dream party with a boost at the polls in autumn:

The level of trust and performance assessments, both specifically about COVID-19 and generally, surged during the crisis. The data shows that even what had been largely unpopular institutions like Parliament experienced large gains. The electoral implications are clear — Georgian Dream, as a party, will benefit from the government’s COVID-19 response. While there is still a race for the elections and no one knows what the new parliament will look like, the response likely changed the opinions of many who had been upset with the government about the many scandals of 2019.

However, that will depend on the appearance of a second wave of the virus, which only 27 percent of the Georgian public anticipates. In any case, a lot can change in three months — from infection rates to public moods.