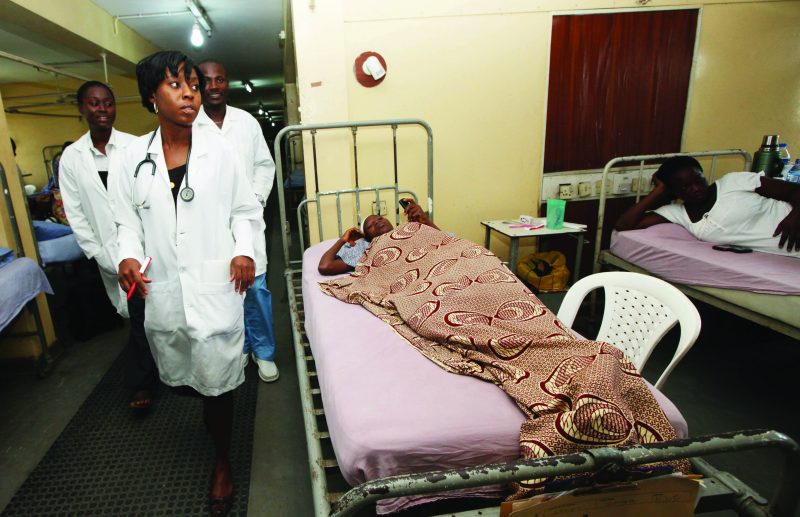 Doctors walk past women with lying in a ward of the Lagos Island Maternity Hospital in Lagos, Nigeria, via Flickr photo by Sunday Alamba/Commonwealth Secretariat / CC BY-NC 2.0.

Doctors in Lagos State embarked on a three-day strike from July 13 to 15, to protest the absence of adequate safety and welfare measures for doctors working with COVID-19 patients.

The Premium Times online newspaper reported that Oluwajimi Sodipo, head of the Lagos Doctors Guild, announced the strike at a press briefing on July 12, in protest of the disparity between COVID-19 hazard allowances for Lagos doctors and their colleagues in federal hospitals.

An unending cycle of rinse and repeat

Strike action by Nigerian medical doctors has become an annual occurrence in Africa’s most populous country. Their grievances are always the same: a demand for increased welfare measures and protection in order to do their jobs better.

The sequencing of the government's response is equally predictable: initially, it’s high -handed, with a threat to sack the striking doctors if they don’t return to work. Then it usually backfires, forcing the government to back down and concede to the doctors’ demands.

This pattern of events has remained consistent even in the face of a global public health crisis.

In mid-2014, Nigerian resident doctors (those undergoing specialist training) went on strike during the Ebola epidemic over welfare demands. The Nigerian government responded by terminating their appointments, then later soft-pedaled and blamed the media for misrepresenting the facts of the matter.

Nigerian Resident doctors @nard_nigeria are starting their strike today,after weeks of trying to get the government to act

Support them ,put your tweets where your mouths are

They are the lifeblood of our hospitals , especially for specialised services.

Before you remind doctors to take quaker oat for breakfast, just remember that the newspaper allowance for the lawmakers is 1.2 million naira & Hardship Allowance is 1.24 million naira.

But a doctor’s hazard allowance with covid19, HIV, Hepatitis B etc is 5,000 naira only? Wawu

True to form, the government threatened yet again to sack the doctors when negotiations ended in a deadlock on June 17. But the doctors resisted the intimidation and stood their ground. The strike was eventually called off on June 22, following the intervention of state governors and federal legislators.

Controversy over funding for COVID-19 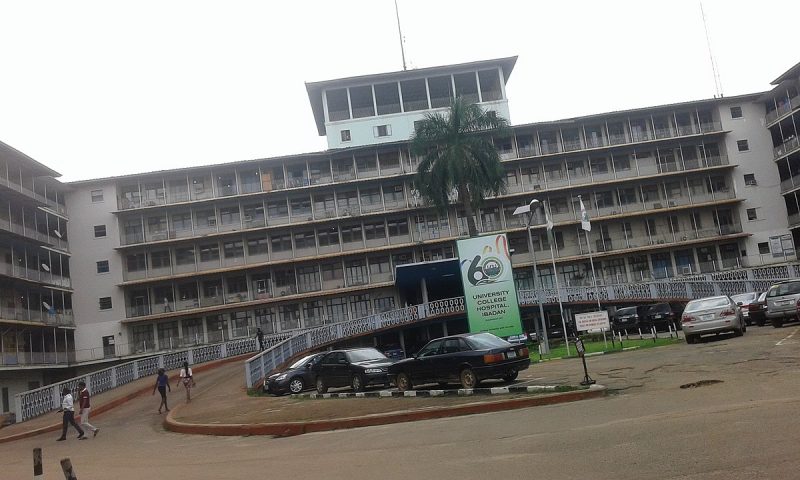 During Nigeria’s COVID-19 crisis, some government funds, allegedly given to a teaching hospital in southwestern Nigeria, became an object of controversy. What started as a routine press briefing about the matter quickly degenerated into denials and counter-accusations.

On June 23, Akinola Ojo, health commissioner in Oyo State, southwestern Nigeria, announced that the state government had spent 2.7 billion naira ($6.9 million USD) in their fight against COVID-19. According to the financial daily BusinessDay, Ojo stated that part of the expenditure included the 118 million naira ($304,000 USD) “given” to the University College Hospital (UCH), Ibadan “as support.”

This suggestion was “emphatically and categorically” rejected by the College of Medicine’s management, which stated that it had not received any such funding from the state government.

On June 24, the Oyo State government insisted that the funding in question had gone to UCH’s virology department, and described attempts by UCH management to “disown” its own clinical virology department that also provides “teaching and research” services to the College of Medicine as “self-serving, artificial and contemptuous.”

The following day, the media office of the governor of Oyo State tweeted a screenshot of a press release in which the head of UCH’s Department of Virology acknowledged receiving financial support from the state government for the fight against COVID-19.

A tale of two testing labs

The controversy stems partly from the fact that there are two laboratories approved by the Nigerian Centre for Disease Control (NCDC) to conduct coronavirus tests in Ibadan, Oyo State: the laboratory of UCH’s Virology department, accredited on March 28, and the College of Medicine’s Biorepository and Clinical Virology laboratory, approved on June 9.

Both laboratories are based in the same facility.

The Biorepository laboratory was commissioned on April 17. This molecular pathology lab was initially conceived as a tissue bank, and its foray into the coronavirus testing appeared to signal internal wrangling — possibly a battle for supremacy between the College, UCH and its virology unit.

It has since been confirmed that UCH’s virology department was the recipient of the state government funding but the entire process lacked transparency.

The fact that UCH management and the College “disowned” the virology department suggests that they were not privy to the funding.

Why did the virology department act independently? Into which department’s bank account was the said donation from the state government deposited? We may not have heard the last on this controversial donation.

In the final analysis, scenarios such as doctors’ strikes and funding debacles are bound to recur until the root cause of the problem — inadequate funding —is exorcised from Nigeria's public health system.

It is untenable that doctors and healthcare workers on the frontline of a pandemic should be paid peanuts while politicians who risk little or nothing earn fat allowances.

Same people that cut the healthcare budget in the middle of a pandemic, and are threatening to sack doctors for going on a strike?

Nigerian politicians are unrepentant money embezzling thieves and not even a public health crisis can change them. Know this and know peace. https://t.co/Xlho01UOLV

Also indefensible is the fact that some public hospital administrators seem uninterested in serving the common good, choosing instead to engage in petty rivalries, to the detriment of the health of their patients.

Until something gives, ordinary Nigerians are left at the mercy of a ravaging pandemic.