Out of work, out of options: Myanmar migrant workers in Thailand scrape by during COVID-19 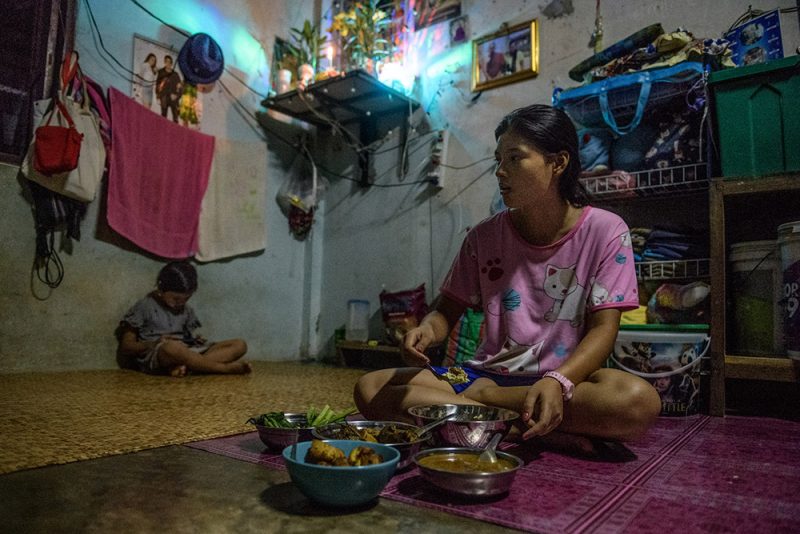 A Myanmar migrant worker who lost her job at a sewing factory due to the coronavirus outbreak, leaving her without  any income to pay for daily expenses or support her child and family. Mae Sot, Tak, Thailand, May 2020. Photo and caption by Jittrapon Kaicome/The Irrawaddy

This article by Jittrapon Kaicome is from The Irrawaddy, an independent news website in Myanmar, edited and republished on Global Voices as part of a content-sharing agreement.

READ: As of September 2018 there are over 2.2 million people Myanmar workers officially registered in Thailand.

With the decline in the Thai and worldwide economy, businesses and factories have closed and migrant workers have been among the first people laid off. As Thailand has entered the worst economic recession in its history, migrants who normally work for daily wages are facing tough times.

After Thailand announced an Emergency Decree to control the outbreak of COVID-19 in late March, the country closed its borders, leaving millions of migrant workers stranded in the country. Some workers were later able to head back across into Myanmar but many are still in Thailand, trapped without jobs and few options to help them get by. Myanmar migrant workers in northern Thailand are among them. 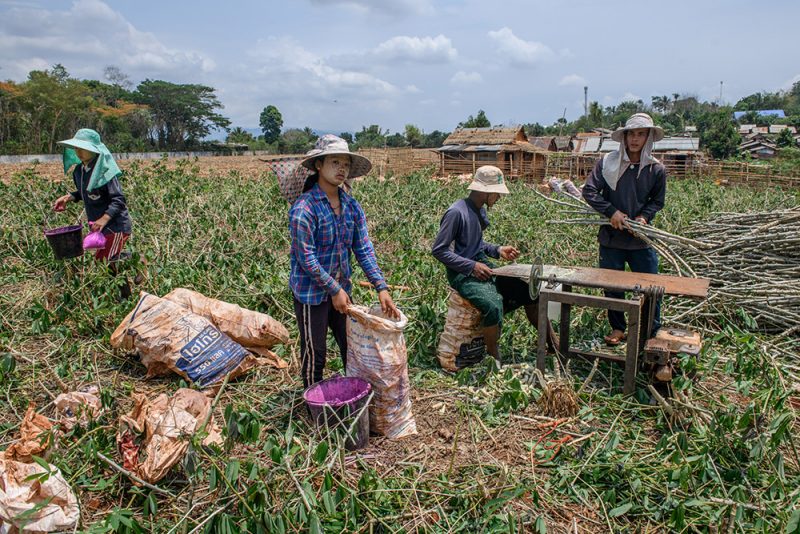 Myanmar migrant workers along the border collect cassava, one of the few things they can do to earn income after losing their jobs in February due to the coronavirus outbreak. Phop Phra, Tak, Thailand, May 2020. Photo and caption by Jittrapon Kaicome/The Irrawaddy

These workers are also faced with the challenge of overcoming local language barriers. Many lack the technical and computer skills to access useful information and guidance or support. They have limited rights to access government social welfare schemes, including those intended to help people through the coronavirus crisis. Their lives hang on uncertainties.

Along the Thailand-Myanmar border in Tak Province, villages went into lockdown and the crisis forced migrant workers from Myanmar to abandon their farms, becoming largely dependent on food handouts. They said the amount of rice handed out wasn’t enough to feed them, lasting only around three days.

The villagers have come to buy sacks of rice on credit five times already, and it will take at least a year for them to pay back the installments. 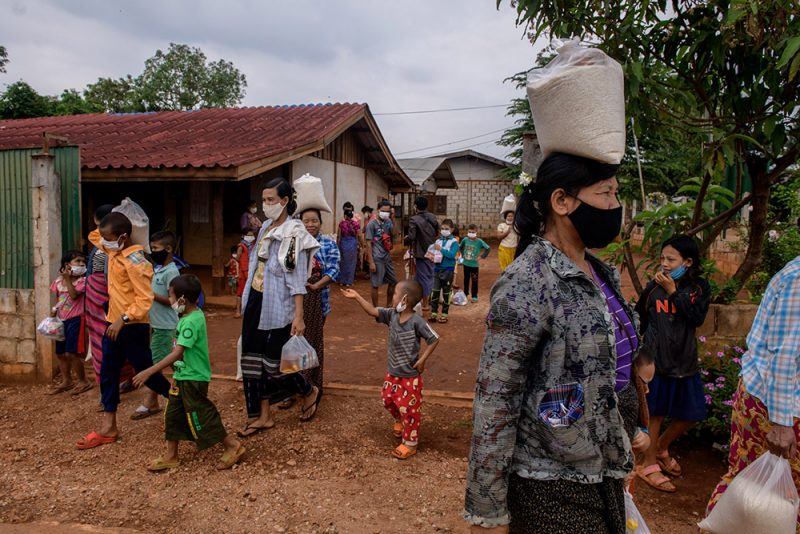 Myanmar migrants in a village along the Thai-Myanmar border have been affected by the lockdown over COVID-19 and receive food handouts. Phop Phra, Tak, Thailand, May 2020. Photo and caption by Jittrapon Kaicome/The Irrawaddy

In the city of Chiang Mai (located northeast of Thailand) during lockdown, it became a common sight to see people, a mixture of local people and migrant workers, lining up for food handouts.

A visit to one of the construction camps in Chiang Mai showed that business closures have forced the wives of construction workers out of their jobs as housekeepers at hotels, while only a few of their husbands have been hired. Some families have less than 1,000 baht left (US$32.08), but they still have to bear the burden of expenses and debts. 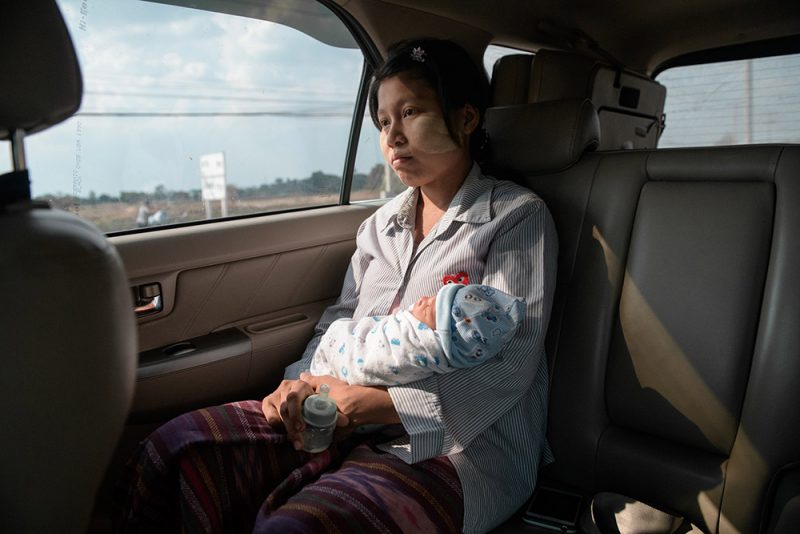 Ma Su Lwin is a Burmese migrant worker who gave birth during the coronavirus outbreak in Thailand. She lost her job at a factory after it closed, leaving her without money to pay for her childbirth or to raise a newborn baby. Mae Sot, Thailand, May 2020. Photo and caption by Jittrapon Kaicome/The Irrawaddy

Kham Kheng Wong-Ong, 27 years old, is a Shan migrant (from Myanmar) working as a housekeeper in Chiang Mai. Speaking in tears, she said:

Since my workplace was closed, I don’t have much money left, I don’t know where to find work. I live in a construction camp with my 4-year-old son. My husband is a daily wage construction worker. We don’t even know when he will be laid off. We have to bear the burden of all the expenses such as electricity, school fees, food and also medicine. 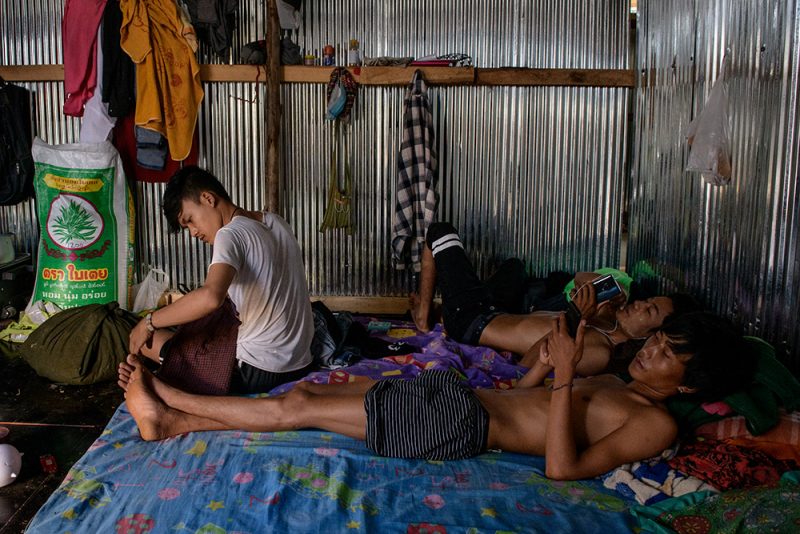 Migrant workers at this construction camp work for a Chinese company but their pay has been docked and is always late. They don’t want to make any claims against their employer because they are afraid they will get fired. If they are thrown out of the job, they won’t be able to find other work and won’t be able to return home because borders are closed due to the coronavirus outbreak. Chiang Mai, Thailand, March 2020. Photo and caption by Jittrapon Kaicome/The Irrawaddy

By July, restrictions on businesses were lifted and most businesses reopened. But with the economic collapse brought by the coronavirus crisis, businesses are still unable to hire back many of their workers. Hundreds of thousands of migrant workers in the country—if not more—are still unemployed and many are unable to adapt to the economy’s “new normal.” 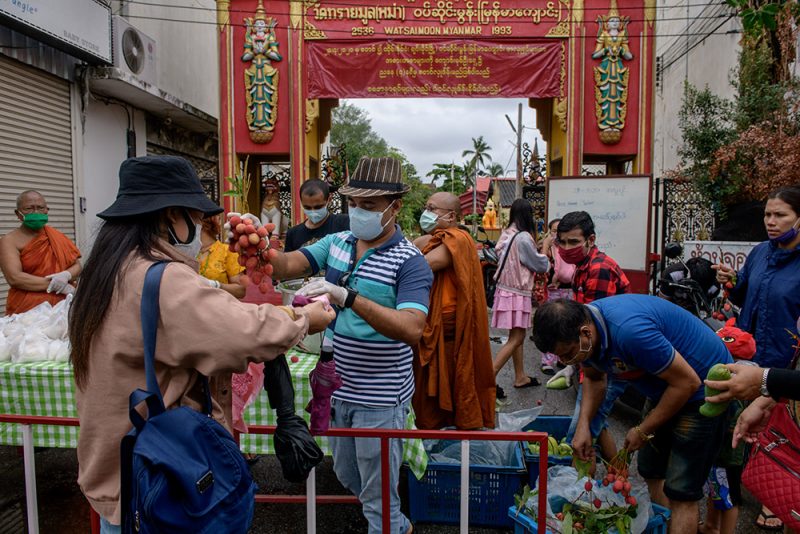