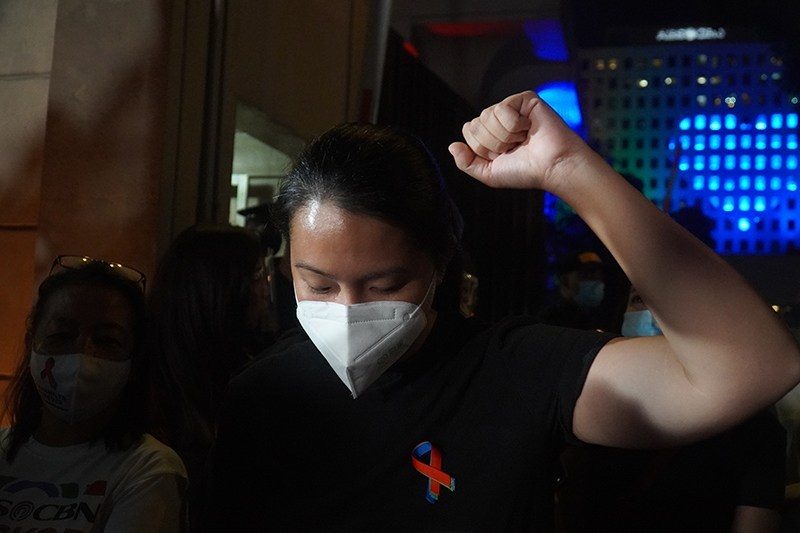 An ABS-CBN worker raises her fist during a protest condemning the non-renewal of the network's franchise. Photo from the National Union of Journalists of the Philippines, used with permission.

This article by Raymund B. Villanueva is from Kodao, an independent news site in the Philippines, and is republished on Global Voices as part of a content-sharing agreement. With research by Jo Maline D. Mamangun.

For additional context, read the statement of journalists condemning the Congress decision to reject the franchise renewal bid of ABS-CBN. The closure of the media network reflects the decline of press freedom under the government of President Rodrigo Duterte.

Like Montesa, hundreds of other workers had to inform their families that their worst fears as workers of the Philippines’ biggest media network had come true. Throughout the day, tears flowed in the many offices inside the ABS-CBN compound as unit heads delivered the sad news to their colleagues.

Montesa blamed the 70 legislators who voted to deny the Philippines’ media network a new franchise to continue operating last July 10. He added:

In my nearly five years in the network, I never thought I would say this to my family. They not only took away our jobs. Our dreams and future, these are the things they took away from us. I’ve worked so hard for this. I did not get it easily. But it’s gone in an instant. You are inhumane!

It is not only ordinary employees like Montesa who are being given their dismissal slips. Even those who have been on millions of television screens for decades and expected to survive the bloodbath of jobs have been retrenched. Award-winning broadcast journalist and news presenter Ces Oreña-Drilon tweeted:

This was one of the toughest days I had to face. Telling fellow kapamilyas that they would lose their jobs by end of August. I lost mine too. https://t.co/s19MXXvjvy

Thousands more are expected to be dismissed until August as the company scrambles to stop the financial hemorrhage it had been suffering since the Philippine government issued a cease and desist order on ABS-CBN’s operations. The network is reported to be losing around 30 million pesos (600,000 US dollars) a day since May 5 but with its franchise denied by Congress, it could no longer keep all of its more than 11,000 workers. “We should consider ourselves lucky if 50% of us are retained until the end of the year,” a source told Kodao.

Radio channel MOR 101.9 DJ Czarina “DJ Chacha” Balba said it is not only at the network’s corporate headquarters in Quezon City that the retrenchment is ongoing.

There are many MOR radio stations in the entire Philippines. It is not only here in Manila that colleagues are losing jobs. Yesterday, our bosses informed us the MOR network only has until August 31.

Balba revealed this is her first job after college and she considers it her “first and forever love.” She said it is not all about her salary but the despair of leaving what she considers her home in the past 12 years. She added:

On top of that, you would no longer be working with your friends nor would you be allowed to visit them because it is prohibited (because of the pandemic).

The loss of income is harder for most employees, on top of the bleak prospects of finding new employment while the coronavirus pandemic rages worldwide. An ABS-CBN employee told Kodao she is now watching YouTube videos on soap-making, thinking of joining the online selling community once retrenched. Upon learning of Congress’ rejection of ABS-CBN’s franchise, employee Jonathan Samson announced he is selling his beloved collection of scooters. Broadcast journalist Adrian Ayalin is not among those dismissed this week, but it does not insulate him from uncertainty and the pain. He wrote on Facebook:

Friends if there are communication-related job opportunities you know of, please (message) me. My Kapamilyas who were retrenched are in need of jobs right now and it is really difficult for them to look for new work in this time of pandemic. And who knows, I and my other colleagues might be next. So we need as many job opportunities as possible.

I admit I voted for President Duterte, along with our colleagues from the RNG (regional network group). We thought our lives would be better if we voted for him. We never thought he would do this to those who supported him.

Is this what we get for voting for him? Killing our jobs? Making our families go hungry? We will no longer be able to help our relatives, siblings and parents. This is beyond painful.

In a speech before soldiers in Jolo, Sulu last week, Duterte admitted wanting the network closed. But even before the network’s franchise bid was formally rejected, Duterte’s close ally Senator Ronald dela Rosa had already warned that ABS-CBN employees should start looking for other jobs.

The shock of losing jobs and the shutdown of their company prodded employees to react in various ways. Balba asked:

Other departments will stop operations. So, pray for the other employees who will be jobless like us.

Oreña-Drilon for her part stayed hopeful:

Babangon din ang mga #kapamilya. (We will rise up.) This may be our darkest hour. But don’t lose hope.

Many, like Montesa, however, have held nightly noise barrages at ABS-CBN’s Sgt. Esguerra gate since July 13, heavily filling the air with the banging of gongs, clanging of makeshift noisemakers and sounding horns of cars driving around the network compound in a two-hour motorcade. Enraged, they vow to make those responsible for their uncertain future pay.

I am Family Forever. You are not forever. History will make you pay.