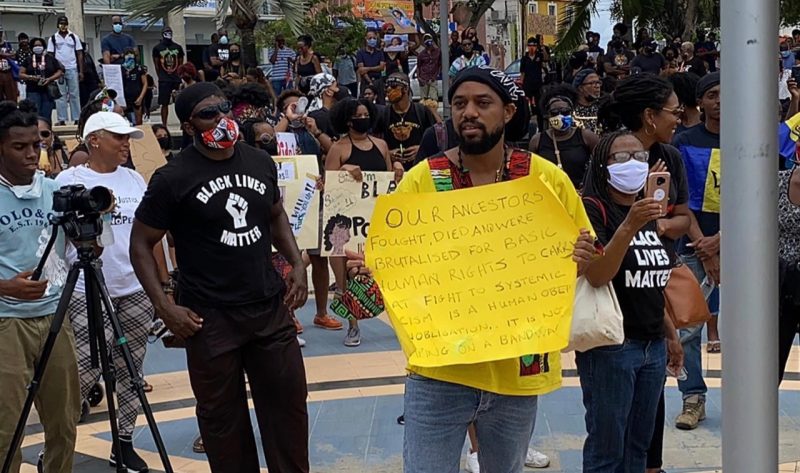 The killing of yet another African-American man, George Floyd, at the hands of a white police officer in Minneapolis, Minnesota has triggered intense backlash worldwide.

Far beyond America, protests exploded with the voices of those who had finally had enough, including the citizens of Barbados — an island still struggling with stark racial disparities rooted in its deeply-ingrained colonial history.

Since the abolition of slavery across the British colonies in 1843, and independence from Great Britain in 1966, Barbados’ black majority has made undeniable progress economically, socially, and politically; however, during a study on white identity in the Caribbean some white Barbadians asserted that there is no such thing as white privilege.

Despite this perception, the country's racial tensions have continued to fester, and in light of the international attention surrounding George Floyd's murder, can no longer be ignored.

Social media in Barbados has become a crucial tool used by black Barbadians to speak out against the systemic and interpersonal racism that many attest have stained their psyche. Hashtags such as #ScreenshotARacist, #DoTheWork, #BlacketyBlackBlackBlack, and #SupportBlackBusiness all encapsulate the collective rallying cry of black Barbadians who are boldly speaking out against racial inequity.

Apart from the 1937 Barbados Riots, which some pan-Africanists argue should be referred to as the “People’s Uprising”, the country has seen little political and social unrest.

However, these riots were pivotal: spurred by the deportation of Clement Payne, well regarded by black Barbadians as a labour leader who championed the formation of trade unions, the riots contributed to reform that would eventually lead to independence in 1966.

In “Crisis of an Intellectual Tradition”, Professor Ian Boxhill posits that, as a result of being colonised solely by the British and having a relatively passive black populace, “countries like Barbados […] did not have enough turmoil in them […] They seemed too consensual oriented or just plain too quiet” — and in an article on race relations in Barbados, retired educator Ralph Jemmott suggested that “the black educated middle class, by and large, tends to stay away from mass civic engagement on issues of race”.

This perception of Barbadians of colour upholding the status quo — despite the social and economic inequalities perpetuated by systemic racism — is a notion that has been eloquently dispelled by many, including activist Luci Hammans during the Black Lives Matter march in the capital, Bridgetown, on June 13, in which she proclaimed:

As we marched today, we took steps of resilience, because to protest in Barbados needs permission and requests […] the Public Order Act was created to stop Black Power protests in Barbados, and to appease the political and economic elite in 1937, because we were not passive then and we are not passive now!

Many black Barbadians have experienced first-hand the emotional ravages of interpersonal racism. Systemic racism, however, represents another level of pain and rejection, manifested by societal institutions that perpetuate racial injustice despite being established to serve all citizens.

Characterised by the rules, codes and practices — both covert and overt — that create advantages and disadvantages based solely on race, systemic racism amplifies the challenges that people of colour experience. In Barbados, this is glaringly obvious when it comes to education, healthcare, social mobility, and crucially, intergenerational acquisition of wealth.

While some social media users contributed to a resource list advising “ALL white or ‘pass-fuh-white’ Bajans, and other white people living in Barbados” how to be anti-racist, several white Barbadians took to social media to assert that black Barbadians were jumping on a bandwagon in the form of the Black Lives Matter movement, and that the American brand of racism had nothing to do with Barbados.

It is quite fascinating to see white/white adjacent Bajans and those seeking the shelter of their privilege try to convince themselves and us that the real reason there is racism in Barbados is because “the blacks” just won’t play nice with them and simply ignore the things they say.
Apparently racism was well on its way to being solved in Barbados until upstart activists—influenced by America and her completely unrelated racism of course—started “bullying” good, kind, decent people who “don’t see colour” and whose magically lily white circle of close friends was just a matter of happenstance.
I swear this is PhD level gaslighting.

At the same time, however, many younger white Barbadians lent their support to the Black Lives Matter march in Bridgetown.

Younger black Barbadians — educated, conscious, articulate and impassioned — did not respond with the passivity so often ascribed to previous generations. Instead, they galvanised their voices to express their sense of injustice, and began a deeply insightful and potent level of digital activism.

Just as importantly, there were calls for the black community to recognise the power it has to influence the local economy. In response to suggestions that pledging to support black-owned businesses for a day in a show of solidarity was tantamount to promoting hatred of whites, Facebook user Shaka Mayers quipped:

Barbadian activists also took part in the international Blackout Day on July 7, and used Facebook to shine a spotlight on black-owned businesses as they pledged to “use economic power to fight racial injustice and economic disparity”.

In response, some businesses notorious for valuing the tourist dollar over local spend suddenly seemed to recognise the economic sway of the black Barbadian majority, and quickly back-pedalled in an attempt to retain customers. One such establishment, which made an attempt to overhaul its social media image, swiftly met with a stunning digital rebuke — highlighting the fact that black Barbadian activists are not easily swayed by empty promises, and remain committed to the cause of dismantling systemic racism.

Their message is clear: no longer will they tacitly accept the status quo — the unravelling of the racist tapestry of Barbadian society has begun, and it will not stop until they have woven a new reality of equality and equity for all Barbadians.