‘Invisible hands': How millions of domestic workers fare under COVID-19 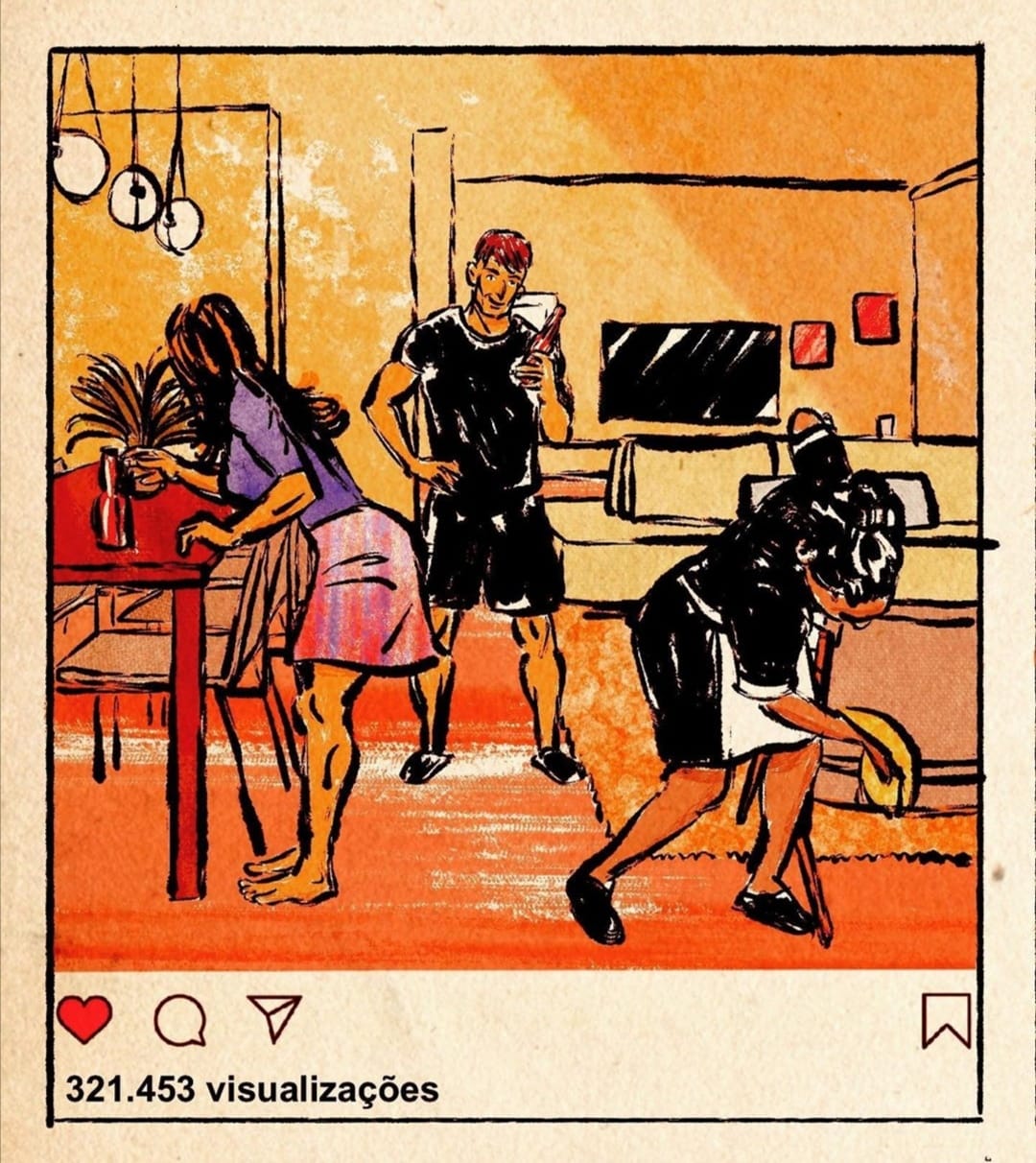 Part of a 9-post illustration series on Instagram, by Brazilian artists Leandro Assis and Triscila Oliveira. Used with permission.

According to the International Labor Organization (ILO), there are 67 million domestic workers around the world — 80 percent are women. Domestic work takes place in the private sphere and is often invisible.

Workers clean, cook, take care of children or elderly family members, often without a contract or with poor legal protection. Despite being “at the frontlines” of COVID-19, they are rarely part of COVID-19 response plans.

During the pandemic and under confinement measures to stop the spread of COVID-19, how are female domestic workers faring around the world?

No pay for domestic workers in Argentina, Afghanistan and Indonesia

Most domestic work is informal, leaving workers vulnerable, especially in times of crisis like COVID-19.

In Argentina, which has spent more than 100 days in lockdown, about 70 percent of domestic workers are in the informal sector, according to a study by the University of Lanús (UNLa) and the Center for Study and Labor Research.

During ongoing confinement measures, this means that no work equals no payment. However, many women manage to get to their workplaces, despite lacking permission to go out during the quarantine. Only 33 percent of workers protected by a contract received their full salary without going to work since the pandemic began, according to the same study.

Still in Argentina, the lack of legal certainty leaves workers vulnerable and reluctant to complain. For instance, interviewees in the same study fear losing their jobs, getting infected and infecting their families. Also, an increasing number of employers have resorted to legal tricks to make them quit, pay them less, or change their category into “caregivers” so they can be “essential workers”. Overall, the union reported that 70 percent of domestic employees suffered labor abuse during the quarantine.

We are the invisible hands. Our work is not valued.  We don’t exist for the families we serve nor do we exist for the state. With COVID-19 and the lockdown, we were the first to lose our jobs without any compensation or support.

When there are contracts, many of them are unclear and weak. This is the case for Indonesia – which has at least 4.2 million domestic workers. In 2019, the Indonesian National Network for Domestic Worker Advocacy polled 668 domestic workers in seven regions of the country and found that 98.2 percent of the respondents earned only between 20 and 30 percent of Indonesia’s minimum wage.

Sometimes, contracts with large institutions can go wrong, too. For example, in Afghanistan, women who clean the offices of the Ministry of Finance were first allowed to stay at home and continue to be paid. Yet, when the context of COVID-19 worsened, they had to return to work at the risk of losing their salary. As they are the main providers for their families, they returned to the office. Fawzia, a single mom with four children, told Global Voices:

If we keep [ourselves] safe from corona, we will die out of hunger.

Many of the women cleaning, babysitting and cooking for pay around the globe migrated from another country to get the job. For example, there are an estimated 2.1 million migrant domestic workers in the Middle East. The majority are women from Asian and African countries such as Sri Lanka, the Philippines, Bangladesh, Nepal, Indonesia, Kenya and Ethiopia.

Across the Middle East, employees may not be paid at all, and as a result, many female migrant domestic workers are unable to send remittances back home. This not only adds to the emotional and psychological strain suffered by migrant workers, but it also represents a loss of income for their families in their country of origin. In Hong Kong, too, debt levels among the Filipino and Indonesian migrant communities have increased during the pandemic.

The COVID-19 crisis has once again sparked debate around the live-in rule. Not only does it blur the line between work and personal life, but also often involves inadequate accommodation and insufficient food, or lack of privacy and security. A research report conducted in 2016 by the Justice Center in Hong Kong stated that  “66.3 percent of MDWs [Migrant Domestic Workers] surveyed show strong signs of exploitation but do not trigger enough indicators to be counted as being in forced labor.” It is a grey zone.

Though Hong Kong was never under strict lockdown, the government repeatedly and publicly asked domestic workers to stay at home on their rest days during the peak of COVID-19 from January to April. Some workers reported that they were asked to resign if they left the workplace on their rest day. Only in early April did Law Chi-Kwon, Secretary of Labour and Welfare, appeal through his blog to both workers and employers to “exercise mutual understanding on rest day arrangements.”

In the Gulf countries, migration is regulated by the kafala system. Migrant workers’ visas are tied to their employers and they are not allowed to leave or change employers without their employer's permission. If they do, they can be arrested and punished for “absconding” with fines, detention and deportation.

In Brazil, the first COVID-19 victim was a domestic worker

Some domestic workers worry when their employers do not provide them with a mask or hand sanitizer as a mandatory health protocol during the pandemic.

In Rio de Janeiro, the first COVID-19 death was a 63-year-old woman who was a domestic worker. The woman — whose name has been omitted in media coverage at the request of her family — got infected by her employer who had come back from a trip to Italy. The worker was requested to live at the employer’s house during part of the week due to the distance between her home and work. On March 16, she started to feel sick and died the next day.

The most recent Brazilian data collected on domestic work shows that the country had approximately 6.1 million domestic workers in 2016, of whom 92 percent were women and 71 percent were black. Only 4 percent are unionized. There is currently no specific legislation in Brazil that makes domestic work non-essential during the pandemic. Workers can be fired if they do not go to their workplace.

In Ecuador, too, as the economy starts to reopen, more domestic workers are resuming their work and worry about their safety in this transition. The Ministry of Labour requires that employers of private companies ensure that workers are provided with safe transportation and bio-safety measures, such as masks, to protect their health. However, this has not always been the case for domestic workers, who have felt vulnerable to COVID-19 in their commuting and work environments.

The Union’s founder and President, Shirley Pryce, who received the Caribbean Community’s Woman of the Year award in 2017, told Global Voices that, like thousands of other workers in Jamaica’s informal economy, domestic workers live “hand to mouth,” and have suffered more than any other group during the COVID-19 pandemic.

Her union is calling for the government to set up an emergency fund to help domestic workers in such situations.

Pryce stressed major concerns over domestic violence, which has increased during the pandemic due to economic stress, more time spent indoors with spouses and overcrowded living conditions. She told Global Voices:

Domestic workers are the backbone of the society. While the government’s primary focus is to contain the spread of the virus, the risks emerging from shortcomings in labor and social protection, and the impact on the most vulnerable groups in society, have increased and the situation is critical.

In Singapore, where some employers have let go of their domestic workers during the pandemic, the Center for Domestic Employee reminds employers to treat their helpers fairly. Civil society also pressures regional leaders to not neglect domestic and migrant workers who work within Southeast Asia.

In light of these difficulties, an app was launched in Ecuador, which aims to improve the rights and working conditions of domestic workers. It combines information relevant to domestic workers so that they can find it in one place. Through surveys, this app also gathers data regarding the current working conditions of domestic workers — such as salary, overtime payment, and work hours — in order to help users identify any rights violations that might be taking place and guide them through legal actions if necessary.

In Brazil, a series of cartoon comics were shared on Instagram to raise awareness about the lives of domestic workers. They show stories of women who don’t have the option to stay at home and who worry about putting themselves — and the ones around them — at risk.

Domestic workers, developers, artists, unions, and activists throughout the globe work so that the world's “invisible hands” may step out of the shadows, even during a pandemic.