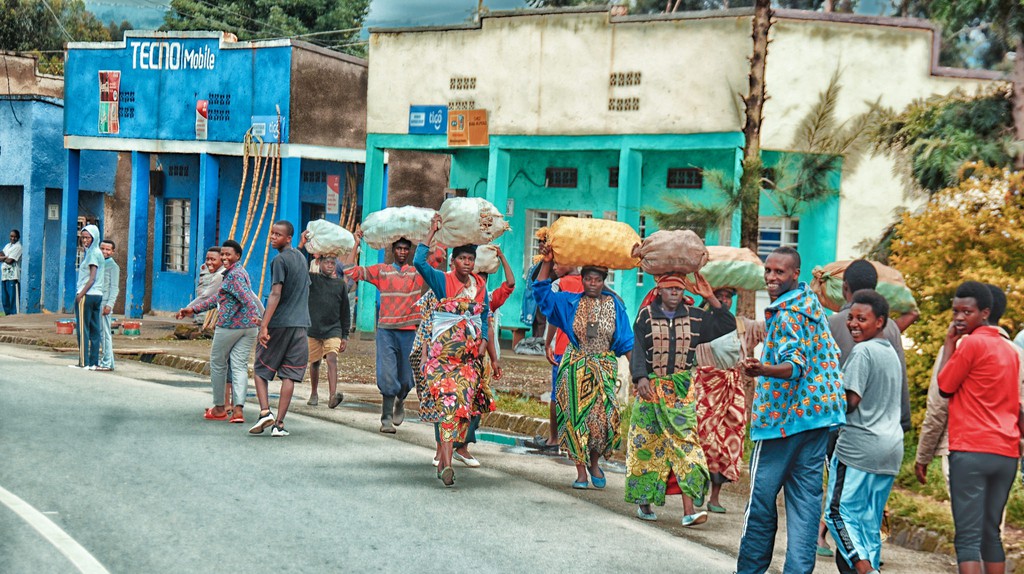 People coming back from a market in Musanze in the Northern Province of Rwanda., September 2017. Photo by Cyril Ndegeya, Used with permission.

The law against genocide ideology and divisionism has had a chilling effect on freedom of expression in Rwanda.

The traumatic memory of the 1994 genocide still hangs over many Rwandans, even those too young to remember it. Up to 1 million Rwandans were killed by Hutu extremists. Most victims were ethnic Tutsis, but some Hutus who refused to kill were also murdered.

Following the genocide, legislation was created to outlaw hate speech and incitement to genocide and divisionism, as part of measures to reconcile Rwandans and prevent a similar tragedy.

In many countries — including Rwanda — debates about how to reconcile competing values of free speech and non-discrimination have stirred for decades. But the rapid rise of the internet has raised new questions about the regulation of hate speech and the limits of freedom of expression online.

In Rwanda, the genocide law is often used to silence dissenting voices.

Laws against ‘genocide ideology’ and ‘divisionism’

In October 2008, the Rwandan government led by the ruling Rwandan Patriotic Front, enacted a law against genocide ideology and divisionism, and other laws to encourage unity and reconciliation among Rwandans.

The laws restricted any speech deemed hateful or promoting ethnic or racial divisions and prohibited political parties from forming based along ethnic lines. These laws are enshrined in the constitution adopted in 2003 and revised in 2015.

The country committed to its fight against genocide ideology in the 2003 constitution, but the concept was not defined or proscribed by Rwandan law until October 2008.

Article 38 of the 2003 constitution enshrines the right to freedom of expression, including freedom of the press and information.

The same article, however, imposes an important limitation on such freedoms. It states that ‘’freedom of speech and freedom of information shall not prejudice public order and good morals, and the propagation of ethnic, regional, racial or discrimination or any form of division shall be punishable by law.’’

Prohibiting hate speech is a legitimate aim, especially given the Rwandan context where the media was much politicized during the period preceding the civil war and genocide.

In practice, the law against genocide ideology threatens freedom of expression both online and offline, prescribing heavy prison sentences of up to seven years in prison and fines for any offender who disseminates content deemed genocide ideology in public spaces — including social media — through documents, speeches, pictures, media and other means.

Rwanda’s hate speech legislation is characterised by broad and vaguely defined provisions that allow authorities to silence critical and dissenting voices when they apply it to journalists, bloggers, activists, and opposition politicians.

During a 2015 testimony before the African Court of Justice, Laurent Munyandilikirwa, a Rwandan human rights activist, pointed out the ambiguities in the law by saying:

Genocide ideology law is a form of intimidation, if you dare to criticize what is not going well in this country, you are tagged as a genocide denier, so citizens and members of the civil society prefer to shut up.

Through this legislation, the government greatly limits the diversity of the information landscape, both online and offline.

Authorities often order editors of online news sites to remove or delete content that is critical of government officials. This trend of shrinking freedom of expression spaces started during the run up to the 2010 presidential election campaign, where legitimate political dissent was conflated with genocide ideology and deemed disruptive to national unity.

This legislation has created an environment of self-censorship for online journalists, bloggers and ordinary users. Fearing reprisal and prosecution, citizens refrain from exercising their constitutional right to freedom of expression.

Take the case of Joseph Nkusi, a Rwandan citizen who lived in Norway from 2009 to 2016. During that time, he produced blog posts known for their sharp criticisms against the administration of President Kagame. When Nkusi was deported to Rwanda after Norway’s Immigration Services rejected his asylum application, he was immediately arrested and prosecuted on trumped-up charges of conspiracy, genocide ideology and incitement against the state, charges motivated by his political views evidenced in his blog. He was convicted and sentenced by the high court of Rwanda to serve 10 years in prison on March 29, 2018.

There are also numerous scenarios in which vague wording of the law is deliberately exploited to stifle public dissent or criticism.

Take, for instance, the case of Victoire Ingabire Umuhoza, an opposition politician who is often harassed and denounced by media close to the regime as espousing “genocide ideology.” Ingabire was arrested in 2010 over a speech in which she discussed “problems with reconciliation and the lack of recognition of Hutu who were killed,” according to Amnesty International. In October 2012, she was sentenced to eight years in jail after she was convicted of “grossly minimizing the genocide” and  “conspiracy to harm the existing authority and the constitutional principles using terrorism, armed violence or any other type of violence.”

Over the past few years, self-censorship among journalists has seriously limited their ability to inform the public. A 2015 report on the state of media freedom in the country noted:

Journalists fear publishing information about authorities and institutions, for diverse reasons, some are afraid of harassment or some of them want to avoid of being accused like some of their former colleagues because of the history of this country.

Overall, citizens fear being targeted because of their personal opinions.

It is critical for the Rwandan government to amend and revise the genocide law in order to deter hate speech in a more effective way and prevent misuse against legitimate political dissent.

Citizens must be allowed to exercise their rights to freedom of expression in line with the constitution and international human rights obligations such as the Covenant on Civil and Political Rights (ICCPR) and the African Charter on Human and Peoples’ Rights (ACHPR), to which Rwanda is a full member and party.

The Global Voices community takes the security of our members very seriously. We omitted the name of this post's author in an effort to protect the security and safety of this person