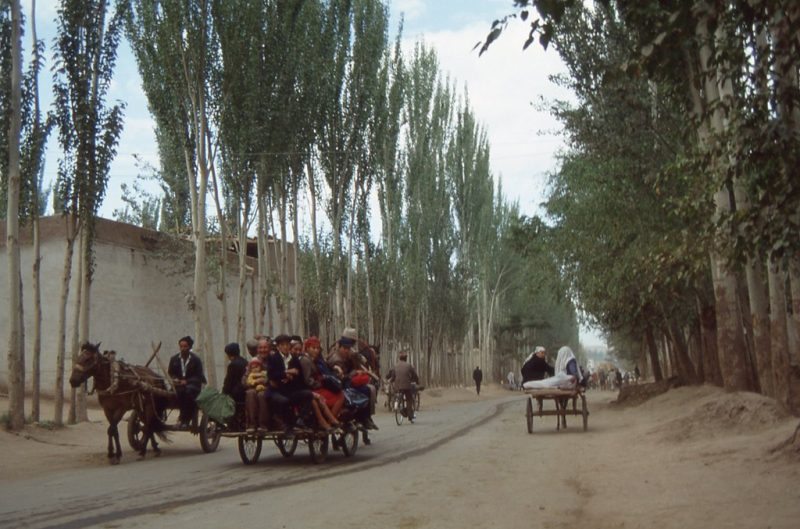 View of Kashgar in Xinjiang. “Silk Road 1992″ image by fdecomite, licensed under CC BY 2.0

One Uyghur who now lives in the Netherlands shares his story: His struggle to find out what has happened to his family in Xinjiang after his family experienced the full force of the Chinese government persecution of Uyghurs.

A sudden descent into hell

The story Nejmidin shared with Global Voices is that of countless Uyghur families. He was born in Kashgar, a predominantly Uyghur city in southern Xinjiang. His large family was prosperous and well-respected in the region. His grandfather, Raman Idris, was a businessman who specialized in chemical fertilizers and, and later, in property development. Nejmidin’s father, Mamutjan Raman, was also a wealthy businessman and owned an agricultural cooperative.

Nejmidin grew up in a close-knit extended family: Even distant relatives could be counted on for help and support. His family were observant Muslims who prayed five times a day and paid their yearly religious tax (zakat). His grandfather made the pilgrimage to Mecca. Such practices had to be done quietly, however, to avoid the ire of the Chinese authorities. Nejmidin remembers that in his school days, he and his fellow students were made to hold hands and pledge not to engage in religious ceremonies or practices, such as fasting and attending Friday prayers. Nonetheless, Uyghur families such as Nejmidin’s had some freedom to practice their faith quietly.

This changed suddenly and dramatically in late 2015. Nejmidin, who was already living abroad, received a tearful phone call from his mother, telling him his father had been accused of a “political crime” and sentenced to a year in prison in Aksu, a city in the south of Xinjiang. His younger brother, accused of a similar crime, had been sentenced to six months in prison in Kashgar. His mother begged Nejmidin never to call home again, for their safety, since having family abroad could result in intensified surveillance and interrogation.

An unbreakable wall of silence

Such traumatic situations are widely shared within the Uyghur diaspora: Despite experiencing deep angst about the fate of those left behind, exiles fear that any attempt to communicate with them could put them in danger. At the same time, Uyghurs living abroad face the hardship of making a living in foreign lands and struggling for their own status, and sometimes safety, given the pressure the Chinese government exerts on countries hosting Uyghur asylum seekers.

This has been Nejmidin’s experience. Unable to contact his family directly, he received information from people who maintained discreet contact with the region. In 2018, he learned that his grandfather had been accused of religious extremism and was detained in June 2016, around the beginning of the holy month of Ramadan. According to a source from Kashgar, his grandfather was rushed to a hospital, shortly after detention, where he passed away. The source claimed that his grandfather had been severely beaten before his death. He was seventy years old.

Nejmidin was also told that his family’s assets, including his grandfather’s sizeable savings resulting from a lifetime involved in real estate and the chemical fertilizer business, had been confiscated by the government. “In the name of re-education and vocational training,” Nejmidin told Global Voices, “the Chinese government took my grandfather’s life and took his wealth. They took everything he had accumulated in his lifetime and confiscated his property.”

In March 2019 he learned that his father, who was 50 years old, and one great-uncle, who was in his sixties, had also died in Chinese government detention. He could not find out any details about these deaths or even about the accusations that had been brought against them.

From despair to online activism

Desperate for news of his family, Nejmidin made numerous phone calls to police stations in Kashgar in February 2019. Some did not pick up, others hung up on him. Some even told him that he would need to come personally to Kashgar if he wanted to find out where his family was.

Giving up on local authorities, he attempted to contact the Chinese embassy in the Netherlands. In an unusual and desperate move, he forwarded the personal contact information of all of his family members to the Embassy. After making multiple calls every day for a week, he was finally told by the Embassy receptionist that his message would be relayed to a certain authority, who would decide, at an unknown time, whether or not to look into the case.

Eventually, another employee picked up the phone, and told Nejmidin that he was welcome to return to China and look for his family on his own. It has been over a year since Nejmidin contacted the Chinese Embassy. He has yet to hear back, but judging from the numerous profiles of detainees that have come to light in the last several years, one factor that may have led the Chinese authorities to target Nejmidin’s family is the fact they were observant Muslims. Assaults on Islamic practice and buildings have been shown to be a key element of China’s larger onslaught upon the Turkic cultures of Xinjiang.

As overseas Uyghurs like Nejmidin began to lose contact with their loved ones in the wake of China’s crackdown in their homeland, many began posting video testimonies on social media, profiling their missing relatives and demanding answers.

Nejmidin explained to Global Voices how his perspective shifted in 2018:

After seeing videos like that I decided to make one for my family members, to call on Chinese government officials to release my family. It was an emotional moment. When I was making that video I cried a lot. I felt miserable having to make the video because that’s not what people do in a country where there is law. In a country where there is law people are not locked up for being who they are, belonging to a different ethnic group or being a practicing Muslim… they wouldn’t need to make such video testimonies…but for us, we have to do this…we are desperate to hear anything from our family.

Since 2018, he has posted a number of videos on a platform for testimonies called Uyghur pulse. He does not know whether his efforts have made any difference, positive or negative, to his family's fate. But at the least, the Chinese government is aware that the victims of the crackdown have not been forgotten, and that relatives living abroad will keep speaking out on their behalf.

In the Netherlands, Nejmidin struggles to make a new life for himself, so far from the close family he grew up with. What happened to his family continues to weigh heavily on him, as he shared:

Each time I want to say that my father and grandfather died at the hands of the Chinese government, I cannot stop crying… I find it very difficult to come to terms with why our family members had to die…there is no logical reason behind what happened.