Justice for Marija banner from the Twitter profile of Marija Lukić.

A local strongman notorious for harassment of female employees in a remote Serbian municipality received a three-month prison sentence in a trial billed as the first high-profile #MeToo case in the country.

The trial of the 58-year-old former mayor of the town of Brus, Milutin Jeličić, nicknamed Jutka, ended on July 10, 2020, N1 TV reported.

We are very pleased with the verdict and this is a good move forward for the judiciary. The initiative “Justice for Marija” is very important for Serbia, as she is the first women who managed to send to prison a strongman who claimed support of the highest state officials thinking they would provide protection for him at court.

Marija Lukić, a married mother of two with a degree in economics, reported the complaint in March 2018.

She accused the then-mayor of continuously sexting her and attempting to grope her at the workplace. Police later charged the mayor with sexual harassment, sexual assault and abuse of authority.

Lukić lost her job, and the municipality issued a decision to shut down her husband's business.

Her husband, who publicly expressed support for Marija, said that he had received threats that police wanted to plant drugs on their property.

After the trial, Marija Lukić tweeted:

The story received international attention, with coverage from Equal Times, AFP and CNN.

The pro-democracy political movement Don’t Let Belgrade D(r)own (Ne da(vi)mo Beograd), which supported Marija Lukić at hearings, issued a statement of solidarity, stressing that the case showed that “no strongman is stronger than the loud public.”

Tweet: Justice for Marija Lukić! Justice for the women from Brus! Justice for all women!
Sign on photo: Violence against women doesn't have statute of limitations.

While the sexual predator appeared to receive support from the ruling Serbian Progressive Party (SNS) as well as from the Serbian Radical Party headed by the convicted war criminal Vojislav Šešelj, both backed down under public pressure.

In September 2019, Lukić received the Winning Freedom Award, presented to women who promote human rights, rule of law, democracy and tolerance in political communication, from the Maja Maršićević Tasić Foundation.

The Balkan Investigative Reporting Network listed her as one of the “Heroes of 2019: People Who Took Action for Positive Change” in the Balkans.

Standing up to a well-connected political player

According to the biography of Milutin Jeličić Jutka published on the fact-checking website Istinomer, Jutka was born in 1962 and has held various top political positions in the municipality since 2000.

In 2012 he was arrested on charges of abuse of power for purposes of embezzlement. But the subsequent court case did not begin until 2018, and has dragged ever since.

During the spring of 2018, three women from Brus told the Večernje Novosti newspaper that he was attempting to sexually assault them at the workplace and sending them messages of a sexual nature. Marija Lukić was one of them.

She continued to speak to media, explaining that during the two years from October 2015, when she became a secretary for the municipal administration, he had sent her over 15,000 “invites for intimacy” via SMS messages.

Jeličić denied these accusations, claiming he didn't blackmail or pressure anyone. In March 2018, he told media that Marija Lukić had demanded a better workplace and higher salary. He said that he told her that she couldn't have a managerial position before she earned a college degree. He also stated that he suspected that someone else sent the messages from his phone, because he often left it at his party's offices overnight.

Police called Jeličić in for questioning in March 2018. The trial started almost a year later, on February 5, 2019.

The charges against Jeličić were restricted to sexual harassment of Marija Lukić only, even though seven women reported him for trying to force them into unwanted sexual encounters.

Those seven women all lost their jobs, and were unable to find new ones in the small community of Brus. Some decided to move to other cities in Serbia, or abroad.

In June 2019 the municipal assembly voted to return him to his seat as a council member, giving him the chance to run for mayor again.

He participated in the June 2020 elections, freely campaigning as the head of a new political group called “For Modern Brus,” even while he was formally under investigation.

He was defeated at the polls by his former party SNS. 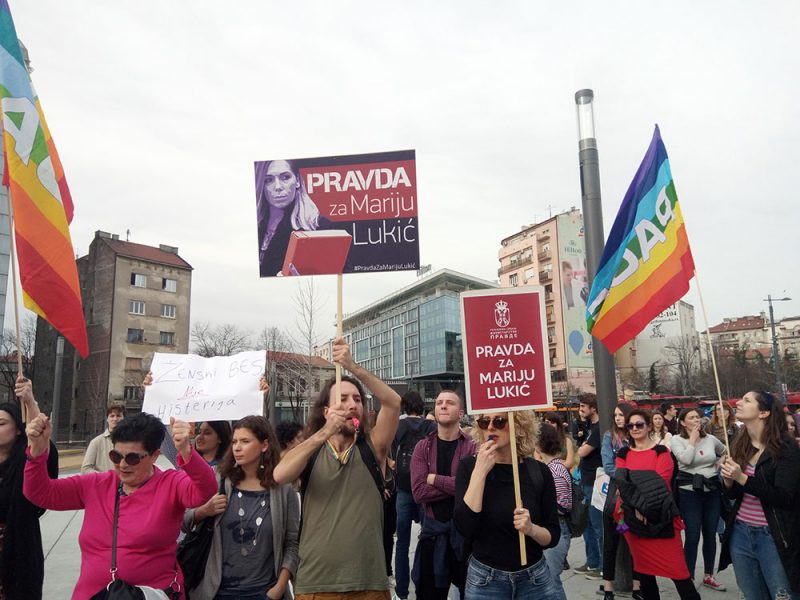 In February 2019 Marija Lukić appeared on the TV show Život priča (Life is Telling Stories) on TV Prva, to talk about the case. But the the cable company in her home town Brus, discontinued the signal to the entire municipality, citing “a malfunction.”

Officially, the reason was due to a power outage in the building housing the cable company.

In March 2019 Lukić received death threats on Twitter from a man previously unknown to her, saying that her initiative represents “a threat against the regime” and that she would be “eliminated” like the Kosovo Serb politician Oliver Ivanović, who was assassinated in January 2018.

After she reported him to the police, the man who issued the threats apologized, claiming “psychological consequences” from overwork. The police did not press charges.

In September 2019, Jutka launched defamation lawsuits against journalists who reported the story. He first sued a journalist from the Blic daily newspaper Ivana Mastilović Jasnić and her editor Predrag Mihailović. In November 2019, Serbian media freedom website Cenzolovka reported that the politician also had also sued the Danas daily newspaper for inflicting emotional pain.