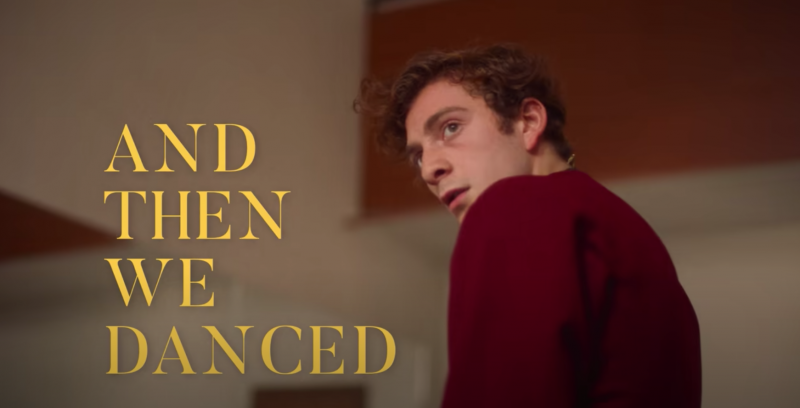 Screenshot from the trailer of the “And then we danced” movie by Levan Akin, showing the main character Merab. Image via Music Box Films’ December 2019 YouTube video.

A 2019 film about the story of an LGBT dancer continues to strongly polarise Georgian society.

Director Levan Akin's film is an homage to a country undergoing rapid and contradictory changes. It is a country besieged by foreign tourists alongside grinding economic hardships for most of the population — compelling some to emigrate. It is a tribute to the timeless courtyards of the Georgian capital Tbilisi, where watchful neighbours can be a lifeline — and a curse.

It is a portrayal of a city whose rebellious youth find solace in drugs (and the landmark, gay-friendly club Bassiani), and whose LGBTQ+ community must live their lives in secret, sometimes forcing themselves into heterosexual marriages. In this context, Merab's love for traditional dance — the “soul of the nation” — and for Irakli are steeped in tragedy, in a country struggling with sexism and patriarchy.

The film has made some powerful enemies.

Georgia is a predominantly Christian country whose Orthodox Church is legally separate from the state. Nevertheless, it is highly regarded, wealthy, influential and does comment regularly on social and political issues. Its official view on LGBTQ+ people is that they are “deviant” people.

On May 17, 2013, LGBTQ+ activists marching in Tbilisi were attacked by far-right protesters led by religious leaders on the International Day against Homophobia. Since 2014, the Georgian Orthodox Church has celebrated “Family Purity Day” every May 17 to fight what it describes as “gay propaganda.” When the LGBTQ+ community announced that it would hold its first Pride Parade in Tbilisi, church figures voiced strong criticism. The government announced that it would not provide protection for the event, leading to its postponement several times over the summer, and eventual cancellation.

The Georgian Orthodox Church condemned “And then we danced” even before it hit the screens, issuing angry statements during its filming. When it was first released in Tbilisi and the seaside city of Batumi on November 8, 2019, far-right protesters, once again with church support, prevented viewers from entering the cinemas. But this time, the government did react, by sending police to protect moviegoers and arresting protesters, thereby enabling the screenings did take place.

On November 6, the Patriarchate of the Georgian Orthodox Church made the following statement, which it later removed:

The Georgian Orthodox Church is, has always been, and always will be categorically opposed to the promotion and legalisation of sin in general, and of the sin of Sodom in particular. That is why we consider it unacceptable to show such a film in cinemas.

As the church emphasises its role as the guardian of the Georgian soul and the nation, the film was particularly sensitive given the prominent role played by traditional  dance. During the Soviet period until 1991, this dance almost became a shorthand for anything Georgian, in keeping with Moscow's interest in representing the country's 120 ethnic groups through strong folkloric images. Accordingly the chokha, the garment worn by Georgian male dancers, has come to visually symbolise Georgia. Tellingly, the main choreographer for “And then we danced” has chosen to remain anonymous, perhaps confirming the dancing teacher's words warning in the film about the “purity of the Georgian dance” and the “need to be masculine.”

It is no less telling that while the film begins with a black and white archive of these performances, it ends with a dramatic dance in bright blood red, free of those rules and freed in expression.

Another sensitive point was the fact that the film was chosen as Sweden's entry for the 2020 Oscar ceremony. The film has already obtained several awards, and several European and Asian countries have bought the rights to broadcast it as well — as producer Ketie Daniela notes, that is a rare privilege for a Georgian film.

In an interview this February, Levan Akin, the film's Swedish-Georgian director whose parents left Georgia in the 1960s, expressed surprised at the intensity of Georgian reactions to the film. “I knew it would be controversial but never thought it would be that controversial; there were riots, people got injured, and we could only show it for three days,” remarks Akin.

The public debate over the film is just the latest chapter in a longer fight for LGBTQ+ rights in Georgia. The first victory in that struggle was won in 2000, when Georgia decriminalised consensual same-sex relations. To this day, among all the 15 post-Soviet states (except the three Baltic states which are members of the European Union), Georgia has some of the most progressive legislation in this regard: in 2014 it amended its laws to make hate crimes related to sexual orientation an aggravating factor in prosecution. Yet there is a huge gap between the law on paper and the reality of life for members of the community who continue to face discrimination, hate speech, and violent crimes.

As Giorgi Gogia, Associate Director for Europe and Central Asia at Human Rights Watch, explained in an interview with GlobalVoices:

Georgia adopted comprehensive anti-discrimination legislation in 2014 that prohibits discrimination on all grounds, including sexual orientation and gender identity. The law also puts the ombudsman’s office in charge of overseeing anti-discrimination measures. The legislation was adopted as part of Georgia’s visa liberalisation action plan with the EU.  At the same time, the ruling Georgian Dream party proposed constitutional amendments defining marriage “as a union of a woman and a man”, thus a ban on same-sex marriage. I am afraid that the growing polarisation in the run up to the crucial parliamentary polls later in the fall might push the ruling party towards more populist stance. Homosexuality remains highly stigmatised in Georgia and is at the epicentre of “culture wars” between progressives and conservatives, with anti-gay elements backed by the Church, often with hateful rhetoric.

A more recent documentary, “March for dignity” (released in mid-June and directed by John Eames) has been released to revisit and reflect on the struggle for LGBTQ+ rights in Georgia:

Giorgi Tabagiri, a representative of Tbilisi Pride, which maintains its own Twitter account, told GlobalVoices that progress may be incremental, but it is progress nonetheless:

We had great plans for the 2020 Pride March, but after seeing all those events cancelled in Europe, we took the tough decision to call it off. And eventually we decided to launch other activities: rainbow masks in this COVID-19 period, that became very successful to the point that celebrities wore them on state television.

We also distributed  100 large rainbow flags that people used in streets and on buildings, which is a very sensitive issue here. Our office is picketed regularly by far-right groups demanding we take them down. On May 17, we organised an online demonstration against homophobia on Zoom, collaborating with media and broadcasting live on Facebook.

About 120,000 people watched it, which is a large figure for Georgia. Overall, we do see positive changes, including in legislation, but the problem is that it does not translate into social acceptance, so we have a long way to go. The movie “And then we danced” will certainly have a long-term impact in this regard, as more people will watch it. We also need more public figures as allies, but so far very few of them who are LGBTQ+ are out.

Akin's film may be a fiction, but the social stigma it depicts is deadly real. If things can change, perhaps stories about the Merabs and Iraklis of tomorrow will look very different indeed.