Could reform be on the cards for Jamaica's prison system? 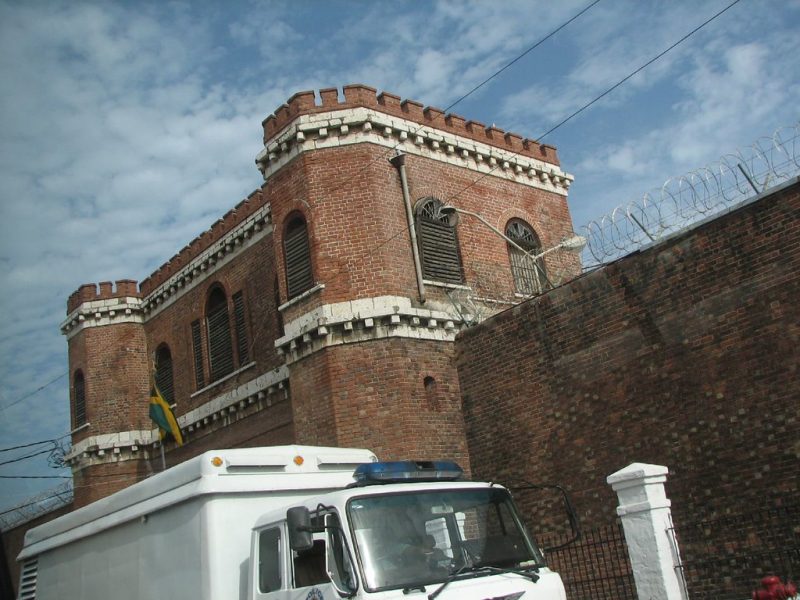 A police van escorts inmates who are being moved from one institution to another; in the background is the Tower Street high-security prison. Photo by Christina Xu on Flickr, CC BY-SA 2.0.

This is the second instalment of a two-part series on how the Jamaican prison system deals with inmates suffering from mental health issues.

After the Independent Commission of Investigations (INDECOM), which examines abuses of human rights by Jamaica's security forces, shared its first quarter 2020 report on the country's prison system at a June 3 press briefing, Jamaicans were horrified to learn of the conditions in which 81-year-old inmate Noel Chambers died.

The octogenarian, who suffered from mental health challenges, died at Kingston’s Tower Street Correctional Facility on January 24. He had been incarcerated for 40 years without being tried, having been deemed unfit to plead to a murder charge.

The resulting public outcry soon turned his death — and what it says about Jamaica's penal system — into a political football.

The issue became sidetracked by a partisan political debate about which administration had rejected a controversial offer back in 2015 from then UK prime minister David Cameron to build a new prison on the island. The finger-pointing was roundly dismissed by social media users:

I don't care about what happened with the prison deal, who said what, who rejected who etc and quite frankly, debating it is a waste of time

The government responded with alacrity in the wake of the outrage, with Prime Minister Andrew Holness noting:

The death of Mr. Noel Chambers while in custody within the Tower Street Adult Correctional Centre is both tragic and heartbreaking […] This tragedy is undoubtedly ranked among the most dreadful inheritances of a penal and judicial system that are in urgent need of reform.

Are the measures enough?

On June 4, the Ministry of National Security announced that an audit would be conducted into Chambers’ death.

On June 8, Chief Justice Brian Sykes announced the establishment of a task force to consider current laws affecting those in custody who suffer from mental illness. The group is expected to report its findings within 120 days.

While Director of Public Prosecutions Paula Llewellyn conceded that successive administrations have shown “insufficient care and attention” to the need for a forensic psychiatric facility, she concluded:

Between the Mental Health Act and the Criminal Justice Administration Act, efforts have been made systemically; it's just that it was not being carried out in the way that it ought to have been.

Journalist Jovan Anthony posted several statements from the government entities involved, which included a rare apology from the chief justice:

READ: The head of prisons #GaryRowe and the Judiciary have now released statements (pictured) on #NoelChambers.

One reason why greater transparency is absolutely necessary is that this audit process may be being carried out by entities and/or individuals responsible for the circumstances that led to Mr Chambers’ incarceration and death.

We need to remember that it wasn’t the Ministry of National Security that brought Mr Chambers’ death to public attention. Without INDECOM’s report, we would not have known.

Since Chambers’ death, two former inmates have been freed after decades of imprisonment. Isat Buchanan, legal counsel for the human rights nongovernmental organization Stand Up For Jamaica (SUFJ) succeeded in having one mentally ill man, 71-year-old George Williams, released from the Tower Street prison on June 24.

Shouts of ‘freedom’ were heard outside the St Catherine Parish Court […] as 71-year-old George Williams was released from prison after spending close to 50 years behind bars without a trial. With a black eye from a beating on the weekend, Williams was met by family members and supporters. [His] brother Aldrin Jones said, ‘The journey will be hard, but he is prepared for it.’

Another mentally ill inmate, 49-year-old Abraham Lawrence, was freed on July 10, after being deemed unfit to plead and spending over 25 years in jail. He had been charged with malicious destruction of property after throwing stones at a group of men and a police car in 1994.

Upon Lawrence’s release, his brother emphasised the importance of caring for and supporting the mentally ill.

In a Zoom discussion, SUFJ founder Carla Gullotta, who noted that “the justice system in Jamaica does not work for too many people,” echoed his sentiments. She explained that a detainee’s mental health quickly deteriorates upon entering the prison system, because of “an environment which is not acceptable under any human rights basic principles.”

There are approximately 350 mentally ill inmates being held in special blocks in two Jamaican prisons; Gullotta believes they should be somewhere else, as the penal system has only one psychiatrist serving a total of 4,600 inmates. The only health service these mentally ill prisoners currently receive is one monthly injection to keep them calm.

According to one member of the Jamaica Psychiatric Association who took part in the Zoom discussion:

The mentally ill are being asked to prove their innocence for future crimes, which is wrong […] Locking someone up has no therapeutic value, merely an issue of security. You are violating the rights of these persons either in prisons or mental hospitals to please the society at large, [which is] working on the incorrect presumption that they are all violent.

Another death behind bars

INDECOM is currently investigating an incident involving another death of a Tower Street inmate.

Earlier this month, during an argument with a warden, the prisoner was allegedly struck with a baton and later died. The incident sparked a hunger strike among some inmates. One prisoner, speaking anonymously on radio, said that some prison officers are abusive and suggested that existing rehabilitation programs should be extended.

It is now the general hope that Noel Chambers’ tragic death will not be in vain, that more prisoners “lost in the system” will be freed, and most importantly, that the system itself undergoes meaningful reform.