A man confessed to the murder and was convicted, but few believe that story. 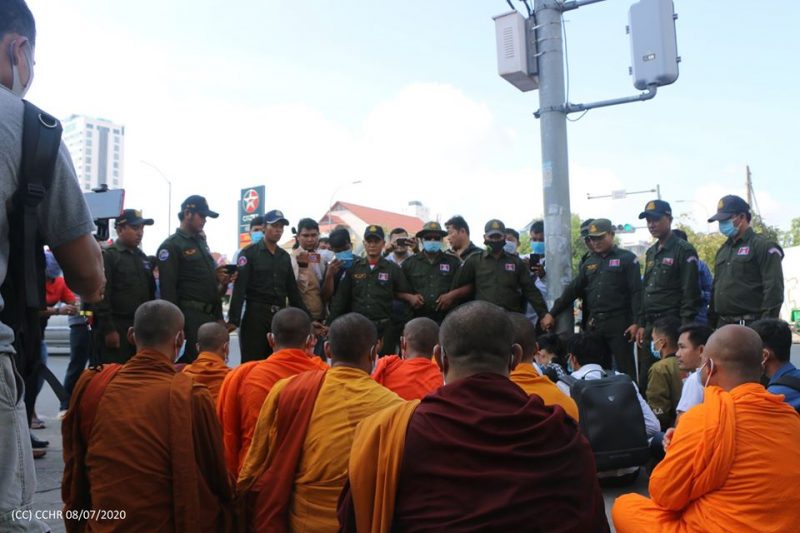 Around 20 Cambodian monks and youth activists were barred by the police from offering a Buddhist prayer ceremony near a gas station where a political analyst was killed on July 10, 2016. Photo from the Facebook page of the Cambodian Center for Human Rights

Individuals and groups were blocked by police and local authorities in Cambodia from holding activities commemorating the fourth anniversary of the death of political analyst Kem Ley.

Kem Ley was killed at a gas station on July 10, 2016. Many suspect the murder was linked to his work as a commentator and political analyst. He was murdered days after he gave a radio interview about a Global Witness report detailing corruption under the Hun Sen government, which has ruled the country since 1985.

The man convicted of the murder said that he killed Kem Ley because the latter owed him money. But civil society groups have raised doubts about the investigation and trial and insist that the perpetrators of the crime have yet to be held accountable.

Every year since 2016, various groups and individuals have organized activities to mark the anniversary, while authorities deploy scores of police to disrupt those activities and harass participants.

This year was no different.

This morning, on 8 July 2020, around 20 youths and monks met with restrictions when they attempted to gather at Bokor Caltex gas station in Phnom Penh in order to commemorate the fourth anniversary of the death of Dr. Kem Ley who was fatally shot in broad daylight by a gunman. pic.twitter.com/AU3jF20vtk

On July 8, a group of monks and young activists were prevented by police from holding a memorial service at the gas station where the late analyst was killed. They were forced instead to hold their prayers on a sidewalk more than 100 meters from the site.

A young man wearing a shirt with Kem Ley's face printed on it was arrested that day.

A youth who wear Dr Kem Ley t-shirt with a message Dr. Kem Ley is the legend of Freedom Expressions was brought to Chamkar Morn district police station.#KemLey pic.twitter.com/zwABB4JOKZ

The next day, a group of youth leaders were blocked by security forces from travelling to Kem Ley’s family home in Takeo.

Another convoy of monks and activists was blocked on July 10. But supporters of the slain commentator continued to honor him by embarking on a march of several kilometers.

Kem Ley, the man speaking truth to power, still hunt authorities. While many were there to commemorate the 4th anniversary of his murder, 19 tuk tuk & a bus was blocked so they all have to walk around 8 km to his home. I joined w/ them to show our solidarity & call for JUSTICE! pic.twitter.com/H9sBdawwdb

Chheang Sinath, a tuk-tuk (three-wheeled vehicle) driver and member of the Independent Democracy of Informal Economy Association, criticized authorities’ actions in an interview with VOD news:

We just came to participate and show respect. Just participating and remembering [Kem Ley’s] sacrifice for society is seen as a wrongdoing [by authorities]. This is not appropriate unless we hold a demonstration or protest something. This is just a ceremony to pay gratitude to him, but authorities tried to stop us.

Venerable Bo Bet, a monk from a Phnom Penh pagoda, expressed frustration that his group of 10 monks was not allowed to pay respects to Kem Ley:

We want to pay respects at the place he was killed, and we will also hold ceremonies at other places. We come here and want to burn incense. We want to hold funeral rites at the site. We want to remember his good deeds here because we do this only once a year.

Kem Ley’s wife and kids were forced to seek asylum in Australia after his death. Bou Rachana thanked supporters of her late husband for their efforts:

I admire them the most because they know that every year when there is any celebration [of Kem Ley], authorities will always ban [gatherings] and use violence against them, but they still strongly participate. I respect their kind hearts.

More than 30 civil society organizations have signed a statement asking the Cambodian government to form an independent and impartial commission to thoroughly investigate the murder.

They also condemned the continuing harassment of Kem Ley's supporters: