Coders created a secure tool to check the list 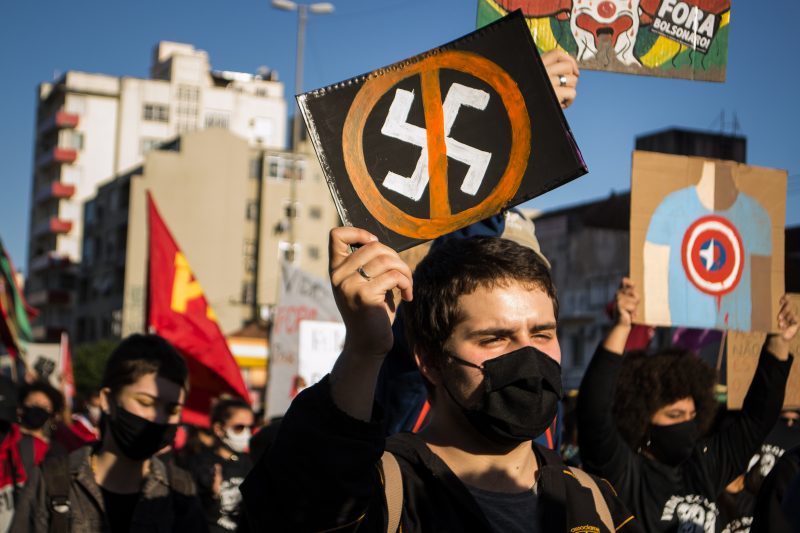 Anti-fascist demonstration in Porto Alegre, in the South of Brazil on June 14th. Photo by Maia Rubim via Benedictas Fotocoletivo/Used with permission.

Last month, hundreds of individuals in Brazil were named—without their consent— in lists aimed at identifying ‘’anti-fascists.’’ One of the lists, which circulated on WhatsApp, doxxed people's personal information such as names, pictures, and addresses. The other was compiled by a right-wing member of parliament with the help of his followers on social media. This list was not made available to the public and it is not clear which personal information it contains.

In early June, a 900 page PDF list circulated on Whatsapp. When Brazilians opened it, hundreds of them found their names, pictures, social media profiles, addresses, and some cell phone numbers. Apart from doxxing personal information, the document listed those in the list as “anti-fascists”. Until now, no one confirmed who compiled the data, nor the intent behind it.

Doxxing is the practice of publishing someone's personal information without their permission, with the intention to threaten or intimidate. While some of this information may be readily available or easy to find such as a user's own photos posted on their public social media profiles or pages, the intention with doxxing is to harass and threaten the targeted person.

Rumors circulated on social media that the flagged people belonged to leftist movements, although there is no formal proof of it. Professor Lola Aronovich, from the Department of Foreign Languages at the Federal University of Ceará (UFC) tweeted that most of the names were taken from Facebook. “Whoever made the dossier went after a visual profile (tattoos, piercings, etc.),” she wrote.

A few days later, there was a second list, similar to the first one. Deputy Douglas Garcia, an elected member of the local parliament in the state of São Paulo from Brazil's ultraconservative Social Liberal Party (PSL), said he compiled this second list.

In the Twitter video recorded by the pro-Bolsonaro parliamentarian, Garcia ran his fingers through his stack of papers. He claimed to have received between 700 and 1,000 names from his social media followers.

Garcia referenced U.S. President Donald Trump's recent announcement about his plan to designate Antifa, a loose term used to refer to left-wing antifascist groups and movements as terrorist. The term is an abbreviation for anti-fascist, and Antifa activists have been involved in anti-racist protests in the United States. The parliamentarian promised to send his list to the United States embassy and to the police to investigate the those in it and their links to “terrorist activities.”

Both documents — the public one on Whatsapp and the one compiled by Garcia — became known as “the anti-fascist files”.

People on social media started to believe the first and second lists are one and the same. Leftist lawmakers accused Garcia of defamation and violation of people's privacy and advised those on the list to organize themselves for legal protection.

In a call via WhatsApp with Global Voices, Garcia assured that his file is different. “Mine has no names of women and is only about people from the state of São Paulo,” he said. He also made clear that the names he collected were not made public. Instead, Garcia confirmed that the file was sent to the Federal and the Civil Police. “It is my job to have an open space in my office for complaints. When I saw people breaking public and private property during the anti-fascist demonstrations, I needed to act. This is a crime,” he said.

Garcia compiled the data after anti-fascist organizations, stemming from football clubs, held protests in at least 15 cities across Brazil. On June 1, thousands of people marched on the largest avenue in São Paulo in response to pro-Bolsonaro, anti-lockdown demonstrators who occupied Avenida Paulista every week in May despite the Covid-19 pandemic.

The pro-Bolsonaro lawmaker is officially under investigation since June 8, accused of administrative improbity because of his list. If he is found guilty, he could lose his seat. Opposition lawmakers believe Garcia attempted to intimidate activists and therefore requested the investigation. Even though Garcia created the file, the parliamentarian claims to be anti-fascist himself.

A tool to prevent the further spread of the doxxed information

Not many people on the public list complained about it online for fear of more exposure. Lucas Lago, a developer at the data platform Project7c0 saw many of his friends worry when both lists were known to the public. “They were sharing the public list online so that other people could consult their names,” Lago told Global Voices via Skype.

He later contacted fellow coder Eduardo Cuducos to help him create a tool that would prevent people's personal data from spreading while allowing them to check if they are on the list. For him, it was important to have a secure way of knowing who is on the list. While the PDF is still available elsewhere online, with their tool, Lago and Cuducus sought to minimise the further spread of the personal information of the people on the list.

Any way of sharing of personal data [online] that classifies people is not only complicated but illegal. The situation in Brazil is tense and polarized, this opens the door to putting the whole person at risk. I felt compelled to do something so that people knew about the risks if they are on the list. (…) [Sharing the list online] can end up doing more damage if done without a lot of consideration. People have to approach everything tactically.

The developer also stated that many users reached out to him looking for legal advice, once they found their names on the list. “We forwarded them lawyers and NGOs that deal with data leaks, for better assistance,” he said. They do not know how many people used it as they do not keep users’ data to protect their identities.

For Lago, the tool marked a successful turning point since the first list was made public. “It allowed people to acquire more knowledge about their situation”, he said.