COVID-19 outbreak highlights unaccountability of American military based in Okinawa 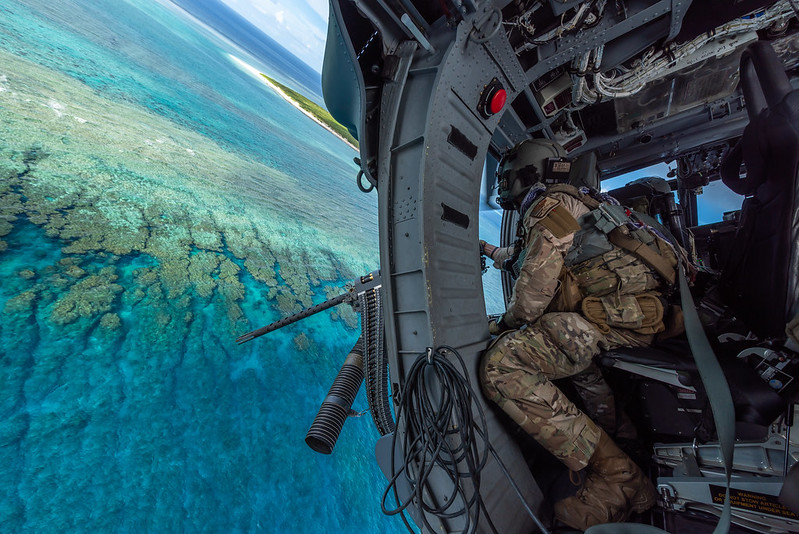 “U.S. Air Force Tech. Sgt. Keon Miller, special mission aviator assigned to the 33rd Rescue Squadron, looks out the gunner’s window aboard an HH-60G Pave Hawk, July 31, 2019, out of Kadena Air Base, Japan.” The U.S. Air Force operates Kadena Air Base in Okinawa, which the largest U.S. air base in the western Pacific, and is the site of a COVID-19 outbreak in July, 2020. U.S. Air Force photo by Airman 1st Class Matthew Seefeldt, from Airman Magazine Flickr account. Image license: CC BY-NC 2.0

At least 99 U.S. military personnel and contractors based in the southwestern Japanese prefecture of Okinawa have tested positive for COVID-19 since July 11, causing further strain with a Japanese host community that has been forced to endure regular assaults, accidents and environmental degradation over the past 75 years.

Since July 11, COVID-19 infections have been detected at U.S. bases throughout Okinawa, with most of the cases occurring at Futenma and other U.S. Marine Corps bases near Naha, Okinawa's densely populated capital city. U.S. Marines seem to make up the bulk of the 99 cases that make up the COVID-19 outbreak in Okinawa in July.

So far, 148 Japanese citizens or residents of Okinawa (as opposed to U.S. military personnel stationed in the prefecture) have tested positive for COVID-19 since February 2020. Four of these cases were reported after July 11, with zero new cases of COVID-19 being reported on July 13.

With a population of 1.45 million people, Okinawa hosts at least 47,000 American military personnel and their dependents. U.S. Marines, Army, Air Force and Navy personnel are all stationed on Okinawa, and all generally have their own rules about conduct, with their own chains of command.

Like Okinawa, mainland Japan has also avoided large numbers of COVID-19 infections compared to many other countries since the pandemic was declared in March, although starting on July 10, Tokyo, with a population of 14 million, started reporting more than 200 new cases of the disease for several days in a row.

So far, there are no official explanations from U.S. authorities about the outbreak in Okinawa among military personnel, or its source. However, a video has been circulating on social media of a large beach party held in early July, where participants appeared to ignore the Okinawa prefectural government's official social distancing guidelines for public spaces.

Allegedly a video of the bbq party in Okinawa that may be where the US military COVID-19 cases originated. Not only no social distancing of any kind, they didn’t have a permit for a 300+ party in the park. They left when neighbors complained, leaving a ton of trash. https://t.co/XEOEzoyT6y

Translation of original tweet: Here's a video going around of the same U.S. soldiers who are rumored to be part of a COVID-19 “cluster” enjoying an Independence Day celebration. Even if they're not part of the cluster, how is it possible that 300 people could gather, without permission in a park to gather, to drink and party it up? Even though the gathering was broken up after complaints by neighbors, they still left a lot of trash.

The original video of the beach party was shared online by a Twitter user with the handle @IAMCITI, an American man living in Okinawa who allegedly organized the event. After a COVID-19 outbreak was declared, IAMCITI swiftly deleted the video, but not before being blamed for helping spread the disease.

“My beach event has no confirmed Covid cases, according to Okinawa public health,” IAMCITI said in an Instagram message to Global Voices on July 13. “Also the attendees and my friends are all Covid negative as far as we know.”

With no information about what sparked the ongoing July COVID-19 outbreak in Okinawa, there is now speculation online that a recent U.S. Marine and Air Force troop deployment to Okinawa may have been responsible for the outbreak.

“The whole COVID situation was fine out here [in Okinawa] until the recent UDP units arrived. It was too good to last,” said Redditor Fastbondgush, commenting about the July COVID-19 outbreak in r/USMC, a Reddit channel devoted to discussing the U.S. Marine Corps. As part of “UDP”, or Unit Deployment Program, new troops are rotated into a new deployment. There is speculation that new troops had arrived in Okinawa sometime in June from Seattle, in Washington State, which has been hit hard by the COVID-19 pandemic.

Following the outbreak, U.S. Marine and Air Force personnel were essentially confined to barracks in order to prevent further spread of COVID-19. However, Okinawa officials expressed frustration that they had little to no influence over whether or not U.S. troops practised social distancing and other preventative measures. For example, once the outbreak was identified, the U.S. military quarantined infected soldiers and base staff in local hotels in the community, rather than in the more isolated confines of local bases.

Okinawa, which hosts 70% of U.S. military installations in Japan, has longstanding grievances about the conduct of the 45,000 American military personnel who occupy the prefecture. Most recently, in June 2020, Kadena Air Base downplayed a fire that exposed dozens of people, including local residents, to chlorine gas and smoke.

Other acts of mayhem, such as the 2016 murder of a local woman by an American military contractor, still occur regularly, and U.S. military authorities have been implicated in organizing misinformation campaigns targeting locals. Tensions over base construction continue to dominate local and national local politics.