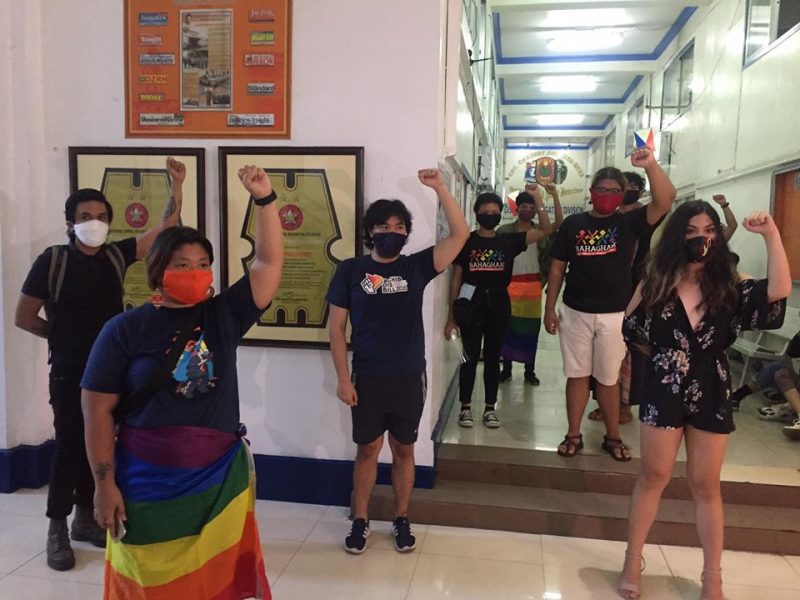 On June 26, a Pride protest was organized in Manila in the Philippines to protest the passage of an anti-terror bill and the government’s response to the COVID-19 crisis. The police arrested 20 individuals, and charged them with resistance and disobedience to authority, illegal assembly and violation of Republic Act No. 11332, the Law on Reporting of Communicable Diseases. They were released on June 30 for further investigation.

Carla Nicoyco, a poet and member of activist LGBTQ+ group Bahaghari, shared with Global Voices via Facebook messenger her experience during the protest, arrest, and detention. First, she explained why they organized a Pride protest in Mendiola, a place located close to the presidential palace:

We believe that at its very core, Pride is, and will always be a protest; Pride means fighting back. And so we marched to Mendiola bringing the demands of the people for the right to health, economic aid, and democracy.

Images of the protest can be seen on this tweet:

More than 10 activists are now detained at the MPD headquarters in Manila. Photos courtesy of Bayan Muna#PrideMonth #PrideMonth2020 pic.twitter.com/yXfqSOIyP7

The decision to hold the rally in Mendiola was widely applauded since it was the first time that a group dared to protest near the presidential palace since COVID-19 lockdown restrictions were imposed in March.

ICYMI: Despite following physical distancing and the expiration of Bayanihan Heal As One Act, police officers nabbed 20 members and allies of LGBTQ+ group @Bahaghari_Natl during a #Pride March protest in Mendiola earlier today. pic.twitter.com/IreX4MMX14

Bahaghari echoed the call of many groups opposing the Terror Bill for containing overbroad provisions that could criminalize many forms of dissent. It castigated the government of President Rodrigo Duterte for its ‘militarized’ response to the pandemic instead of focusing on delivering aid to displaced citizens.

2020 seems like the end of the world. It is marked with fear and paranoia, hostility and violence. The stakes are higher now since we're experiencing a pandemic under the most incompetent and inutile government that only knows a militaristic response to every problem. This year's Pride, 51 years after Stonewall, exemplifies that the LGBTQ+ community is still not free as seen in the violent arrest and detention of Pride 20.

Pride protesters inside a Manila police station. Photo from Facebook page of Bahaghari, used with permission.

She then narrated what she and her friends endured inside the Manila police station:

We can say that we were disappointed but not surprised with the violence Pride 20 experienced under the hands of the police. We remained vigilant and invulnerable when we were detained. For almost 5 days, we experienced different forms of torture, from psywar to sexual harassment. Male and female detainees were kept in different offices, and we were only given a corner.

She expressed gratitude to the overwhelming support given by many groups and individuals during their detention which she believes was an important factor for their release:

All these we endured for almost 5 days, and we would not have survived if it were not for different organizations and individuals here and abroad who gave material and moral support.

Finally, she concluded with a rousing message addressed to the LGBTQ+ community:

Us queers have lived our days in hiding and fear. We're living in a world that does not want us to exist. Like other oppressed sectors of society, we've experienced abuse, injustice, and violence firsthand. We've been handed our sorry lot of the world when we know there's a better one. But we're here. We persist against all odds. Our existence is resistance. We're here to dismantle oppressive systems, to change the things we cannot accept. We stand hand in hand with our other oppressed siblings all over the world. We must resist against the Duterte regime, and the other fascists of this world, these slouching beasts. Look them in the eye and be at the vanguard of this revolution together with the toiling masses.

After the release of the 20 Pride protesters, they filed a counter-charge against the police for unlawful arrest, slight physical injuries and maltreatment.