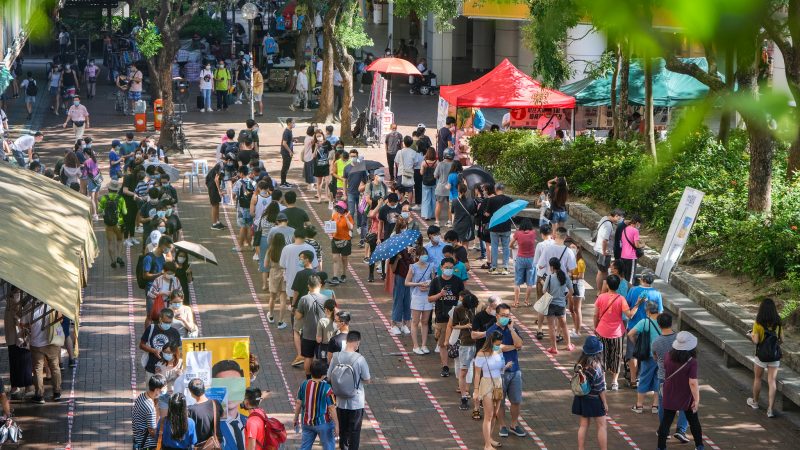 The original version of this post is written by Rachel Wong of the Hong Kong Free Press on July 12 2020. The following edited version is published on Global Voices according to a content partnership agreement.

Over 600,000 Hongkongers cast their ballots in the democratic camp's primary elections over the weekend, despite the pro-Beijing authorities claiming the informal exercise may be illegal.

The initial results, which were announced on July 13, indicated that pro-democracy voters preferred young and radical representatives as candidates for the Legislative Council (LegCo) elections slated for September.

Candidates who had most votes in the five geographical constituencies included Hui Chi Fung from the Democratic Party (Hong Kong Island), Jimmy Sham from the League of Social Democrats (West Kwoloon) , Eddie Chu from the Land Justice League (West New Territories), famous activist Joshua Wong (East Kowloon) and former journalist Gwyneth Ho (East New Territories). The candidate with the most votes in the big district functional constituency is Roy Kwong from the Democratic Party, while among candidates slated to run for the public health service sector, Winnie Yu received a majority of the votes.

Bar Eddie Chu, the winning candidates above were all under 40 years old. Final results, which will incorporate 20,000 paper ballots, will be announced July 14.

The democratic sector will nominate about 30 candidates to run for the geographical constituencies, big district functional constituencies and the public health service sector in the September LegCo elections based on the primary results.

Currently, the Legislative Council is dominated by pro-establishment lawmakers who side with Beijing on the subject of the city's political course. The democrats hope to win a majority of more than 35 seats in the upcoming elections.

Tai initially estimated a turnout at about 170,000 people. But after the first day of the primaries, the turnout had surpassed 220,000.

Tai told the press that after the polls closed on July 12 that they had recorded over 590,000 electronic ballots, while more than 20,000 paper ballots were processed during the two-day vote:

Hong Kong people have made history again – another miracle happened in Hong Kong…Hong Kong people – after all these years, since 2003 – have demonstrated to the world, and also to the authorities, that we have not given up to strive for democracy.

After the elections, China Daily ran a report citing pro-Beijing politicians who called the primaries “unfair” and potential “cheating” ahead of the LegCo vote.

Throughout the weekend, citizens queued at over 200 polling stations in the heat, despite news of a fresh Covid-19 outbreak hitting the headlines.

Jeffie Lam's video shows a long queue outside one of the polling stations at around noon on July 12:

#hongkong – hundreds of hkers have lined up outside a polling station in tin shui wai to vote in the pro-democracy bloc’s primary. organisers have earlier indicated the total turnout could hit 500,000 pic.twitter.com/p9iktKqqwU

One voter, surnamed Wong, told Stand News that the primaries were a true reflection of citizens’ will and said that he hoped that localist candidates would win in order to change the political landscape dominated by older democrats.

“Localists” tend to be more radical in terms of their commitment to constitutional reform and opposition towards Beijing's encroachments in in Hong Kong when compared with older generation democrats.

Another voter, surnamed Lau, urged more Hongkongers to participate in the election in an interview with Apple Daily.

In light of all the events that happened over the past year, we should cherish this opportunity as our liberty is stifled.

The primaries were organised under huge political pressure. As all voters have to verify their identities and residential addresses in person, the organizers had to set up polling stations around Hong Kong. However, threats came from all directions:

#HK govt has done whatever it could to stop this peaceful & lawful democratic exercise. A Sha Tin District Councillor got a letter from Housing Authority saying his office couldn’t be used as a polling station. Landlord of ice cream shop warned it was breaking terms of its lease. pic.twitter.com/XOOTheDLgr

Still, over 30 pro-democracy shop owners withstood the pressure and turned their shops into polling stations during weekend.

Other voting spaces were even more creative:

Hongkongers have been creative in the venues of the “polling station” for the democratic primary, for example a classic double decker is being used as one of the stations.#HongKong #HKprimaries #FightForFreedom #StandWithHongKong pic.twitter.com/z2kiZRTI8M

Two days before the elections, Secretary for Constitutional and Mainland Affairs Erick Tsang claimed that participation in the primaries could violate the law due to organisers’ calls for the democratic camp to veto the annual government budget if they win a majority in the legislature.

Then, the day before the election, Hong Kong police raided PORI. The raid came after a pro-Beijing newspaper story quoted an anonymous netizen's accusation that PORI had failed to protect personal data in their surveys, resulting in data leakage.

Voters and organisers were also harassed at polling stations by supporters of the political establishment during the two-day vote, but nothing was able to stop them having their say.