Civil society has issued a robust response to the crackdown 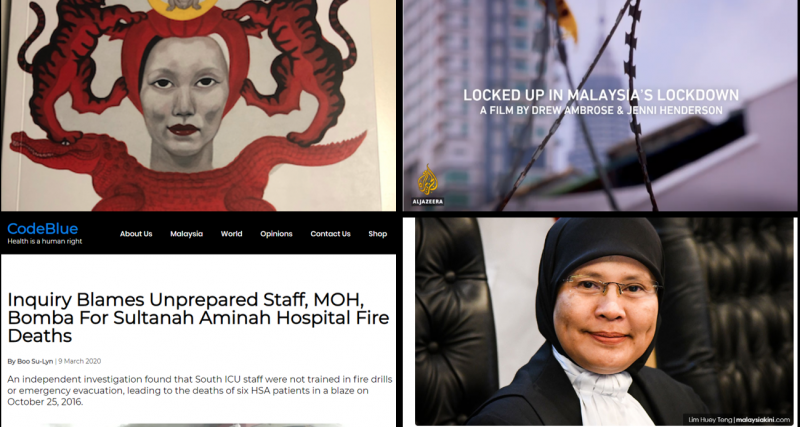 Collage from the news websites of Al Jazeera, Malaysiakini, and Code Blue, plus the cover of a banned book in Malaysia.

News groups, editors, and journalists continue to face charges and investigations in Malaysia for fulfilling their duty to inform.

Since then, there has been a surge in cases filed against critical journalists.

Here are some of the major cases in the past month:

Qatar-based broadcaster Al Jazeera released on July 3 a documentary that tackled Malaysia’s alleged crackdown on undocumented migrants and refugees during the COVID-19 pandemic.

Malaysian officials quickly condemned the report as false and malicious, and insisted that migrants were treated well in detention centers. The immigration office also published in response the personal information of a Bangladeshi worker who was interviewed in the documentary.

Al Jazeera is now under investigation under section 500 of the Penal Code, section 233 of the Communications and Multimedia Act (CMA) as well as section 4(1) of the Sedition Act.

Zaid Malek, coordinator for Lawyers for Liberty, saw nothing illegal in the content of the documentary:

…there is nothing there that warrants any criminal investigation by the authorities. Nothing highlighted in the documentary is in fact new; it merely echoes criticisms already brought forth by various NGOs

If there truly was anything that was misreported, the government could simply release their own statements to refute any inaccuracies.

A total of 35 civil society groups and 17 individuals have signed a statement expressing support for Al Jazeera. They also criticized officials for exposing the Bangladeshi worker to potential harm:

The government should not be complicit in human rights abuses against migrant workers, such as doxxing and threats, by promoting hatred or discrimination in their messaging.

Contempt charges for Malaysiakini over comments by readers

News website Malaysiakini and its editor-in-chief Steven Gan face contempt of court proceedings based on a case filed by Attorney-General Idrus Harun over comments left on the website by readers.

Idrus claimed that five comments in the Malaysiakini article titled ‘CJ (Chief Justice) orders all courts to be fully operational from July 1′ accused the judiciary of corruption. Idrus said these comments “threaten public confidence in the judiciary and are clearly aimed at tarnishing the administration of justice by the judiciary.”

We have removed the allegedly contemptuous comments from our website not long after the news report on the reopening of the courts was uploaded.

Malaysiakini filed a court petition to set aside the case but this was dismissed. The contempt hearing is now scheduled for July 13.

Human rights group Suara Rakyat Malaysia warned about the impact of the ruling on the work of other news organizations:

…the finding of the Federal Court thus far would undoubtedly have a chilling effect on free speech as a media organization may be liable for commentaries by its readers.

…the finding of the court suggests that individuals can conduct organized posting of contemptuous material on any moderated media website or social media comment sections to incriminate the said platform.

In March 2020, health news website CodeBlue published four articles highlighting the declassified findings of an independent inquiry into a 2016 fire at the Hospital Sultanah Aminah (HSA) which claimed the lives of six patients.

This triggered a police investigation for possible violation of Section 203A of the Penal Code which criminalizes the disclosure of information.

The Centre to Combat Corruption and Cronyism issued a statement deploring the police action:

The act of writing about and disclosing the findings related to the fire was done to safeguard public interest and therefore should be protected and not be treated as a crime.

Cops took my phone. It was a rather gruelling session, but I managed to stick to my ethos. This case isn't about me; it's about upholding transparency and accountability in governance. Health care providers must uphold patient safety. Learn from the fatal HSA fire; don't hide it.

Tashny Sukumaran, a correspondent of Hong Kong-based South China Morning Post, tweeted that she was summoned to give her statement to the police about the book ‘Rebirth: Reformasi, Resistance And Hope in New Malaysia’.

I have been called to Bukit Aman this Friday so the police can take my statement regarding the banned book Rebirth: Reformasi, Resistance and Hope in New Malaysia. A lawyer will be accompanying me.

Released earlier this year, the book features commentaries about the 2018 election which toppled the party that ruled the country since the 1950s. Malaysia’s new prime minister said he is willing to work with the leaders of the former ruling party.

Tashny Sukumaran contributed an article in the book.

The book suddenly became controversial and was eventually banned by the new government after complaints were filed against its cover, which allegedly disrespected the national coat of arms.

Artists and activists said the book cover is based on a work of art that has been featured in art galleries since 2014.

In a Twitter thread on the summons, Sukumaran castigated the government for harassing critics instead of focusing on addressing the COVID-19 crisis:

In the face of a global pandemic and a looming recession, it is absolutely unconscionable and irresponsible that such undue focus be placed on harassing and intimidating media personnel, activists and migrants.

The government of the day should be working to earn the confidence and trust of voters, particularly given how it came to power this March. Creating a culture of fear and wielding state apparatus in a repressive manner to silence citizens is not the way to do this. Obviously.

As cases continue to pile up against dissenters and journalists, civil society groups have reiterated their demand to the government:

Enact a right to information law and repeal or amend repressive laws such as the Printing Presses and Publications Act, the Official Secrets Act, the Sedition Act and Section 233 of the CMA, so that these laws are not utilised arbitrarily to stifle all manner of speech.