‘Why did your father die?': Serbia's COVID-19 chaos spills onto Belgrade's streets

Responding to a pandemic is tough. Putting down a protest with force is a reflex. 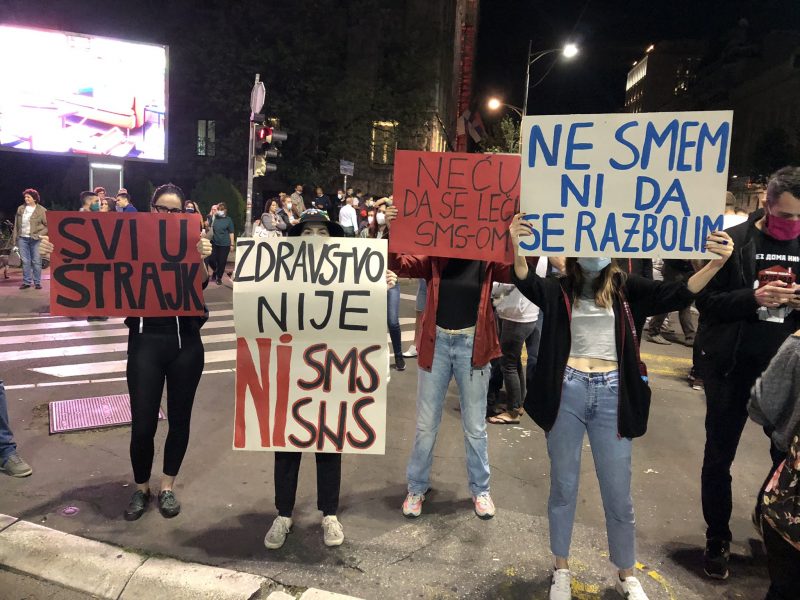 Protesters in front of Serbian parliament in Belgrade on July 8, 2020. Signs read “All join the strike,” “Health system is not SMS nor SNS” [acronym of the ruling Serbian Progressive Party], “I don't want to get treated via SMS,” “I am not even allowed to get sick.” Photo by Zoran Torbica, used with permission.

Social networks in Serbia were still raw on July 8 after police and so-called plainclothes officers used force to put down a rally against the government's pandemic policies.

The police dispersed protesters who gathered outside the parliament building in Belgrade using teargas, batons, armored vehicles, attack dogs and horses. At one point during the demonstration, protesters pushed their way into the parliament, but they were quickly repulsed by police.

Some journalists witnessing the dramatic events said it brought back memories of chaotic post-election demonstrations in 2000.

Mass protests of mostly angry youth, clashes, teargas, and stampedes in Belgrade tonight. Tasted like 2000 way too much. Vučić simply refuses responsibility for disastrous measures during the pandemic, at the cost of social unrest. Peak impunity, and the outcome we all feared.

The protests began on the evening of July 7 after the government announced a weekend curfew in Belgrade in response to a surge of COVID-19 cases across the country.

Protesters took to the streets to decry the way the authorities have mishandled the pandemic response and rail against corruption.

All about the vote

In a controversial move, Belgrade declared 4,000 persons who had previously tested positive to COVID-19 as “healed” on June 7, reducing the official number of active infections by about 10 times.

Epidemiologist Zoran Radovanović complained at the time that the patients had been “written off by an act of the quill, it was an administrative decision.”

When the election was eventually held on June 21, the ruling SNS party won an overwhelming majority of seats.

Opposition parties boycotted the vote, arguing that neither the government nor the pandemic had allowed conditions for a free and fair vote.

The protesters included a wide range of citizens, from left-wing students to right-wing groups, who coalesced without prior organization in front of the parliament.

In case anyone wonders how many people are there…

‘Why did your father die?’

In true populist fashion, Serbian government officials at first ridiculed the virus and repeatedly minimized its danger. Then, after backtracking and imposing strict quarantine measures in April, they completely relaxed those measures in the buildup to the vote.

A report by the Balkan Investigative Reporting Network (BIRN) published on June 22 indicated that the government covered up COVID-19 deaths. President Aleksandar Vučić dismissed the report, but few are convinced by his position.

Meanwhile, the southwestern provincial town of Novi Pazar has become a virus flashpoint due to a spike in cases and a shortage of medical supplies.

The soundbite “Dad, this is for you” (Ćale, ovo je za tebe) from an interview on N1 TV became a slogan of the protests.

Protester: Tear gas, live rounds, batons, everything against barehanded youth. Dad, this is for you, who died while there were no ventilators… Dad I love you very much, I do this for you and for my recently born son.
Journalist: Why did your father die?
Protester: Because there were no ventilators. To this day I haven't received his tests, the paperwork said that he died from the corona [virus]. No ventilators were available in the hospital in Zemun. That's according to the official report. While they [the government] were bragging that we donate ventilators abroad. Dad, this is for you, daddy! I know you would have been proud!

The following day, Serbian President Aleksandar Vučić denied the claim that the protester's father, painter Ljubiša Đurić (71), died due to lack of ventilators. In response, the protester published his father's medical history report, that indeed admits “lack of free places.” He has demanded an apology from the president.

Protesters and TV crews documented some of the most poignant scenes from the evening:

Today the cops shot a can of tear gas at me, and I responded with a volley kick and gave it back to them. Another protester filmed that and here I am…

The police is losing control and is beating people up.

Some Belgrade riot police seem to be beating people completely unprovoked. These three men are sitting on a bench as a column of police walk by. Some police break off from the group and beat them. The men don't fight back, they attempt to retreat, but the police continue beating. pic.twitter.com/ankJg5IkTt

At around 3 AM on July 8, the police dispersed the protest, although some demonstrators remained in the vicinity of the building, broadcasting what they had just seen and experienced.

I think that the state has to truthfully inform its citizens. If the state doesn't want to, then we have to force it to do it. That's it. That's our role in this society… I am a father of two small kids and I hope my children will live in a better state than the one I grew up in. That is my wish and my goal. This is what I'm fighting for. And that's the end. Good bye and thank you.

According to data provided by the Serbian government to the World Health Organization and compiled by Johns Hopkins University as of July 8, the country had 16,719 confirmed cases and 330 deaths from coronavirus.