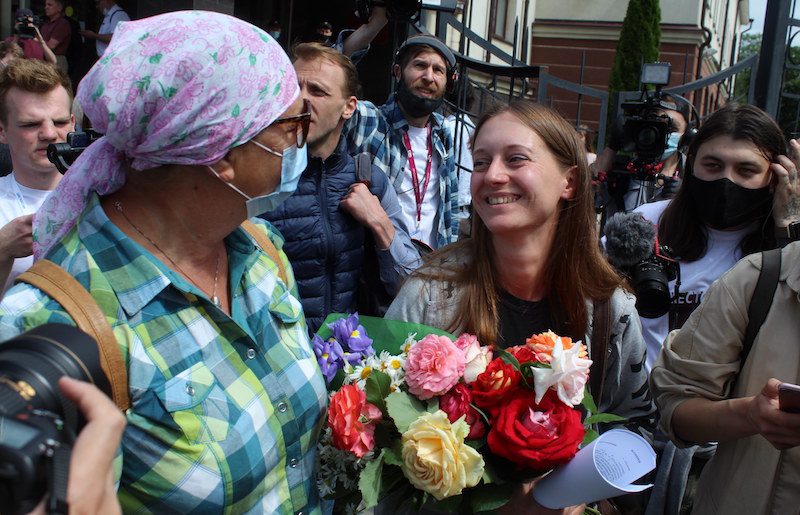 When journalist Svetlana Prokopyeva left a courtroom in Pskov on July 6, her supporters gathered outside were relieved. They had expected to bid her farewell before a six year prison sentence, as demanded by the prosecutor. Instead, Prokopyeva walked free — though had to pay a fine of 500,000 rubles (about US$7,000) and surrender her computer and mobile phone. The verdict of “justifying terrorism” remained in force against the freelancer, who works extensively with the local branch of Radio Svoboda.

Such pleasant surprises are few and far between. In Russia, prosecutors usually get their way, particularly when it comes to cases of any political sensitivity — and Prokopyeva's was one of the most sensitive and most controversial of recent years. In 2018, the 17-year-old anarchist Mikhail Zhlobitsky blew himself up in the lobby of the Archangelsk branch of the FSB, Russia's domestic security service. Three servicemen were injured. In response, Prokopyeva wrote an article which noted Zhlobitsky's anger at repression and torture cases in Russia and situated the attack in a context of shrinking political freedoms. The Russian authorities took it as evidence of Prokopyeva's supposed support for Zhlobitsky's actions, and charged her under Article 205.5 of the country's criminal code.

Investigators raided Prokopyeva's home and added her to an official list of “terrorists and extremists.” The offending article was blocked at the request of Roskomnadzor, Russia's state communications watchdog. Prokopyeva argued, and still argues, that the prosecution has never provided sufficient evidence of what exactly constitutes the “justification of terrorism” in her work.

Over the following months, Russian journalists and international human rights organisations rallied to Prokopyeva's cause. Shortly before the final verdict, editors of dozens of Russian independent publications warned that her case could set a chilling precedent for their work. Journalists who protested in support of her on July 4 were themselves detained:

А long night. At least a dozen of journalists in Moscow who protested against the prosecutor's request for a six-year prison sentence for Svetlana #Prokopyeva are still in detention. Those who have been released risk of a fine up to €4,000. pic.twitter.com/8pSWsZIb0q

In a July 7 interview, Prokopyeva credited this surge of public interest in her case with the outcome in court:

It's impossible to get inside a judge's head and figure out why they decided not to imprison me. In fact, it was precisely [the threat of] a prison sentence which brought journalists from dozens of federal media outlets to Pskov. I saw them gathering before the front doors. It's clear that the judges didn't need a new wave of public indignation. It might turn out that there is something wrong, something not right at all, about not having any doubts about all this: taking an ordinary person, a journalist, who hasn't wronged anyone and putting them in jail. Yes, the verdict says that my guilt has been demonstrated, but at the same time the judges saw diametrically opposed conclusions from experts and the opinions of experts who convincingly proved my innocence. Moreover, they witnessed the reaction of journalists and society at large: that shows that nobody apart from the prosecution sees any “justification of terrorism” in my text. This is an opportunity for them to loosen the screws and at least, if not offer justice, then abandon such brazen cruelty.

Nevertheless, many Russian public figures have suggested that a celebration is premature until and unless the verdict is overturned. This is the key distinction between Prokopyeva's case and the prominent campaign to release Meduza reporter Ivan Golunov, against whom the Russian authorities dropped their criminal case last June.

Lev Shlosberg, a prominent journalist and head of the regional branch of the opposition Yabloko party in the Pskov region, noted the following:

The court's decision on Svetlana Prokopyeva's case represents a forced compromise within the police state. It cannot offer justice to a [wrongly] accused person, because that would bring down the foundations of the system, but it is forced to respond to public opinion. For civil society this is no victory, but is nonetheless a real achievement. The main thing is not to relax and to refuse to accept an abnormal state of affairs.

Svetlana Prokopyeva's case has significance far beyond the borders of Pskov Region. I stand in solidarity with the Human Rights Council's Committee on Freedom of Information and Journalists’ Rights: attempts to understand the causes of terrorism do not make people accomplices to the crime. Svetlana Facing absurd charges of “justifying terrorism”, Svetlana Prokopyeva was threatened with imprisonment and a ban on journalistic activities. The fine she received does not cancel out the absurdity of the charge, which should be reviewed.

These are the reasons why Prokopyeva, who has not been banned from continuing to work as a journalist as the prosecution had hoped, told GlobalVoices that she plans to appeal the verdict as a matter of principle. Her story is not yet over.

But others have just begun.

Russia's human rights defenders are now warning of a new wave of arrests and criminal cases against the country's activists and independent journalists. This comes just after the authorities won a July 1 referendum on constitutional amendments which will permit Vladimir Putin to rule as president until 2036 — a referendum marred by credible accusations of wide-scale electoral fraud.

On July 7, the feminist activist Yulia Tsvetkova reported that a third criminal case had been launched against her (Tsvetkova is already accused of disseminating “pornography” and “LGBT propaganda” for publishing a series of body-positive drawings of female nudes). On July 8 Pyotr Verzilov, a member of Pussy Riot and the publisher of the independent news website MediaZona, was arrested yet again in Moscow.

Like lightning. They detained me after leaving the Ekho Moskvy offices and are carrying out a SIXTH search. The Investigative Committee is working hard.

Meanwhile, police searched the apartment of Taisa Bekbulatova, editor of the independent media platform Holod.Media. The raid on Bekbulatova's apartment was reportedly linked to her friendship with Ivan Safronov, arrested that same day, who is now at the heart of Russia's latest press freedom scandal.

Ivan Safronov, an adviser to the head of Roskosmos, now stands accused of high treason and of passing state secrets to a representative of a NATO member state. Safronov, who started work at the Russian space agency this May, is a former reporter on military issues for Vedomosti and Kommersant, two influential Russian business dailies. In June 2019, court proceedings were held over an article, later removed from Kommersant's website, which he had published concerning a military deal between Egypt and Russia. When Safronov was dismissed after refusing to reveal his source on a sensitive story, many of his colleagues resigned in protest.

Given the nature of the case, it is hard to discover many details about the accusations — given that they are made by the FSB, it will be even harder for Safronov to challenge them in court. He faces 20 years’ imprisonment if convicted.

There is much speculation as to whether the charges might concern Safronov's journalistic work. While Kremlin spokesman Dmitry Peskov dismissed such suggestions, the space agency has officially stated that the case “does not concern [Safronov's] current work at Roskosmos.”

Kommersant has stood by its former employee, praising him as a “patriot” in an editorial statement. Meanwhile, journalists protested outside the Lubyanka building, headquarters of the FSB, in Moscow. Over 20 were detained.

Prokopyeva remarked that the Safronov case shows that Russian journalists will have many struggles ahead:

This is a sore point, as we're now witnessing with the detention of Ivan Safronov, another journalist who did his job and wrote important articles which were relevant for our society. I don't know what exactly the investigators have on him, but from the substance of it, it just seems as though a journalist received information and published it. He didn't have any access to state secrets. So how could he have divulged them? My case, Safronov's, and that of [MediaZona journalist[ David Frenkel, whose arm was broken by police while reporting from a polling station, all attest to the fact that the government a.) does not respect the press as an institution and b.) is shared witless of independent opinions and non-censored media. We journalists must defend ourselves, because without freedom of speech and freedom of the press there will be no freedom at all.

Russian journalist and historian Andrey Soldatov agrees; in a column for The Moscow Times on July 8, he warned that “Putin has entrusted the ‘journalist question’ to the security services.” He outlined the background to that bad omen in an earlier Facebook post:

The case against Ivan Safronov is a completely new level of repression against journalism in this country. Until 2012, it was almost inconceivable that a journalist would be accused of high treason since journalists, by definition, did not have access to state secrets. Hence the FSB had to be very careful in trying to sentence journalists on this article. But when editors changed an article at the request of the FSB, it was understood that the rules had changed too. At the time it was believed that the victims of the new change would be analysts rather than journalists. Today it became clear that this was not so and the FSB has signalled that as clearly as possible. I can come up with only one explanation of why this is happening: they are explaining to us that other topics which are important to society are now closed to everybody apart from “those who should know.”

In response to this multitude of new cases, the popular Russian caricaturist Sergey Elkin drew a cartoon of a journalist standing in a small chalk circle. He is hemmed in by the words “espionage,” “extremism,” “offending the authorities,” “justification of terrorism,” and other offences which have found their way into the country's criminal code in recent years.

Elkin's drawing is a good summary of the uneasy situation in which Russia's independent and critical journalists now find themselves. But in one sense it is too optimistic: Russian journalists rarely know where the line is until after they have crossed it.